MORGAN HILL (CBS SF) -- As dawn rose Sunday, firefighters across the San Francisco Bay Area were able to finally breathe of sigh of relief as the night of 100 or more fire calls came to an end, dozens and dozens of the blazes triggered by the use of illegal fireworks.

The COVID-19 pandemic had forced local officials to cancel the annual July 4 fireworks celebration over fears of the large gatherings the pyrotechnic shows usually draw. That left the night to the amateurs and they came out in what seemed like record numbers.

The largest overnight fire was still burning near Anderson Lake east of Morgan Hill. The so-called Park Fire had grown to 100 acres overnight, was still threatening homes and evacuations were still in place for residents living in the Finley Ridge area, Cal Fire said early Sunday.

Calfire spokesman Chuck Carroll said there was zero containment early Sunday and crews were attempting to halt the fire's advance at Finley Ridge.

Calfire and Santa Clara County firefighters were on the scene, hoping that daylight and air support would finally allow them to gain some contain of the blaze. A cause of the fire was still under investigation.

The Park Fire was among the at least 20 vegetation and structure blazes Santa Clara County firefighters battled late Saturday night.

In Contra Costa County, firefighters found themselves under siege. As soon as darkness fell Saturday, phones at the county fire dispatch lit up like a Christmas tree.

Between 7 p.m. and midnight, officials said they responded to 67 fire calls with the peak coming around 9 p.m. In all, there were 10 structure fires and 27 vegetation blazes. At least 16 blazes were caused by fireworks. 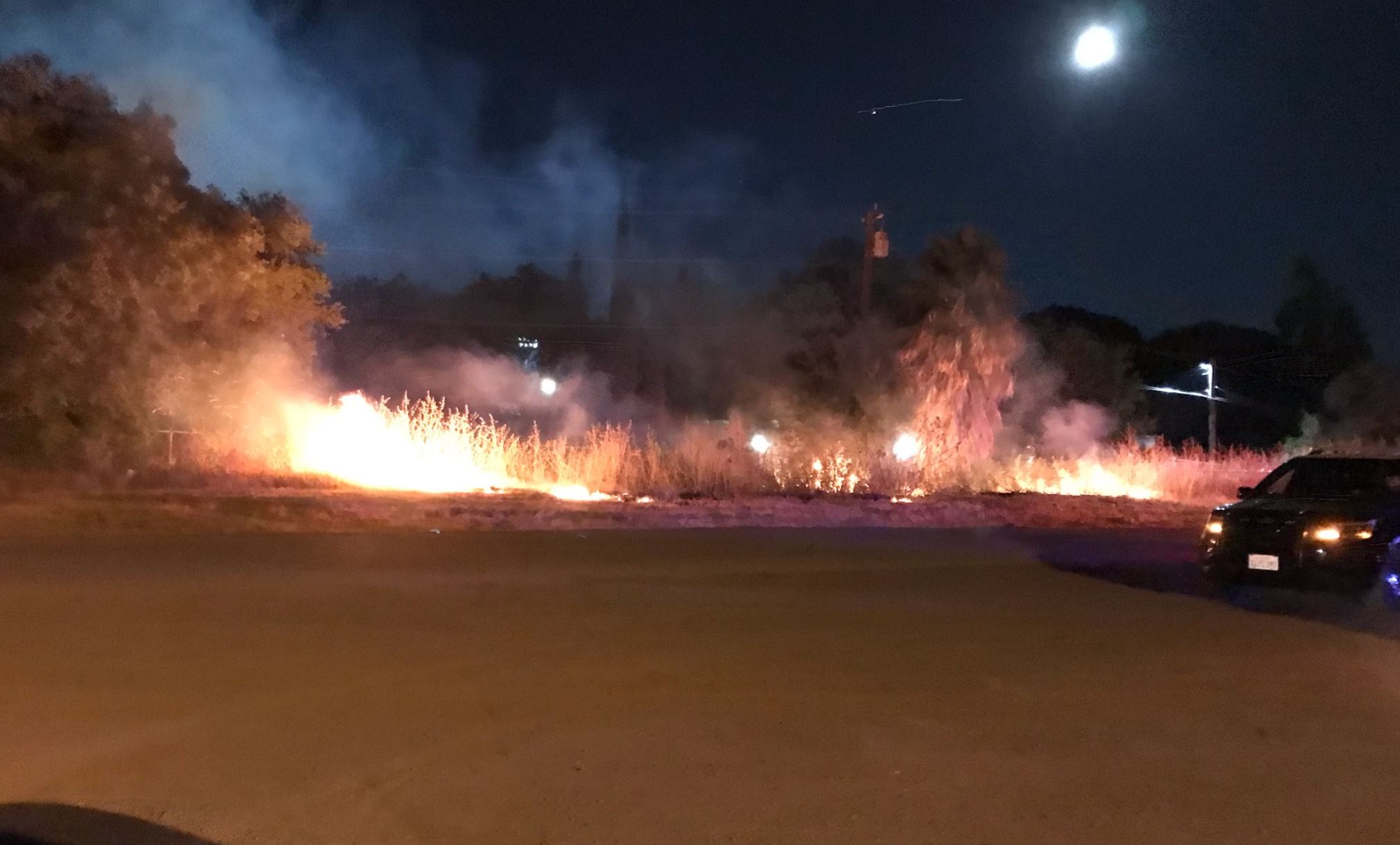 On Twitter posts throughout the night, the plight of department became very apparent.

"Con Fire is currently on scene 12 grass, vegetation and structure fires across the District. In the 9 pm hour we have responded to more than 50 fires. Due to the overwhelming volume of fires we are reducing responses to all but structure fires," read one tweet.

"Several of these are threatening structures & many caused by fireworks -- beyond irresponsible in these conditions, threatening residents, firefighters & homes," read another.

But because of the firefighters' all-out efforts, Contra Costa officials said not one structure was lost during the night.

In San Francisco, a similar dilemma unfolded. Fireworks sparked more than a dozen fires throughout the city. One of the largest was a four-acre blaze in Mclaren Park which was halted as it approached several homes in the neighborhood. 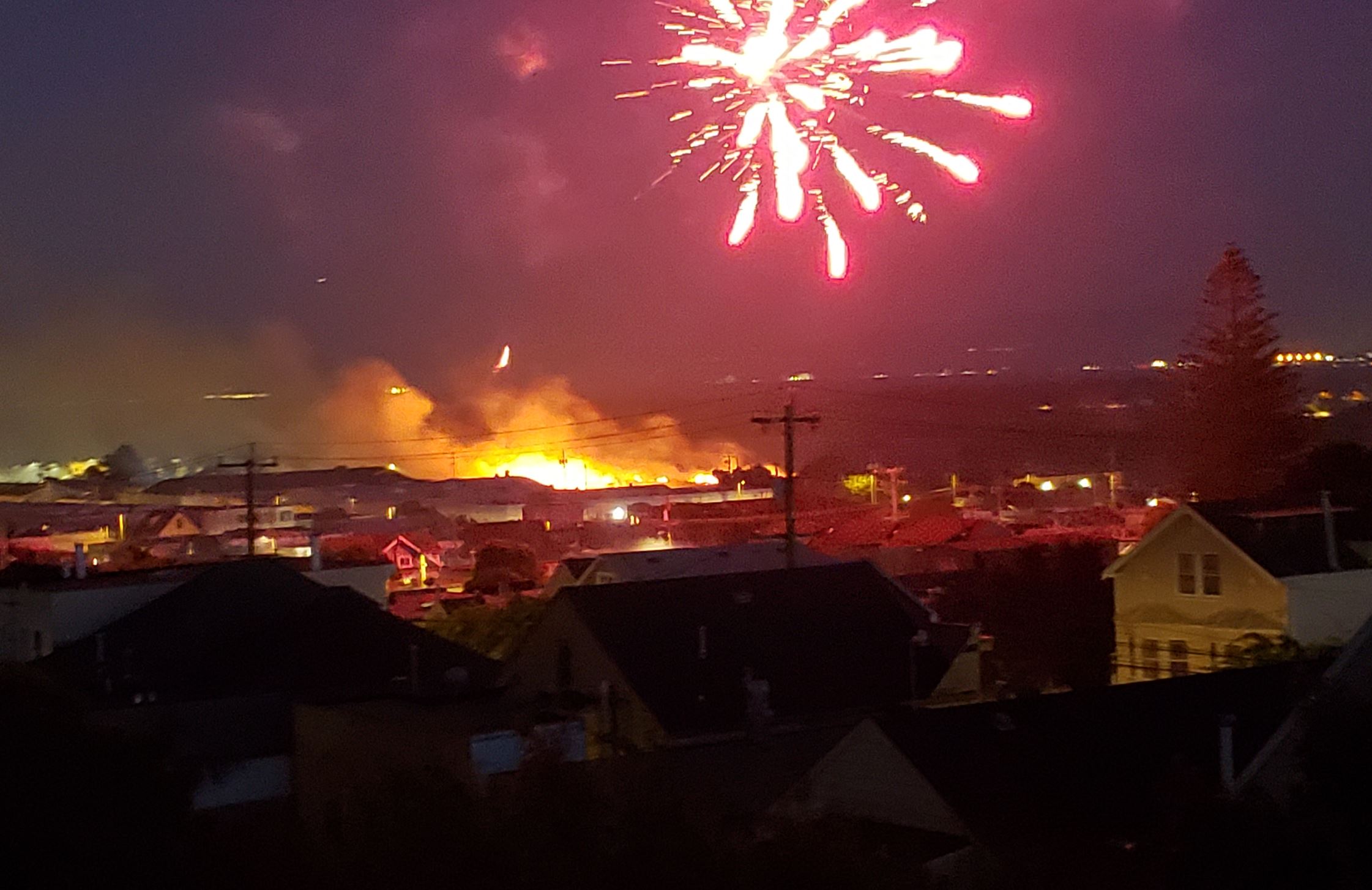 Fireworks also sparked a blaze on a rooftop at 2500 Arelious Walker Dr. and a fire in the Hunter's Point neigborhood.

Fire officials reported more than 20 fires over the course of the evening, including grass fires and structure fires, after 10:30 p.m.

Among many efforts, firefighters were also able to contain a structure fire on Palm Avenue around 11 p.m. There were also multiple reports of fireworks and sideshows happening throughout the city's Mission District.

Alameda County also did not escape the onslaught as illegal fireworks lit up the skies from Berkeley to Hayward. Dozens of fires were reported.

In San Leandro, crews battled a vegetation fire that damaged a commercial building at Neptune Dr. and Williams St. 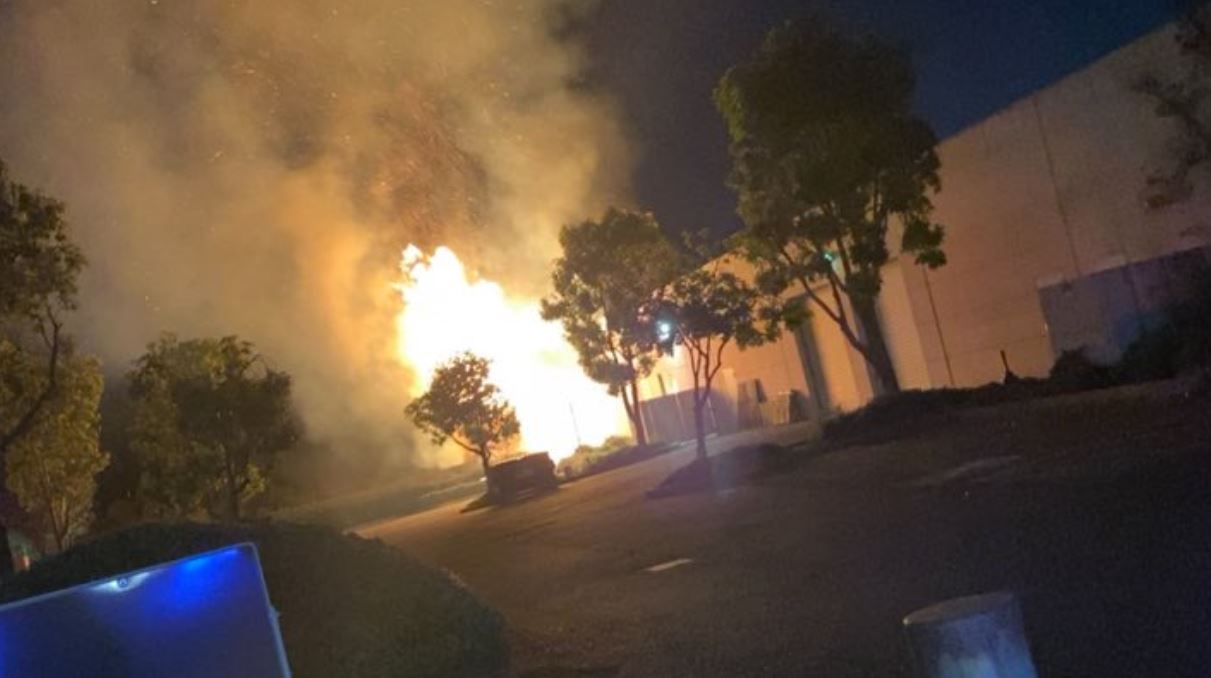 There was a brush fire at Patterson Pass and South Vasco. 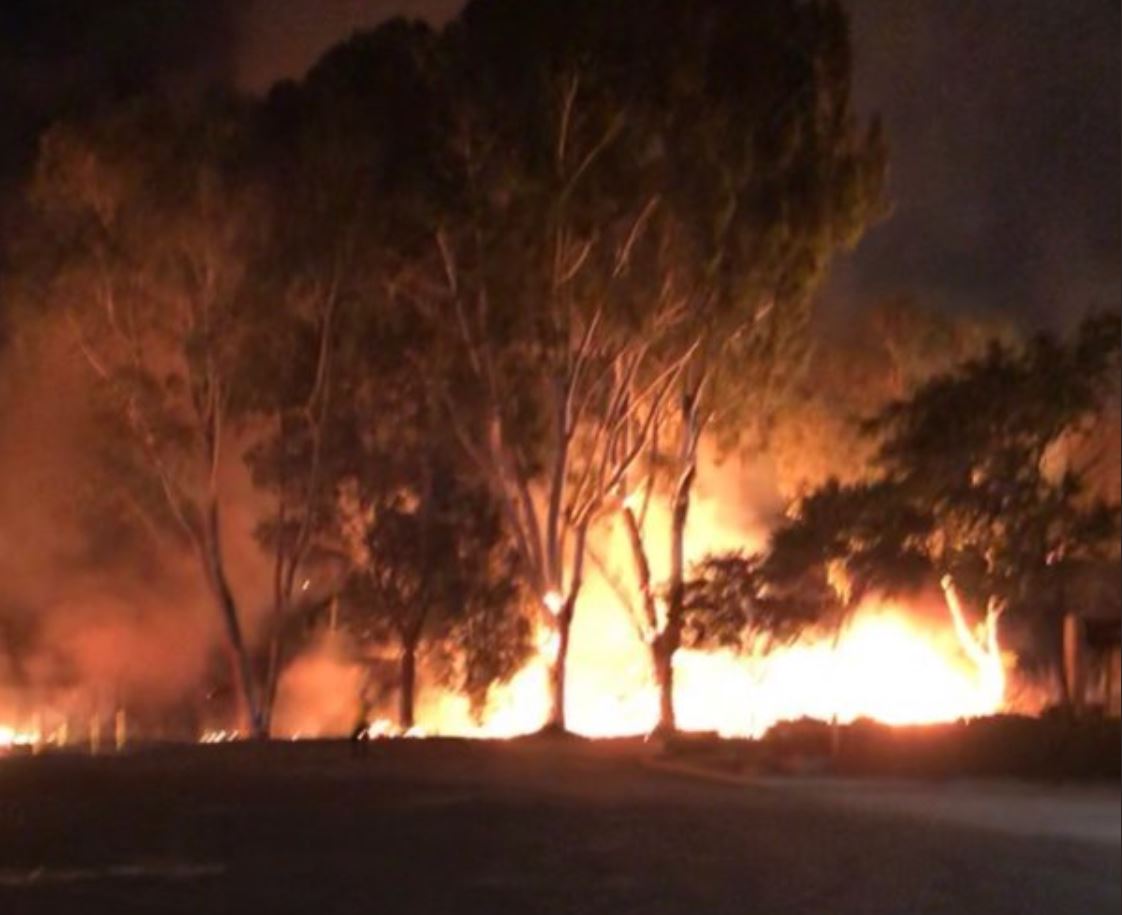 There was a vegetation fire at Thornton Ave. and Hickory St. in Newark. 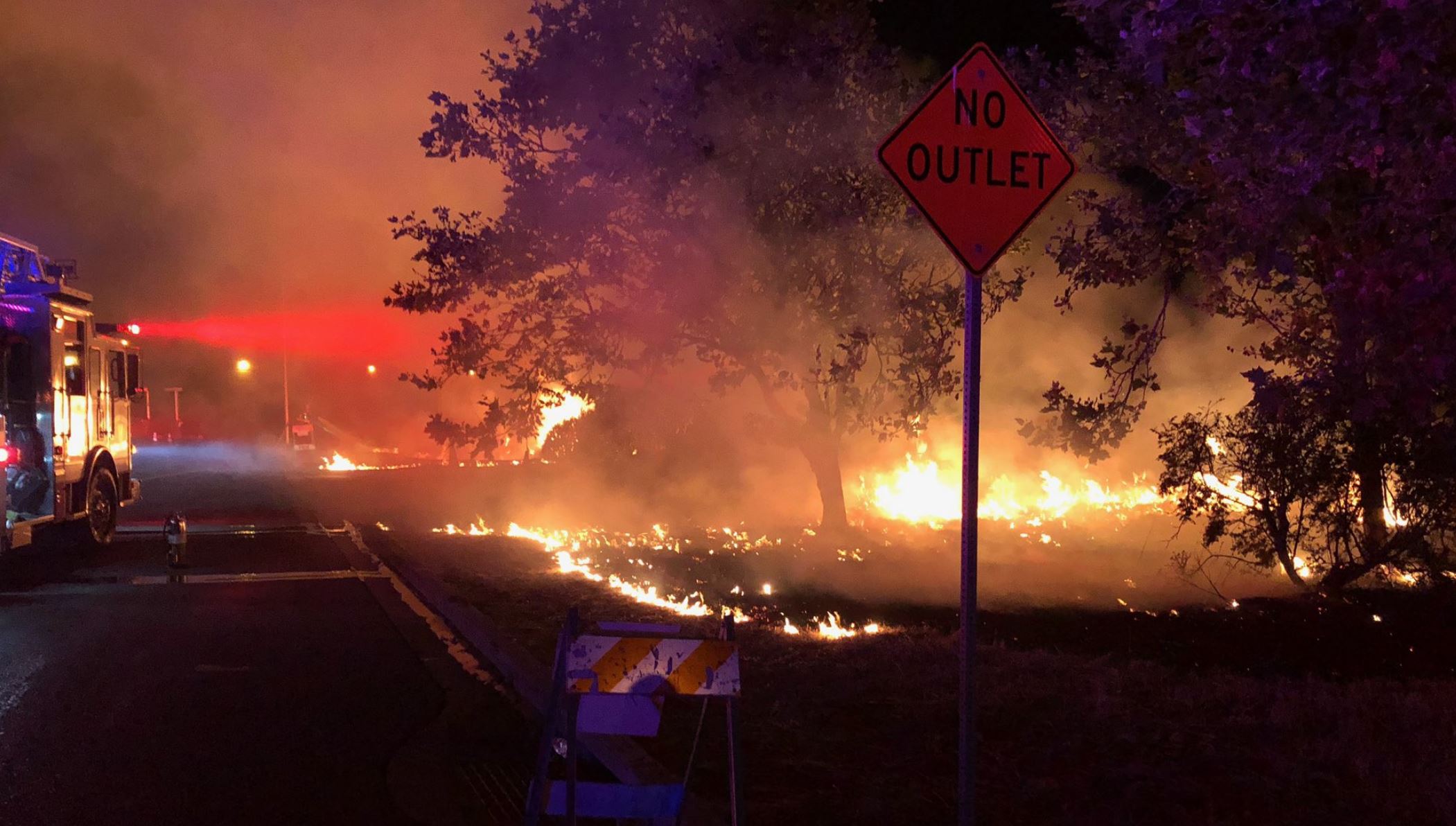 And one on Wells Ave. in Newark. 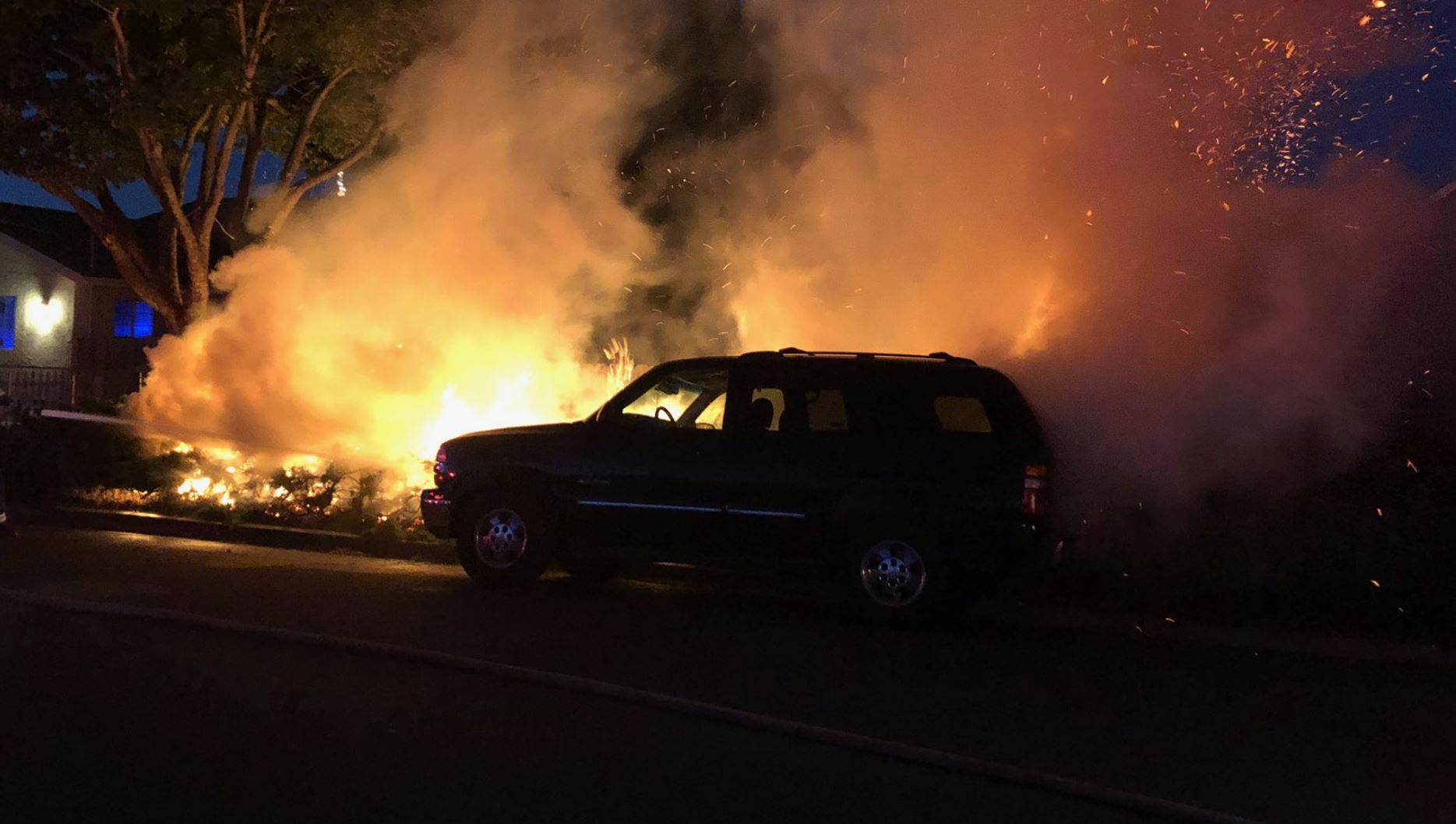 Fortunately, no injuries were reported among the firefighters.