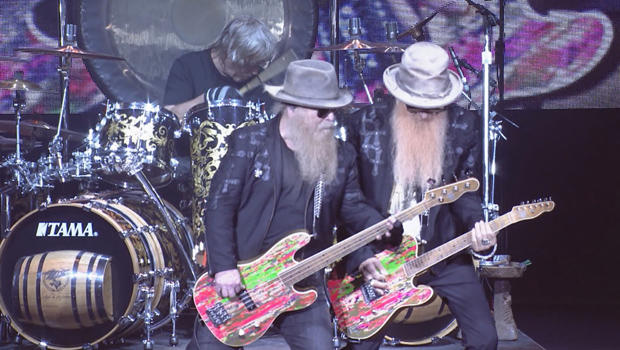 If ever anyone in rock 'n' roll deserved to be called greybeards, it's ZZ Top, the self-described "same three guys playing the same three chords," who are marking 50 years together.

"I'm dumbfounded!" laughed the clean-shaven Frank Beard. "It's longer than we've been married, by a long shot."

Beard plays with two men whose beards would make Methuselah jealous: guitarist Billy Gibbons and bassist Dusty Hill. They met in the summer of 1969 when they were all 20 at a long-gone club in Houston, now an outdoor public art space.

"We started on this very ground," said Gibbons. "It was a club called The Catacombs. It was a day that Frank Beard, the man with no beard, he and I were gathered together to audition bass players. And about that time Dusty strolled up, strapped on the guitar, and I think we wound up playing one song for about three hours straight!"

The first thing they needed was a name, and there are plenty of origin stories to go around – ZZ Hill, B.B. King, Zig Zag rolling papers. "Can we settle this? Where does the name ZZ Top come from?" asked correspondent Jim Axelrod.

Gibbons replied, "It's been 50 years, you have to understand."

"You're not about to settle this now?"

You can ask all you want, just don't expect a straight answer. "I don't know that I know!" laughed Beard.

And while the beards are a trademark, it was not, Hill said, "like, a master plan – Let's go Amish."

But facial hair didn't sell 50 million albums. Their hard-driving bluesy country rock did. That style, the one behind hits like "La Grange, "Sharp Dressed Man" and "Legs" is led by a guitarist who looks like a back country mountain man, but was raised by a man who was an orchestra conductor and concert pianist.

To watch the music video of ZZ Top's "Sharp Dressed Man" click on the player below:

Billy Gibbons was playing with Jimi Hendrix at the age of 17. Hendrix called Gibbons the best guitarist around.

Axelrod asked, "What do you do with that as a 17-year-old? It's a pretty heady experience. I mean, here was a guy that was inventing things to be done with a Fender Stratocaster guitar. And to be in that kind of company was a rather interesting excursion into the unknown."

Axelrod asked, "How do you manage 50 years on the road with such an aggressive touring schedule?"

Hill replied, "I guess we started young enough to where we didn't know any different."

Actually, life on the road presented ZZ Top with a serious challenge, just as they were taking off. Beard recalled, "In the late '70s, I entered rehab. Somebody asked Dusty what he was gonna do. 'Hey what are y'all gonna do, you know? Frank's in rehab.' And Dusty said, 'Well, I'm goin' fishing!'"

Axelrod asked, "Billy, you never thought about getting another drummer?"

What blew up ZZ Top into A-List Rock and Roll Hall of Famers came along in the early 1980s, and what their fans were seeing as much as hearing. They were in early on MTV, which put their hot rod and hot girl videos into heavy rotation.

Beard said of the early music videos, "We started out with some simple ideas. One, we thought, okay, the three of us are not, like, prima donna-looking rock stars, you know? So, let's be the ones watching what's goin' on in the background."

To watch the music video of ZZ Top's "Legs" click on the player below:

The videos are long gone, but not the cars. Billy and Dusty showed us some vintage models in a storage space in Houston. "I had a new car when we started and it's a vintage car now!" Hill laughed. "You know, I'm kidding. I had no car when we started!"

Half a century later, ZZ Top is still working hard to make it all look so easy.  And what may be most remarkable? From the sounds of it, no one's gonna be turning down the volume any time soon.

Hill said, "I've told people, I said, 'Look, if I retired after a few months I would be at your house singing you a song or something!'"

Gibbons added, "We still enjoy this more than anything. We don't really know anything else."

And Hill reasoned, "That's what I'm saying. I have to perform somewhere!"

You can stream ZZ Top's latest album, "Goin' 50," by clicking on the embed below (Free Spotify registration required to hear the tracks in full):