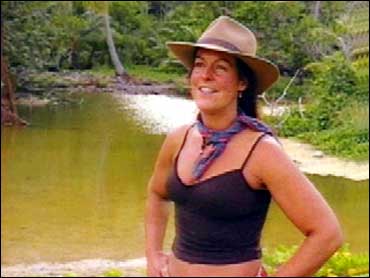 Fishing boat captain Zoe Zanidakis was the latest casualty on Survivor: Marquesas. She joined Jane Clayson on The Early Show and spoke about her time as a castaway.

On the latest episode, Zanidakis is shown telling fellow contestant Tammy Leitner what she really thought of her - and it wasn't very nice. Clayson asked Zanidakis about the relationship between the two.

"Oh, gosh. You don't know. There's so much that went on, on the beach there," Zanidakis explains. "I can't really -- Kathy was a very good friend of mine. And, she still is."

Did she mean to lie?

Zanidakis replies, "Heck, no. It happened. And it's funny how things like that do. It's a sprit that comes out of your mouth, I think."

But she said she did apologize while the two were still on the island.

"We had a -- we sat at the beach and we had a good talk. I let her know that it just -- it wasn't something I had intended to do and it was really to, you know, shut Rob up because he was getting on my nerves."

Zanidakis was proud of the fact that she stood alone, and wasn't really a part of an alliance.

"I was very proud of that," she says. "I don't know if really needed to do that. I could have stood on my own. I'm sure I could have. In the beginning, when John and I created the fire, we did have a bond there. And everybody, we had to have -- I mean, you have to get that bonding, because, you're together for so long on the beach. And, you're working together. I mean, there's an initial bond that just comes out in all of you. You know, it's a friendship. I'm not sure if you'd call it an alliance."

She admits the physical part of the adventure wasn't a problem - more like a day at the office -- or in her case "another day out on the water." She doesn't work out in a gym, but lifting lobster traps and various other items helped with her strength.

She did have a tough time with the immunity challenge. She says, "Well, Tammy is really good at that stilt walking. And I probably could have practiced more."

Zanidakis spoke about some of the other castaways.

Robert "The General" DeCanio's "a good guy," she says. "Gosh, he's awesome. (But) he's a bull in a china shop. He just was always on a rampage. He had a certain sense about him that he's just not real. He just wanted to always, wanted to be doing something. And when he wasn't doing something, then he could be kind of moping.

"Neleh (Dennis) is a sweetheart, " she went on. "She's going to go places some day. She's really a doll.

"Paschal (English) was the anchor of the team there. You really could go to him and just talk."

In early episodes Sean Rector had been made out to be lazy and conniving. Now, he was coming across as a much nicer person. Who was the real Sean, Zanidakis was asked.

"Sean, I think is a person that always shines because has got a great personality. But you never know what's going to go on, on Rotu."

Zanidakis had never seen any of the previous Survivor broadcasts: "Twelve miles off the coast of Maine we get about three stations."

She decided to go on the TV game show because "it was kind of a dare. You know, some friends and I… thought you ought to do that. I've been lobster fishing for 12, 15 years now, and I said, 'Yeah. Great adventure. Let's do it.'"

Because she hadn't watched Survivor she really didn't have a game plan. "It was a bit by the seat of the pants, you might say. (But) I found some good people to follow. I had some good mentors on the show."

Asked if she would do it again, Zanidakis said she'd do it for the adventure, but not for the game. "The game's a game. But being there and exploring the island and just all that stuff."

And like any good castaway she had a surprise for The Early Show. Zanidakis has a pin-up calendar out. Pictures include sailing shots and at least one nude shot.

"It's about life," she says of the calendar. "Not just about lobsters and lobstering. You know, love what you do. Have a passion and live it. You know, just patience, perseverance and part time."

And yes, she's willing to hear from Hugh Hefner.

Harvard President Lawrence Bacow said the order came without notice and that its "cruelty" was surpassed only by its "recklessness."