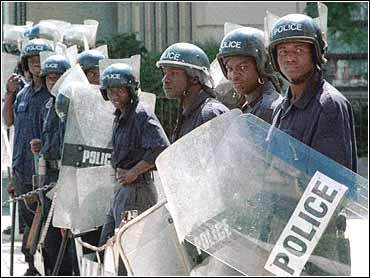 They claim the Movement for Democratic Change's (MDC) salute gives political connotations to normal greetings and farewells. In the petition, submitted to the government Wednesday, they said the open hand-waving motion meant those not affiliated to the party were uncomfortable when meeting or leaving loved ones.

"Waving hands is an international symbol of happiness created by God and using it on political grounds is a total violation of human rights," the petition said.

The petition might seem ridiculous in most countries — not just silly, but an obvious affront to free speech. Not in Zimbabwe.

And of course, all of this is taking place against the backdrop of Mugabe's campaign to forcibly seize white-owned farms and redistribute them to landless black Zimbabweans — a campaign declared unconstitutional by the Supreme Court. But the government said Thursday it will ignore the latest of six court orders demanding that police remove illegal squatters from the white-owned farms.So, in Robert Mugabe's Zimbabwe, a petition to ban a hand signal should be taken seriously.

The MDC launched the open hand salute on its formation in 1999 to denote openness against the clenched fist salute of Mugabe's ruling ZANU-PF party, which has been in power since independence in 1980. MDC party leaders dismissed the petition as a "laughable" propaganda ploy.

It's not hard to discern a pattern here: violence against the press and restrictions on free speech; muzzling the independent judiciary; jailing the ruling party's political opponents. Mugabe's government appears to be increasingly brazen in its tactics, or at the least, in turning a blind eye to attacks on its opponents and critics.

It's also not hard to understand why. In last June's parliamentary elections, the opposition won 57 seats, leaving Mugabe's ruling party with a slim majority of the 120 elected seats, and threatening the president's 20-year reign. In the previous parliament, Mugabe controlled all but three seats.

With his popularity bottoming out, it's understandable that Mugabe wants to consolidate power and stifle criticism ahead of next year's presidential election.

But he should know that the world is watching. Following the Daily News bombing, the European Union issued a statement expressing concern about press freedom in Zimbabwe.

In an open letter to Mugabe, the Committee to Protect Journalists was more frank: "These violent attacks appear to be part of a deeply disturbing campaign against the Daily News and its staff, which have suffered frequent and ongoing harassment at the hands of police and top-ranking officials of the ruling ZANU-PF."

Mugabe should consider the fate of his former ally in Congo, Laurent Kabila. Like Mugabe, Kabila was a paranoid dictator with a worldview shaped by colonial-era politics. And like Mugabe, Kabila had a dim view of critics. Kabila, of course, was murdered January 16 by his bodyguard.

By ROB MANK
©MMI Viacom Internet Services Inc. All Rights Reserved. This material may not be published, broadcast, rewritten, or redistributed. The Associated Press and Reuters Limited contributed to this report