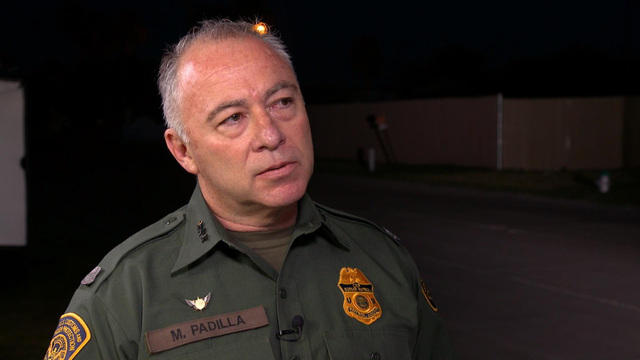 Manuel Padilla, chief of the Rio Grande Valley Sector of Customs and Border Protection, is responsible for the busiest area of illegal crossings in the country and for implementing the Trump administration "zero tolerance" policy that has drawn fire for separating families at the border.

The Rio Grande Valley Sector, Chief Padilla said, is the site of 40 percent of all apprehensions of people illegally crossing the border. He also noted it is responsible for 44 percent of all marijuana seizures at the border.

"It's a very complex situation," he told "CBS This Morning" co-host Gayle King. "When you have high levels of activity, and a lack of resources – personnel, technology, infrastructure – it creates this kind of chaotic environment."

"I know this is complicated for you and your team, but what people are talking about is cruel and inhuman behavior, is how it's perceived," said King. "Do you actually agree with this policy?"

"I do agree that we have to do something. We created this situation by not doing anything," Padilla said. "So what happened with zero tolerance is, we were exempting a population from the law. And what happens when you do that, it creates a draw for a certain group of people that rises to trends that become a crisis."

"I'm going to give you an example: Because we were releasing family units, May 2, just last month, we had a full-blown MS-13 (gang member) accompanied by his one-year-old child. He thought he was going get released into the community; that was not the case."

King asked about the stories coming out of mothers separated from children. "I met a woman yesterday; they were separated for six days. She was fleeing because she was afraid of gang violence. Help us understand why some of the families are being told that 'Your children are going to be taken to be given a bath,' and then they don't see their children. How is that OK?"

"That's misinformation that is out there," Padilla replied. "There's a story about removing a child from a breast-feeding mother – absolutely not true. Every family member gets a sheet with information to keep track of their child, to get information where that child is, and they're all reunited at the end."

"Where I was yesterday, I had parent after parent tell me they weren't told where their child was going, that their child was just being taken away, that they had no way to communicate with their children. That's not misinformation – that's what I heard with my own ears," King said.

"How is it misinformation if they're saying it to me? Are they not telling the truth to me?"

"We came out with a sheet that we give to the parent because that was a potential gap of information. Parents are being apart from their children need information what is going to happen. So this information sheet that explains the entire process: you violated the law, you are going to go through the judicial process. While going through this process, you are going to be separated from your child and then reunited at the point when you serve your sentence."

King asked, "Does it seem like a cruel and inhumane treatment to you?"

"Do you think we're all too emotional about this?"

Over 90% of Afghans seeking to enter U.S. on humanitarian grounds rejected