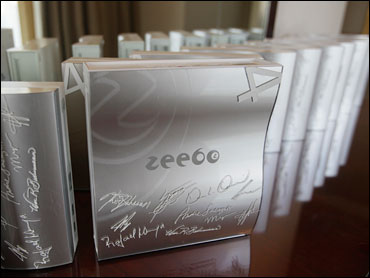 A startup called Zeebo Inc. is betting that people in emerging markets want to play good video games just as much as people in the U.S., Western Europe and Japan do.

Zeebo plans to launch its "video game console for the next billion" in Brazil next month for $199 and in other countries later this year for $179. It was developed using the cell phone technology of Qualcomm Inc., the San Diego company best known for its mobile phone chips.

The Zeebo unit is light, and a little larger than the Nintendo Wii. But instead of playing video games on disks, the Zeebo will use digitally downloaded games - distributed through cell phone networks that players don't even have to subscribe to.

The console is not meant to directly compete with the latest, powerful devices like Sony Corp.'s PlayStation 3, Microsoft's Xbox 360, or the Wii.

Rather, said Zeebo CEO John F. Rizzo, it is targeted at consumers in emerging markets like India, China, Brazil and Eastern Europe who generally can't afford the latest high-end consoles, or the games published for them. In many of these countries, cell phone service is more readily available and cheaper than wired broadband.

Zeebo, unveiled Monday at the Game Developers Conference in San Francisco, attaches to any TV and uses a fraction of the electricity that high-end gaming consoles need. Its batteries can be juiced with what looks like a typical cell phone charger.

The Zeebo's technological capability is somewhere between that of the original PlayStation, which launched in 1994, and its 2000 follow-up, the PlayStation 2. By U.S. standards this won't elicit many oohs and aahs, but Rizzo said the vast majority of the Zeebo's target market has not played an ultra-realistic modern video game. In Brazil, for example, a two-decades old system called Mega Drive, called Sega Genesis in the U.S., still sells well, said Reinaldo Normand, Zeebo's vice president of business development and licensing.

Zeebo hopes that by improving on systems like Mega Drive and offering wireless downloads of games, it will attract the emerging middle classes of India, China and Brazil to modern video games. A game like "Quake" may be old news to an American gamer today, but in 1996 it blew people's minds - just what Zeebo hopes it will do in Brazil.

Big game publishers like Electronic Arts Inc., THQ Inc. and Activision Blizzard Inc. have agreed to make their games available for Zeebo. The question now is whether its target market, which the company estimates to be as big as 800 million, will sign on as well.

So far, video game consoles have not been successful in emerging markets. In addition to the price barrier for many consumers, piracy is widespread, which scares game publishers away. But Zeebo believes its wireless delivery of games will ward off piracy because there won't be physical game disks to copy.

Zeebo plans to sell games for a few dollars more than what pirated games cost on the black market (about $10 in Brazil, for example, compared with about $100 for a legally available game), hoping that the ability to buy games from the comfort of home will lure consumers. Next year, the company plans to drop the price of the console to $149.

Mike Yuen, senior director of games and services at Qualcomm, compared the Zeebo's content delivery system to the Amazon Kindle, the electronic book reader that requires no subscription fees - just the purchase of the device and the content. Zeebo also said it plans to let customers have access to the console's broadband wireless service by connecting the device to their PCs.

Zeebo did not say how much money went into developing the console, but Rizzo noted that the company has only five full-time employees. The system, he said, is "designed from the ground up to be economically viable."

"Launching a new console is not for the faint of heart," Rizzo said.

Zeebo's launch reminded some people in the industry of the Phantom gaming system, which earlier this decade tried to digitally distribute computer games - but didn't really get anywhere. However, Wedbush Morgan analyst Michael Pachter pointed out a key difference. While the Phantom was meant for U.S. markets, which already had easy access to high-end gaming consoles, the Zeebo taps an entirely new market.

Citing McDonald's, which popularized the fast-food hamburger, and Wal-Mart, the mother of one-stop stores, as examples, Pachter said "anyone who's ever made money in business has exploited an unexploited market."