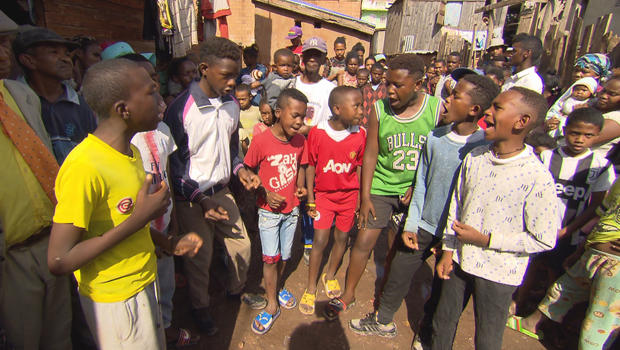 Amid the hubbub of the bustling capital of Madagascar, Antananarivo, it was the most unexpected sound: pure, simple, the voice of a boy, barely a teen …

"The first song that we heard was Jimmy singing, and it was a song of giving thanks to God for his life," said Virginia Summers.

The song's meaning later struck Summers more, considering they're in an island country in the Indian Ocean where nearly 80 percent of people eke out a living on less than $2 a day.

It was 2018, and they'd been driving through Antananarivo: "We were both kind of sitting there lost in our thoughts. That song hit, and we both went, 'Did you hear that?'"

Virginia and her husband, John Miller, who works at the U.S. Embassy, tracked down that boy, Jimmy, and learned he'd started an a capella group with his friends. They didn't have a stage, just the street. And it didn't matter.

Correspondent Seth Doane asked Summers, "What is it about this music that touches you so much?"

"It's honest," she replied.

Miller added, "They are amongst the poorest of the poor in Madagascar, and it's just almost inconceivable that this could have been happening. Yet, there it was."

The two were so struck by the boys' talent, they started taking videos and posting them online. In the last year, those videos have been viewed millions of times.

Doane found them in a sort of slum in the center of Antananarivo. It's a neighborhood so poor that, after it rains, raw sewage flows down open pathways.

The place teems with activity. But when the singing starts, the chaotic lives around them seem to freeze.

The boys, who are ages 11 to 16 and mostly related, are: Rija, Tojo, Taheri, Thierry, Aitra, Jimmy, Njato and Rivo.

So, how did they learn to sing like this? "I hear people singing outside, so I tried to copy," Njato said.

"I didn't really learn it," Taheri added. "I sort of inherited it from my family."

With such tiny homes, life pours onto the little alleyways. Here, music provides a soundtrack to life, or an escape from it. And while not all exhibit the same raw talent, most do share unbridled enthusiasm.

One of the boys in the a capella group, 11-year-old Aitra, showed Doane where he lives, packed in with his parents, a family of eight.

"Now that I've grown up, I'm no longer comfortable sleeping in the same bed as my parents," he admitted.

It's a hardship, his father said: "I don't know if it's our fate from God, but we try to raise our kids to the best of our ability."

The proud parents have posted awards for the boy's group, Zaza Kanto.

Doane asked, "Did you know that he had this talent for singing?"

"The talent comes straight from the both of us," his father said.

His mother added, "I knew he has a good voice."

Those voices, and their gusto, grabbed Nicole Bayer, one of Miller's colleagues at the U.S. Embassy. She was putting together a music event when she saw a video of the boys, and immediately invited Zaza Kanto to contribute.

Doane said, "You don't think of an embassy as caring about a group of kids on the street singing?"

"Well, for us, it's important to build bridges of understanding between Americans and the countries where we serve," Bayer replied.

Doane asked Austin, "How rare is this sort of raw talent?"

"For eight kids, very rare," he replied. "They were singing out their love for music."

Austin, whom Doane met in New York, said he's mentored musicians in about 50 countries, but was still marveling about those boys he'd met in Madagascar – and how quickly they learned.

"One of the things that we incorporated into our workshops with them was beatboxing, which is mouth percussion," said Austin. "And when you add that to their already amazing vocals, it's just, 'Wow! Oh my goodness, these kids are incredible!' And they picked it up quick."

The workshops concluded with a concert, which was nationally televised. Bayer said, "Clips of that concert, we put on the Embassy Facebook page, [and they] instantly went viral. It really is a magical group."

They dream of a record deal. But their lives haven't changed much, nor has one appointment they always keep. Each Sunday they walk about an hour from their slum to a nicer part of town, constructing a homemade rugby ball along the way to pass the time.

Their destination is a hostel called the Underground, where they first met Summers and Miller back in 2018.

On a good day, they can make about $20 – a lot of money here – and they can always count on at least two very enthusiastic fans.

"Sunday's my day for joy," Summers said, listening to the boys perform. "This is something that is so meaningful for us, to create a relationship with these boys. It's something that they give to us, quite frankly."

The boys told us they love how they feel when they're singing. It gives them strength and a chance to dream.

And for those in earshot, Virginia Summers says, this pure sound transforms a city which can be inhumane into a place that's "utterly human."