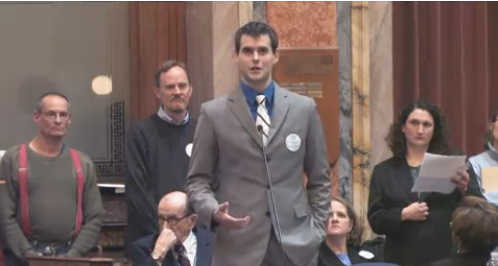 (CBS) LOS ANGELES -- Zach Wahls captured the attention of the nation this week after a speech he delivered defending gay marriage in front of the Iowa House of Representatives went viral on YouTube.

The 19-year-old University of Iowa student spoke during a public forum against House Resolution 6, which would end civil unions between same sex couples. It's a subject that is very near and dear to Zach's heart too. He himself was raised by two women who are now married.

I recently spoke to Wahls about the powerful video that has been circulating the web like wildfire and catching the attention of everyone from Arianna Huffington to Ellen DeGeneres. His speech is even being compared to City Councilman Joel Burns' emotional video for the It Gets Better Project.

"I was sitting at work Tuesday afternoon... and one of my co-workers walks over and is like 'Do you realize you're all over Facebook and YouTube?' and I was like 'Excuse me?' I guess this is what it feels like to go viral. I'm shaking."

He told me he thinks this resonated because, it's "an issue we talk about so much. It's really easy to talk about this issue without putting a face to it. But what I bring to the table is that I'm a face with this issue. It's really easy to talk how bad gay marriage is until you realize that the people living down the street, they're one of those couples. Their son, a member of our community, is one of those kids... It was also such an emotional moment for me, and I think a lot of people are connecting with that as well."

Besides the slew of positive and incredible feedback online, he said he's even changed some minds. "I got a message from a guy who's going to ship out to the army in two weeks, that he had totally opposed to this before but after seeing the testimony, he was in full support. He had been really hesitant about the repeal of DADT, but after this, didn't have any worries about it."

So does he see more politics and public policy in his future? Wahls told me he plans to continue to pursue his major of engineering and write a weekly column for a local newspaper. While the resolution did get passed, the cause, is something he will continue to support and fight for.