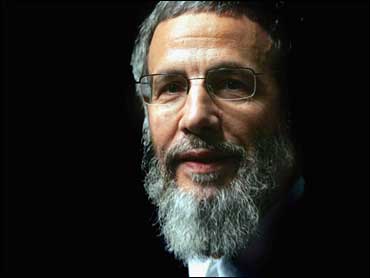 Yusuf Islam, once known as recording artist Cat Stevens, walked away from the music business at the height of his career.

As Stevens, he had written and recorded several hits in the 1970s, including "Moonshadow," "Peace Train" and "The First Cut Is The Deepest," which was also a hit for Rod Stewart and, later, Sheryl Crow. He sold an astonishing 60 million albums.

But after converting to Islam in 1977 and adopting his new name, the singer took a break from recording. This year, he released "An Other Cup," his first original album in nearly three decades.

"In this time and period it's probably the best thing I can do because lecturing, politics, God, I've got nothing to do with that," he told CBS News Sunday Morning correspondent Mark Phillips. "I want to just get heart-to-heart, make sure people understand some of the real subtle beauties of what I've discovered."

He said he personally developed and evolved throughout his career.

"A lot of people would have loved me to keep singing," Islam said. "You come to a point where you have sung, more or less ... your whole repertoire and you want to get down to the job of living. You know, up until that point, I hadn't had a life. I'd been searching, been on the road."

Islam was born Steven Dmitri Georgiu, in London in 1948, to a Greek father and Swiss mother. His parents ran a restaurant and by age 12 Steven had picked up the guitar and was writing songs in their upstairs apartment.

An early girlfriend told him he had eyes like a cat. He liked the way that sounded and at age 18, Cat Stevens released his first album. He was a teen sensation, touring Europe, when an almost fatal case of tuberculosis made him question what he and his music were all about.

"I caught tuberculosis and suddenly I've got this medieval disease, you know — middle of modern society, and I'm sort of in hospital. And all of the spotlights are switched off. And now I say: 'Well, hey, where is the light?' And that's what got me going, if you like, looking for a different kind of light."

That near-death experience sparked a creative explosion. While recuperating he wrote more than 40 songs, including many from the albums that would guarantee his place in music history. He was destined for stardom, or so it seemed. But in 1975 while swimming off the coast of Malibu, Calif., another brush with death revealed his true destiny.

"I decided to go for a swim. Of course nobody told me that that wasn't a good time to go swimming," Islam said. "So there I was, you know, out there, and I'm thinking, 'Ah, great, hmm, OK, let's go back now.' And then I ... tried to swim back to shore. And suddenly I felt 'I can't do this' — the tide was going the other way. I wasn't getting any closer.

"Suddenly I was petrified. I thought: 'This might be it.' I said: 'God, if you save me, I'll work for you.' It was without hesitation that I knew that, instinctively, there was a power that could help me. And then a little wave, you know, came behind me — a little wave, it wasn't very big. But it was that miraculous moment when suddenly the tide was going in my favor. I had my energy, I could swim back. I was on land. I was alive. Wow, what next?"

After that Islam tried to find a religion that fit. He experimented with Buddhism, Tao, numerology and even astrology. But when his brother gave him a copy of the Koran, the man who had been shopping for answers finally found them.

"I was looking for something that would resonate — the meaning of life at whatever angle you looked at it," he said.

At the time, he was still performing and was hugely popular. He realized he couldn't balance his religion and his career.

"Yeah, when it came to trying to balance you know, this knowledge, this discovery, with my lifestyle, you know, I've been singing about trying to find who I am," Islam said. "Now I've found out, do I have to keep singing? I mean, that was the question."

The answer came in November 1979 at London's Wembley stadium when he walked onstage as Cat Stevens and walked off as Yusuf Islam.

He wouldn't touch a guitar again for more than 20 years.

Reborn and re-energized, Islam went to work fulfilling the promise he had made to God that day off the coast of Malibu. With the royalties from his former life still pouring in, he founded London's first Islamic school. Then he started the small kindness charity helping orphans around the world.

Also that year, he married Fawzia Ali, also a devout Muslim, and together they have five children. Islam worked quietly, avoiding the spotlight — until 1989, when his new life collided with his old.

That year Iran's Ayatollah Khomeini issued a fatwa, an edict, calling for the death of British author Salmon Rushdie for blaspheming the prophet Muhammad, in his book, "The Satanic Verses."

As Britain's most famous Muslim, Islam was asked to comment. While he didn't exactly echo the call for Rushdie's death, his response was open to interpretation.

"Salmon Rushdie, or indeed any writer who abuses the prophet or indeed any prophet, under Islamic law, the sentence for that is actually death. It's got to be seen as a deterrent, so that other people should not commit the same mistake again," he said then.

"I was a sitting target, in a way, for anybody who wanted to make some kind of headline," Islam told Phillips. "I certainly never supported the Fatwa, but when I was asked about ... the actual principle of blasphemy and capital punishment, well, like the Bible, I said, '"You know, yeah, it's there, it's in the Koran.' And I couldn't deny that."

Then came 9/11 and while Islam publicly and explicitly condemned the attacks, an air of mistrust lingered. And so in 2004 while flying to Washington D.C. for a charity meeting he was pulled off his flight and temporarily denied entry into the United States.

"Suddenly I was surrounded by FBI and interrogated," he said in 2004. "For God's sake everyone knows who I am."

Asked by Phillips to comment about current religious tensions in the world, Islam said, "I don't think that God sent us prophets and books to fight about these books and these prophets. But they were telling us, actually, how to live together. If we ignore those teachings ... whichever faith you belong, you profess, then I think we'll be finding ourselves in an even deeper mess."

It was into this climate of rising fear and hostility that fate stepped in yet again to convince the man who had written "Peace Train" so many years ago, that the time had come to sing again.

"A big turning point happened when my son brought back a guitar into the house," he said. "You know, 'cause I'd given all those guitars away to charity way back in 1979. I hadn't really touched the instrument, you know, for like two decades. So one day ... when everybody's asleep and nobody's watching, I pick it up ... and lo and behold, I still know where to put my fingers. Out comes this music. I said, 'Maybe I've got another job to do.'"

Thus he released "An Other Cup" last month. It is his first album of original songs since ending his career as Cat Stevens 28 years ago.

"You know, the cup is there to be filled, you know, with whatever you want to fill it with," Islam said. "For those people looking for Cat Stevens, they'll probably find him in this record. If you want to find Yusuf, go a bit deeper, you'll find him."

Steven Georgiu, Cat Stevens, Yusuf Islam, the man with many names but one voice, has been lucky enough to see his live come full circle.

"Here's a chance, I think, for us to kind of remind ourselves, those things we all commonly enjoy and love and share, try to get back together," he said. "You know, singing out for a more peaceful world today, I think, can only do."