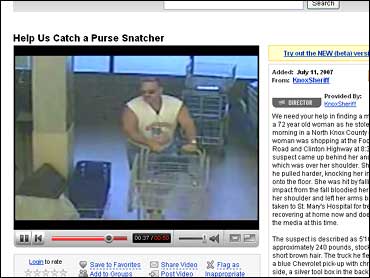 A Tennessee sheriff's department has added the video-sharing Web site YouTube to its crime-fighting arsenal.

The Knox County Sheriff's Office started about four months ago posting surveillance videos of robberies and purse snatchings on YouTube and asking viewers for tips.

"The criminals out there are always trying to think of ways to outwit us," Chief Deputy Tom Spangler said. "These are our tools to outwit them."

A recent posting of security video showing a purse-snatcher knocking down a 72-year-old woman outside a grocery store and speeding off in a truck drew more than 1,800 hits. Spangler believes it also helped generate a tip that led to the arrest of a suspect two days later in Jefferson County.

"Our basic investigative tools are still our feet, our hands and our eyes. You can't replace those," he said. "These new tools just make things work a little quicker."

Previous attempts to solicit tips through the Internet drew mixed results. A joint effort with Knoxville police in 2005 called for using the Web site CitizenObserver.com as a kind of Internet-based Neighborhood Watch, but it drew little public response, officials said.

Spangler believes his agency is now the only one in Tennessee using YouTube to catch suspects. Just two other agencies in the country — sheriff's offices in Florida's Broward and Polk counties — maintain pages on YouTube. Even those pages post mainly public service announcements and tributes to fallen officers rather than surveillance videos.

"This lets the community know we're not just people riding around in marked cars and wearing uniforms," said Donna Wood, spokeswoman for the Polk County Sheriff's Office. "It shows they're real people, and they feel real emotions."

"We usually get a decent response from local media, but the millions of people who have been protected by this video really drives home the worldwide power of the Internet," the sheriff said.

Knox County communications specialist Drew Reeves said that YouTube is a cost-effective, timesaving way to disseminate information without taking up bandwidth on the county's servers.