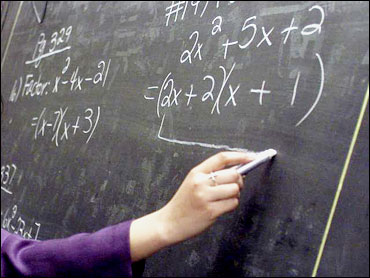 Kids who are turned off by math often say they don't enjoy it, they aren't good at it and they see little point in it. Who knew that could be a formula for success?

The nations with the best scores have the least happy, least confident math students, says a study by the Brookings Institution's Brown Center on Education Policy.

Countries reporting higher levels of enjoyment and confidence among math students don't do as well in the subject, the study suggests. The results for the United States hover around the middle of the pack, both in terms of enjoyment and in test scores.

"We might want to focus on the math that kids are learning and just be a little less obsessed with the fact that they have to enjoy every minute of it," said Loveless, who directs the Brown center and serves on a presidential advisory panel on math.

"The implication is not 'Let's go make kids unhappy,"' he said. "It's 'Let's give kids better signals as to how they're performing, relative to the rest of the world."'

Other countries do better than the United States because they seem to expect more from students, he said. That could also explain why high performers in other nations express less confidence and enjoyment in math. They consider their peer group to be star achievers.

Even efforts to make math relevant may be irrelevant, says the study, released Wednesday. Nations that try to teach math in terms of daily life have the lowest test scores.

All this is not easy to compute. Math teachers typically don't avoid enjoyment, confidence and relevance in their math lessons. They strive for those things.

Speaking on behalf of those teachers, one educator took exception to the study's conclusions.

"If I'm a math student and I don't perceive myself as confident, you think I'm going to major in it? The answer is no," said Francis "Skip" Fennell, president of the National Council of Teachers of Mathematics and another member of the federal math panel.
"Is enjoyment important? You bet it is. Is confidence important? You bet it is," Fennell said. "If we don't have those variables, we can't compete."

Yet Loveless says pleasing kids has comes at the expense of mastering skills.

His findings come from the 2003 Trends in International Mathematics and Science Study, a test of fourth-graders and eighth-graders across the globe. Along with answering math questions, students were asked whether they enjoyed math and whether they usually did well in it.

The eighth-grade results reflected a common pattern: The 10 nations whose students enjoyed math the most all scored below average. The bottom 10 nations on the enjoyment scale all excelled.

Japan, Hong Kong and the Netherlands were among those with high scores and lower enjoyment or confidence among students.

Within a given nation, the high-confidence kids did better than their peers. But that changed when students were compared with a different peer group. Even the least confident students in Singapore outscored the most confident Americans.

Loveless is not suggesting it makes sense to undermine kids' confidence or make math revolting. But he says the U.S. should rethink "the happiness factor," as he puts it.

Math textbooks in the United States, for example, tend to have colorful photos, charts and stories to please kids, he noted. In other nations, the texts strictly have math.

Fennell said engaging, relevant lessons are important. But he agreed with Loveless that every lesson should be about teaching math, not simply providing a fun class activity.