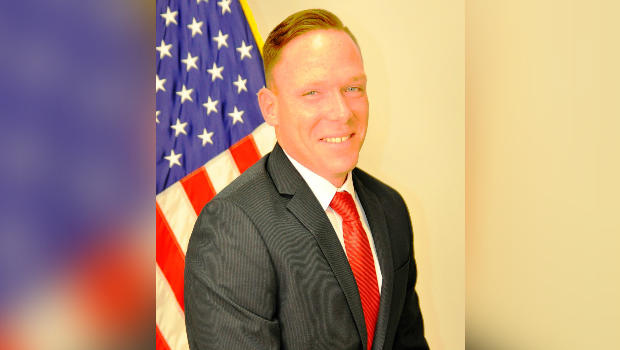 Detective Michael R. Doty, one of the four shot in the line of duty trying to find a domestic violence suspect, died Wednesday, according to the York County Sheriff's Office in South Carolina. CBS affiliate WBTV reports that the officer-involved shooting took place late Monday night in response to a domestic violence-related incident just outside the city of York.

The news of Doty's death, a 12-year veteran of the force, was announced on the sheriff's Twitter feed Wednesday:

WBTV reports the suspect, identified as Christian Thomas McCall, 47, apparently ran on foot around 10 p.m. Monday from the home before authorities arrived sparking an intense three-hour manhunt. He was wanted for allegedly assaulting his wife, authorities said. K-9 officers were called in at the time to help track down the man.

Shortly after 1 a.m. Tuesday, deputies say McCall "fired shots" and ambushed a SWAT team looking for him. K-9 handler Sgt. Randy Clinton, a 34-year veteran, was hit in the leg. Two other officers, Sgt. Buddy Brown and Sgt. Kyle Cummings, were shot. They are expected to survive.

A GoFundMe account has been set up to help the officers with their medical bills and recovery, WBTV reports.

The sheriff's office said McCall was also shot during the incident. He was placed in custody and rushed to a local hospital.

According to the York County Solicitor, McCall is being charged with three counts of attempted murder for the shootings of Sgt. Clinton, Sgt. Brown, and Sgt. Cummings. He will also be charged with possession and use of a firearm during the commission of a violent crime and first-degree domestic violence.

The solicitor told WBTV earlier it was too soon to file charges in connection with Det. Doty's shooting.

Deputies had been called to McCall's house before because he said he was the victim in a domestic disturbance in 2015. The sheriff did not have details about the case. McCall's wife was not seriously injured in the Monday night attack, York County Sheriff Kevin Tolson said.

A neighbor, Roger Gilfillan, said he was stunned to find out who might be involved. "This is baffling," Gilfillan said several times, noting McCall lived in the home with his wife and two children.

"They were real nice people. He just kept to himself," said Gilfillan. McCall frequently walked around the neighborhood, but would only speak when someone spoke to him. McCall never appeared to cause any trouble, Gilfillan said.

State criminal records show only one arrest for McCall. In February 1994, he was charged with assaulting a law officer, resisting arrest and simple assault in Florence. The records did not show what happened to the case in court.

York is about 25 miles southwest of Charlotte.