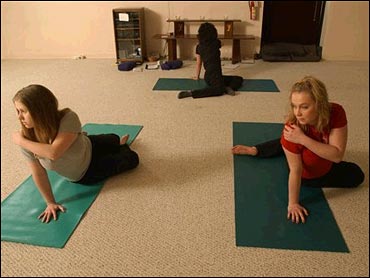 Years after the ancient Eastern discipline caught on big in the United States, yoga is proving to have a suitably limber foothold here. Not only are more people taking up yoga, but it is being geared for American tastes. There is yoga for dieters, for jocks, even for new moms and their babies.

"Yoga is evolving to meet cultural needs," said Yoga Alliance president Hansa Knox Johnson. "We have people who have different kinds of energies. Some of them are go-go, some are kind of more restless, some are more heavy, sedentary. So different yogas are appropriate for different kinds of people."

Yoga has been gaining steam in this country for years. A study released last summer by the magazine Yoga Journal said about 15 million people in the United States practiced yoga — a 29 percent jump from the previous year. The yoga boom probably peaked a year ago, according to The Yoga Research and Education Center, but researchers there still expect interest to remain at higher levels.

Yoga has benefited from the same baby boomer-fueled fitness trend that fills kickboxing classes and aerobics studios. But increased interest in alternative health practices has helped too. Yoga is often championed as a way to bring peace of mind in a jangly world.

"Our biggest spike in enrollment came right after 9-11," said Deborah Foss, executive director of the Albany Kripalu Yoga Center. "I think people were so stressed out, they were looking for a place to calm down."

Relatively few Americans had immersed themselves in the 5,000-year-old discipline when Foss took her first yoga class in 1989. In the years since, a lot of people have been attracted to aspects of yoga: the postures, the controlled breathing, the meditation and the aim of uniting mind, body and spirit. Today, yoga reaches all sort of demographics, from football players to school children to prisoners.

And with more people taking up yoga, more styles of classes cropped up.

Foss favors Kripalu Yoga, which she teaches under soft lights with slow stretches and sweet incantations of "Ommm." But the center offers classes that run the spectrum in terms of physical demands.

Some latter-day yoga offshoots would seem alien to a practitioner from 5,000 years ago, particularly those who focus on the quest for a better body.

Some purists sniff at the likes of "yoga for kickboxing" and trendy yoga wear like "Om earrings" and "Yoga chick" tops with Buddha prints. The fear is that turning yoga into a commodity or merely a physical training tool can obscure its higher purpose.

"The whole thing is to integrate your body, mind and spirit," Foss said. "When we Westernize everything — and the culture is so built upon competition and big, better, more — sometimes we lose the essence of the practice."

But Foss also notes "there's not one right path."

Foss and some other yoga veterans view it this way: While being able to put your leg behind your head is not the ultimate goal of yoga, many forms of it can lead practitioners to other dimensions of yoga.

"Yoga has been around for 5,000 years, and this is just a wave. And if it brings more people to the practice of yoga and they discover yoga's deeper dimensions, then it's a good thing," said Trisha Lamb Feuerstein, director of research for the Yoga Education and Research Center.

Then there's what Feuerstein calls "yoga hybrids and mutants." She found "Yogilates" (a blend of yoga and Pilates); Yo-Chi (yoga plus T'ai Chi); Boga (boxing and yoga); and Smoga (yoga for smokers).

Some of these hyphenated yogas test the patience of even inclusive sorts like Johnson. Yoga has its own philosophy, as do other serious disciplines, and mixing them isn't always a good thing, she said.

With the proliferation of so many flavors of yoga, Johnson foresees a new backlash-driven focus on classic yoga. But she also believes yoga will continue to adapt.

"That's really the ideal of yoga," she said. "It's for all of this to coexist peacefully."

Insider tips to help you train like an Olympian