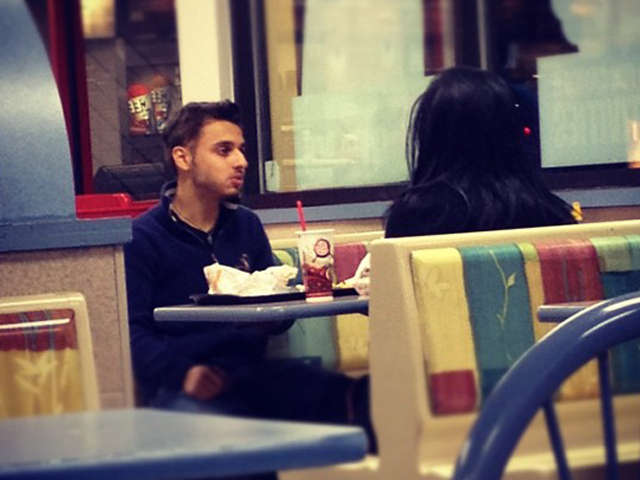 (CBS) - A couple at a Burger King in Boston was too busy having an argument to notice web developer Andy Boyle live tweeting their exchange on the micro-blogging site Twitter.

"I am listening to a marriage disintegrate at a table next to me in this restaurant. Aaron Sorkin couldn't write this any better," Boyle tweeted.

The documentation is a fascinating, cautionary tale of how technology is invading every aspect of our existence. Boyle included photos, videos and even a description of the background music.

Boyle tweeted later, "I want my 75 new followers to understand that I don't regularly livetweet failing marriages at Burger King." It seems like this isn't his first live tweeting escapade, however.

"@andymboyle Of all your live tweet adventures this is by far your best. Believe me. Some have been awful," replied follower @coulterjones.

There have been other shocking cases of  "eavesdropping" via Twitter. In March, comedian Donald Glover live tweeted a couple having a sexual encounter at a Bank of America ATM vestibule in New York City.

Next time you're temped to discuss private matters in a public space, be aware of who's around. There might be more than a few ears listening.

Read the full transcript of the Twitter feed, photos, videos and @replies below, compiled by Vancouver Sun journalist Rhiannon Coppin.