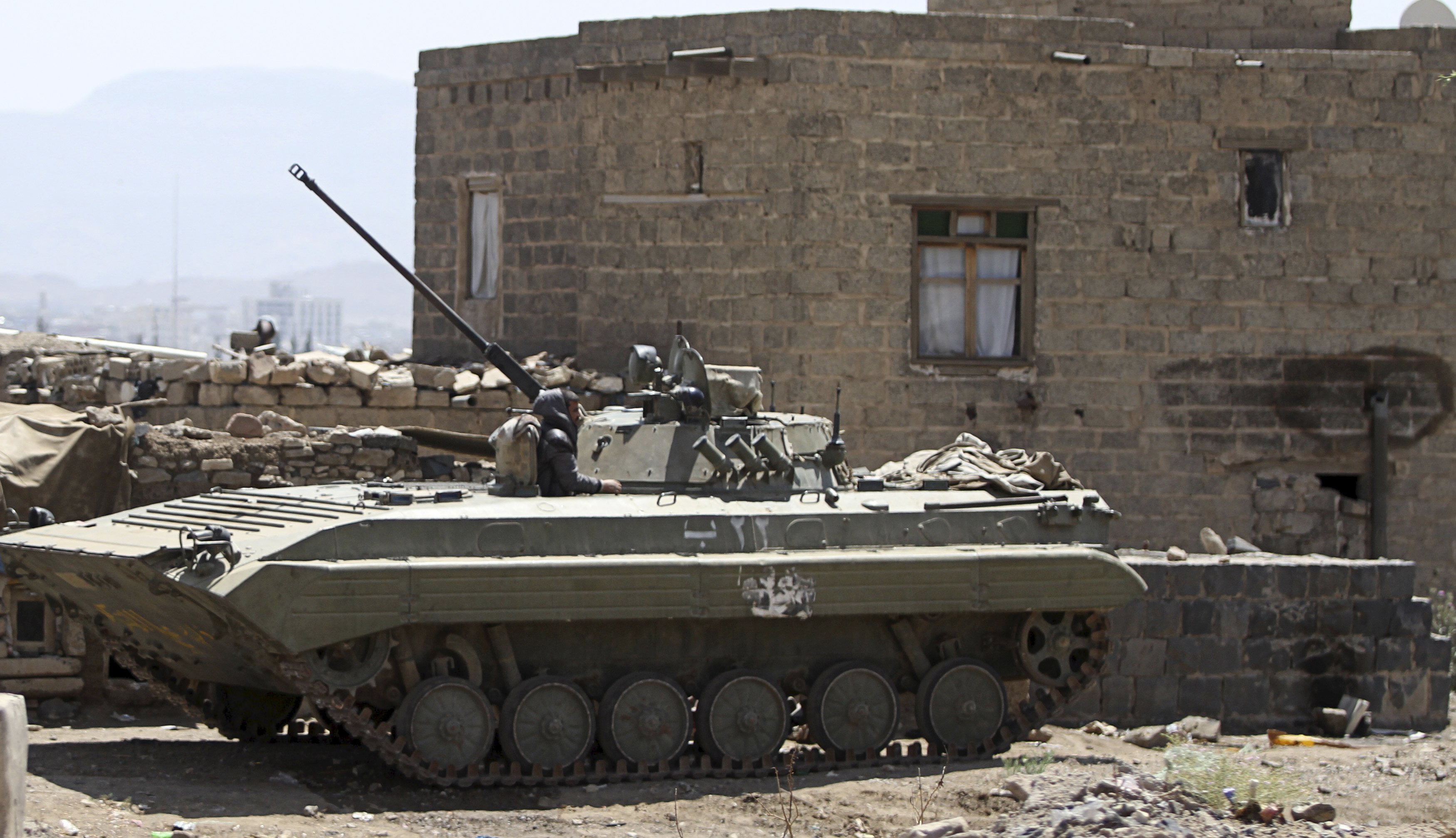 SANAA, Yemen -- Yemen's Shiite rebels and their allies fought their way through the commercial center of Aden on Thursday and seized the presidential palace on a strategic hilltop in this southern coastal city, security officials said.

The capture was a major blow to the Saudi-led coalition, which has been carrying out airstrikes for a week now across Yemen, including in the capital, Sanaa, in a campaign meant to halt the advance of the Iran-backed rebels known as Houthis.

The Maasheeq palace in Aden - a cluster of colonial-era villas perched atop a rocky hill that juts into the Arabian Sea - was President Abed Rabbo Mansour Hadi's last seat of power before he fled to Saudi Arabia last month in the face of the Houthi advance. He had earlier fled to Aden from rebel-held Sanaa.

Fighting was still underway late Thursday as Hadi's forces and loyalists were holding on to some scattered parts of Aden after losing the palace and the city center.

The capture of the palace came just hours after al Qaeda militants, who have profited from the turmoil and violence roiling Yemen to expand their foothold in this Arabian Peninsula nation, captured the coastal city of Mukalla, another key port, to the east of Aden.

In the raid, al Qaeda militants freed about 300 inmates from a local prison in Mukalla, including scores of militants, according to the security officials, who spoke on condition of anonymity because they were not authorized to talk to media.

Among the escapees was allegedly Khaled Saeed Batarfi, a Saudi of Yemeni origins who was AQAP's top commander in Abyan, a southern province in Yemen, and a former member of the militant group's governing Shura council. Batarfi was arrested in 2011.

"All the brothers have been liberated, including Sheikh Batarfi who is now amongst his brothers, all praise to Allah," AQAP Twitter accounts claimed.

The militants fanned out across major roads leading into Mukalla, the provincial capital of Hadramawt, and sporadic fighting continued in the city itself. The province is still mostly in the hands of government forces loyal to the embattled Hadi.

The Saudi-led air campaign has been targeting the Houthis and their allies, forces loyal to Hadi's predecessor, ousted President Ali Abdullah Saleh. Over the past two days, the airstrikes have focused on Aden, bombing rebels and Saleh loyalists approaching the city from the east and north.

The presumption was that if Aden was kept out of rebel hands, Hadi could return at some point to the country by way of the port.

Earlier Thursday, Houthi fighters broke through defense lines of Hadi's men in Aden to reach an area known as the "Crater" in the heart of the city and which is home to the palace.

Meanwhile, Saudi Arabia said one of its guards along the border with Yemen was killed Wednesday night. It was the first known Saudi casualty since the airstrikes started.

A border post in the Asir region came under heavy fire from a mountainous area inside Yemen, followed by cross-border skirmishes, according to the official Saudi Press Agency. Along with the Saudi guard who was killed, 10 other border guards were wounded, SPA said.