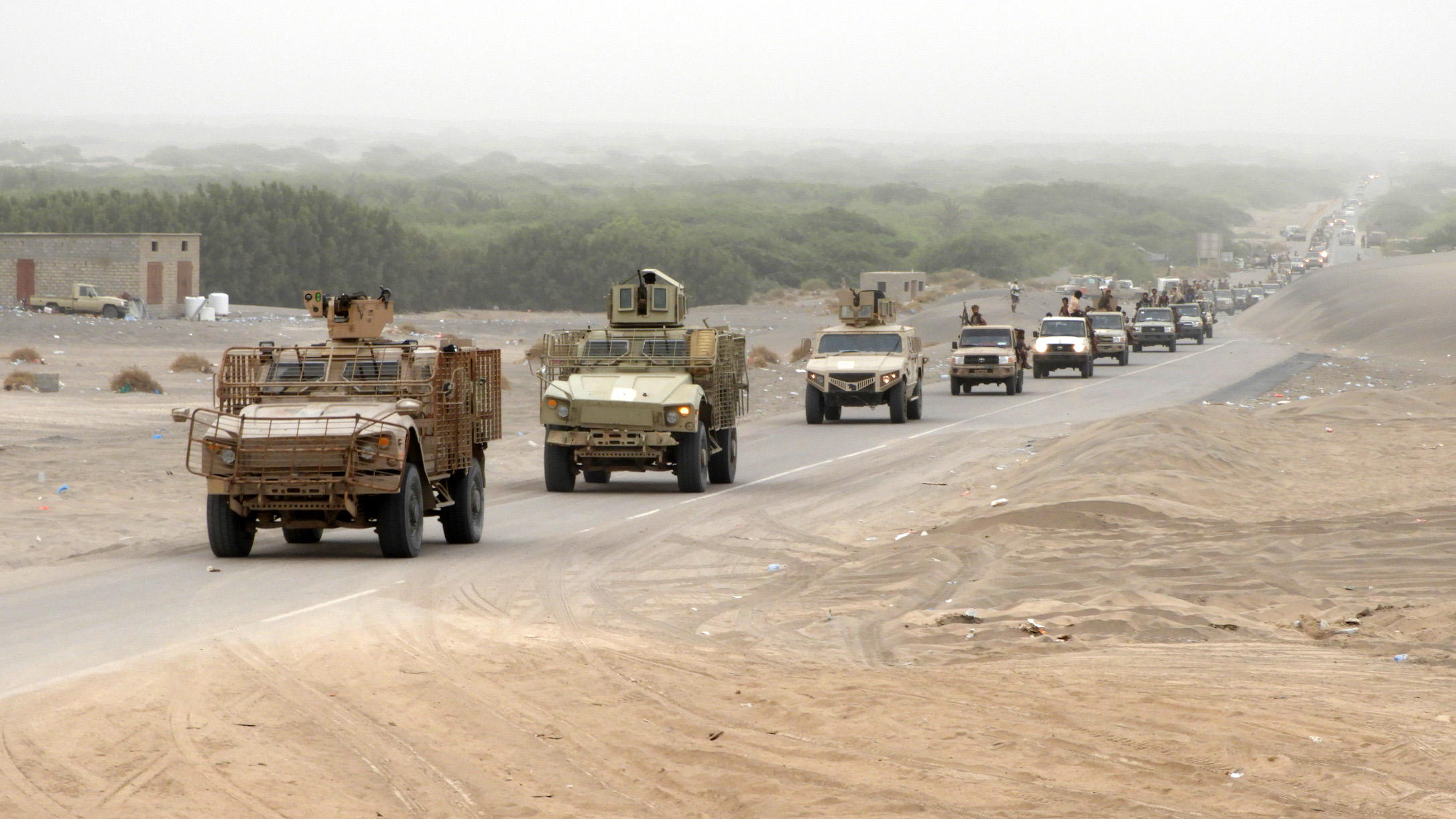 DUBAI, United Arab Emirates -- Troops in a Saudi-led coalition captured a town south of Yemen's port city of Hodeida on Thursday as fierce fighting and airstrikes pounded the area, officials said, on the second day of an offensive to capture the strategic harbor. The U.S. military, meanwhile, sought to distance itself from the offensive, led by key ally and U.S. arms buyer Saudi Arabia, after months of warnings that the battle for Hodeida could put hundreds of thousands of civilian lives at risk.

The Saudi-led coalition backing Yemen's exiled government launched an assault on the port city of Hodeida on Wednesday. The Red Sea port is the main entry for food into a country already on the brink of famine.

The biggest offensive of the years-long war in the Arab world's poorest nation has raised warnings from aid agencies that Yemen's humanitarian disaster could deepen.

The attack is aimed at driving out Iranian-aligned Shiite rebels known as Houthis, who have held Hodeida since 2015, and break the civil war's long stalemate. But it could set off a prolonged street-by-street battle that inflicts heavy casualties.

The fear is that a protracted fight could force a shutdown of Hodeida's port at a time when a halt in aid risks tipping millions into starvation. Some 70 percent of Yemen's food enters via the port, as well as the bulk of humanitarian aid and fuel supplies. Around two-thirds of the country's population of 27 million relies on aid and 8.4 million are already at risk of starving.

With that backdrop, the U.S. sought to make it clear on Wednesday evening that it was, "not directly supporting the coalition offensive" on Hodeida.

"The United States does not command, accompany, or participate in counter-Houthi operations or any hostilities other than those authorized against AQAP (al Qaeda in the Arabian Peninsula) and ISIS," Pentagon spokesman Maj. Adrian Rankine-Galloway told CBS News in a written statement sent Wednesday evening.

"U.S. military support to our partners is always geared towards mitigating noncombatant casualties," he said. "Our support to the (Saudi) Coalition consists of aerial refueling to Coalition aircraft and intelligence support to assist our partners in securing their borders from cross-border attacks from the Houthis."

While the U.S. is not playing a direct combat role in the Hodeida offensive, it comes about a year and a half after President Trump signed a multi-billion-dollar arms and economic deal with the Saudis in a move intended to strengthen the U.S.-Saudi Arabian alliance. If the deal is carried out in full and certain conditions are met, it could be worth almost $350 billion.

In 2016, Saudi Arabia imported $3 billion worth of U.S. arms, more than any other country.

Major U.S. defense contractors lauded the deal signed in 2017 as their stock prices rose in its wake.

Saudi coalition soldiers on Thursday took the town of Nakhila in Yemen's ad-Durayhimi district, some 12.5 miles south of Hodeida International Airport, according to the government-run SABA news agency. Fighters continued to move closer to the airport in fighting Thursday.

Early on Wednesday, convoys of vehicles headed toward the rebel-held city as heavy gunfire rang out. The assault, part of an operation dubbed "Golden Victory," began with coalition airstrikes and shelling by naval ships, according to Saudi-owned satellite news channels and state media.

Bombardment was heavy, with one aid official reporting 30 strikes in 30 minutes.

The initial battle plan appeared to involve a pincer movement. Some 2,000 troops who crossed the Red Sea from an Emirati naval base in the African nation of Eritrea were awaiting orders to move in from the west after Yemeni government forces seize Hodeida's port, Yemeni security officials said.

Emirati forces with Yemeni government troops moved in from the south near Hodeida's airport, while others sought to cut off Houthi supply lines to the east, the officials said. They spoke on condition of anonymity as they weren't authorized to brief journalists.

Yemen's exiled government "has exhausted all peaceful and political means to remove the Houthi militia from the port of Hodeida," it said in a statement. "Liberation of the port of Hodeida is a milestone in our struggle to regain Yemen from the militias."

Four Emirati soldiers were killed in Wednesday's assault, the United Arab Emirates' state-run news agency said, but gave no details of how they died.

Forces loyal to Yemen's exiled government and fighters led by Emirati troops had neared Hodeida in recent days. The port is some 90 miles southwest of Sanaa, Yemen's capital, which has been in Houthi hands since September 2014. The Saudi-led coalition entered the war in March 2015.

The United Nations and other aid groups already had pulled their international staff from Hodeida ahead of the assault. The U.N. Security Council was scheduled to meet Thursday to discuss the offensive.

The port has remained open, however. Several ships arrived in recent days, including oil tankers, and there was no word from the coalition or the U.N. to stop work, according to a senior port official, who spoke on condition of anonymity because he was not authorized to talk to the media.

More than 10,000 people have been killed in Yemen's civil war, which has displaced 2 million others and helped spawn a cholera epidemic. Saudi-led airstrikes have killed large numbers of civilians and damaged vital infrastructure.

The U.N. and Western nations say Iran has supplied the Houthis with weapons, from assault rifles to the ballistic missiles they have fired deep into Saudi Arabia, including at the capital, Riyadh.

The coalition has blocked most ports, letting supplies into Hodeida in coordination with the U.N. The air campaign and fighting have disrupted other supply lines, causing an economic crisis that makes food too expensive for many to afford.

Late Wednesday, the Saudi and Emirati governments announced what they called a "multi-faceted plan" to protect civilians in Hodeida, including establishing routes for food, medical supplies and oil shipments from Saudi Arabia's southern city of Jizan and the UAE's capital, Abu Dhabi.