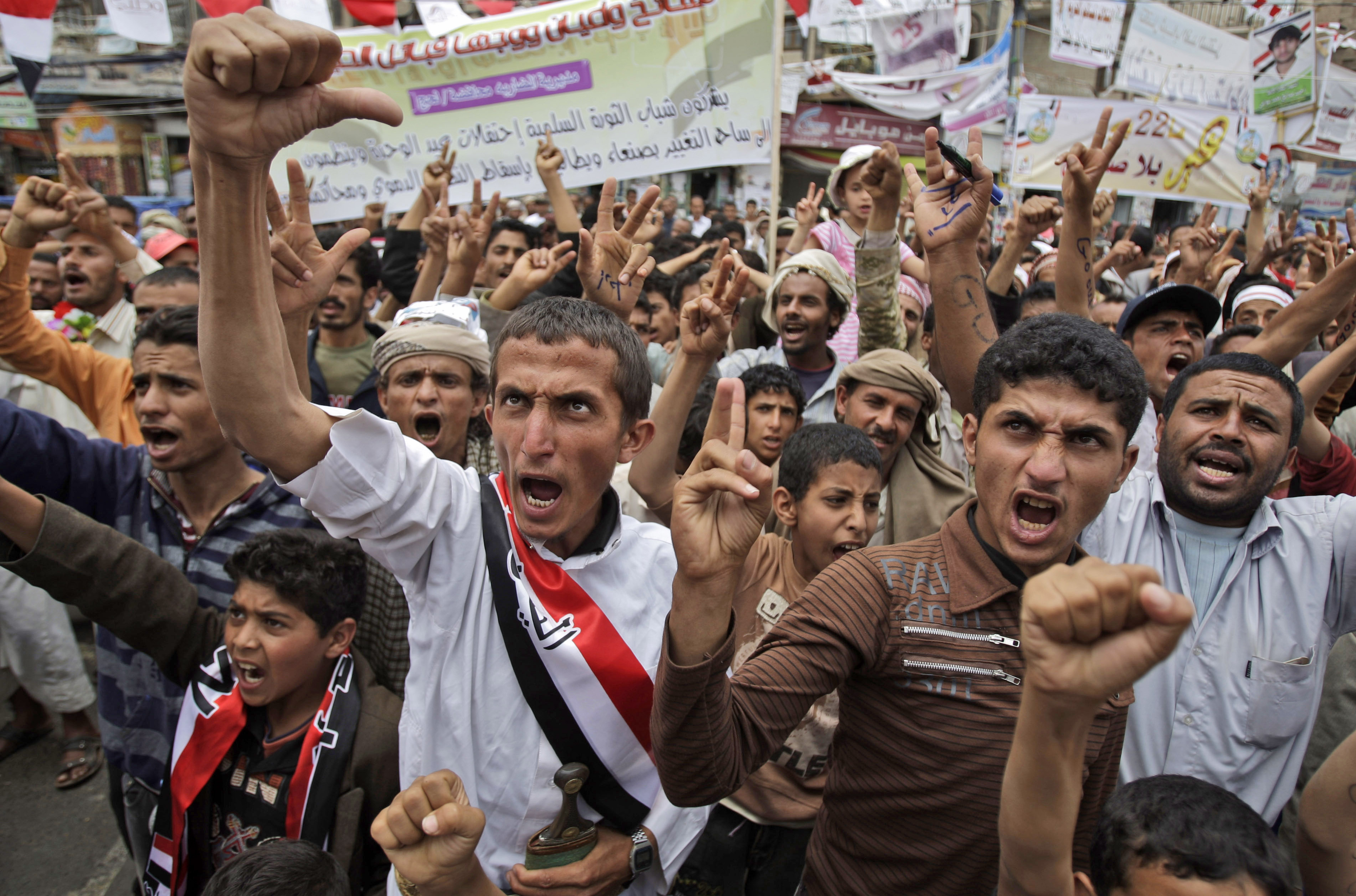 SANAA, Yemen - Security forces and opposition tribal fighters battled with automatic weapons, mortars and tanks in the Yemeni capital on Monday, blasting buildings and setting government offices on fire in an eruption of violence after President Ali Abdullah Saleh refused to sign an agreement calling on him to step down.

At least six people were killed and 25 wounded in the fighting, the fiercest yet between the pro- and anti-Saleh camps, which raised fears that the collapse of efforts to negotiate a peaceful resolution to Yemen's 3-month-old crisis could throw the country into a violent confrontation. Hundreds of thousands of Yemenis have been holding protests since February demanding Saleh's removal, and they have been hit by a bloody crackdown — but before Monday there had been only minor armed clashes between the two sides.

The violence erupted outside the Sanaa home of Sheik Sadeq al-Ahmar, leader of Yemen's largest and most powerful tribe, the Hashid. Saleh himself belongs the tribe, but al-Ahmar announced in March that the Hashid were joining the popular uprising against the president. Fighting raged for more than six hours, until the U.S. ambassador mediated a cease-fire, according to a ruling party official.

The spark of the fighting was unclear. Abdel-Qawi al-Qawsi, an aide to al-Ahmar, accused security forces of trying to storm the Hashid leader's residential compound and said tribal fighters counterattacked. Some witnesses said security forces had been setting up roadblocks between the walled compound and the nearby Interior Ministry, and that tribesmen saw it as a provocation.

The Hassaba district, where the al-Ahmar compound and a number of ministries are located, was turned into a battle zone, as tribesmen and security forces battled in the streets outside the Interior Ministry, trading fire with automatic weapons and rocket-propelled grenades. An office building of Yemeni Airlines was on fire, and smoke poured out of a building inside the Interior Ministry compound.

Tanks were seen pulling into the neighborhood and the sound of tank fire was heard. Hashid fighters outside Sanaa were rushing into the capital to reinforce their comrades, one tribal official said, speaking on condition of anonymity because of the sensitivity of the situation.

Some security forces took refuge in the nearby headquarters of the state news agency Saba, and tribal fighters who seized the Industry Ministry across the street opened fire on them with mortars and automatic weapons, said Hassan al-Warith, Saba's deputy editor-in-chief. The news agency's staff took refuge in the basement.

"We have been trapped here in the basement. The top floors have been destroyed," al-Warith said, pleading for the authorities to rescue them.

One journalist at Saba was injured by flying shrapnel and the crossfire made it impossible to take him to the hospital, said the head of the Journalists Syndicate, Marawan Damag. Three Hashid fighters were wounded in the battle, al-Ahmar's aide al-Qawsi said.

The gunfire ceased in the evening, but fighters and security forces remained in the district.

The violence erupted amid heightened tensions following Saleh's refusal to sign a U.S.-backed, Gulf Arab-mediated agreement under which he would step down in 30 days and hand over power to his vice president and a unity government in return for immunity from any future prosecution.

Sunday night, pro-government gunmen and soldiers locked down main streets around the capital with roadblocks, while tens of thousands of anti-Saleh demonstrators were massed at their protest camp in a central Sanaa square, worried that a new crackdown could ensue.

The situation in Yemen is particularly explosive because of the heavy weaponry on both sides. Saleh's regime has been bled dry by a wave of defections by party officials, tribes and — most importantly — major units from the national army.

Yemen's tribes are heavily armed, and their fighters virtually are militias loyal to the tribal leader. Al-Ahmar's residence, overlooking the main road to the airport in Sanaa, is sprawling, fortified compound, surrounded by walls and barricades on nearby streets. Often, armed tribesmen are seen on rooftops nearby keeping guard.

Saleh, meanwhile, has been able to cling to power by maintaining the loyalty of Yemen's best trained and equipped military and security units, which are headed by close family members.

Those security forces have occasionally unleashed bloody attacks on the crowds of protesters holding street demonstrations demanding Saleh's removal. The opposition says 150 protesters have been killed during the uprising. But the pro-opposition military units and tribal fighters have avoided fighting with Saleh's security forces, except for scattered minor clashes.

In a sign of the tensions, a protest activist said an anti-Saleh army unit siezed two supporters of the president who were allegedly storing weapons near Taghyeer, or Change, Square, the roundabout in the capital that has been the epicenter of the protest movement, with thousands camping there for weeks.

The activist, Radwan Massoud, said the two were caught by the army unit led by Maj. Gen. Ali Mohsen al-Ahmar, who was a Saleh confidant but later joined the uprising on March 21. The two were hiding weapons in a building near the square, apparently for use in attacking the protesters.

A coalition of Yemeni opposition parties said the protesters would remain peaceful and accused the regime of sparking Monday's fighting by trying to "storm" al-Ahmar's residence. In a statement, the coalition warned of "assaults that aim to drag the country into civil war."

Saleh, who has held power for 32 years, was supposed to sign the agreement for his resignation on Sunday. The opposition had signed it a day earlier.

But instead, Saleh's regime on Sunday unleashed a wave of his armed supporters into the streets of Sanaa in an orchestrated campaign to show support for him. Hundreds demonstrated outside foreign embassies and the presidential palace, chanting that they would not accept the president's ouster.

U.S. Secretary of State Hillary Rodham Clinton said she was "outraged" by the surrounding of the embassy. On Monday, the U.S. Embassy announced it was closing its consular section on Tuesday and Wedneday because of "the fluid security situation in the city" and barred its employees from entering the Hadda district of Sanaa, where the embassy standoff took place a day earlier "because of the "presence of armed militias."

Saleh said he would only sign the agreement if opposition leaders join him in a public signing ceremony, a demand rejected as an excuse by the opposition, which said the separate signings had been agreed on earlier.