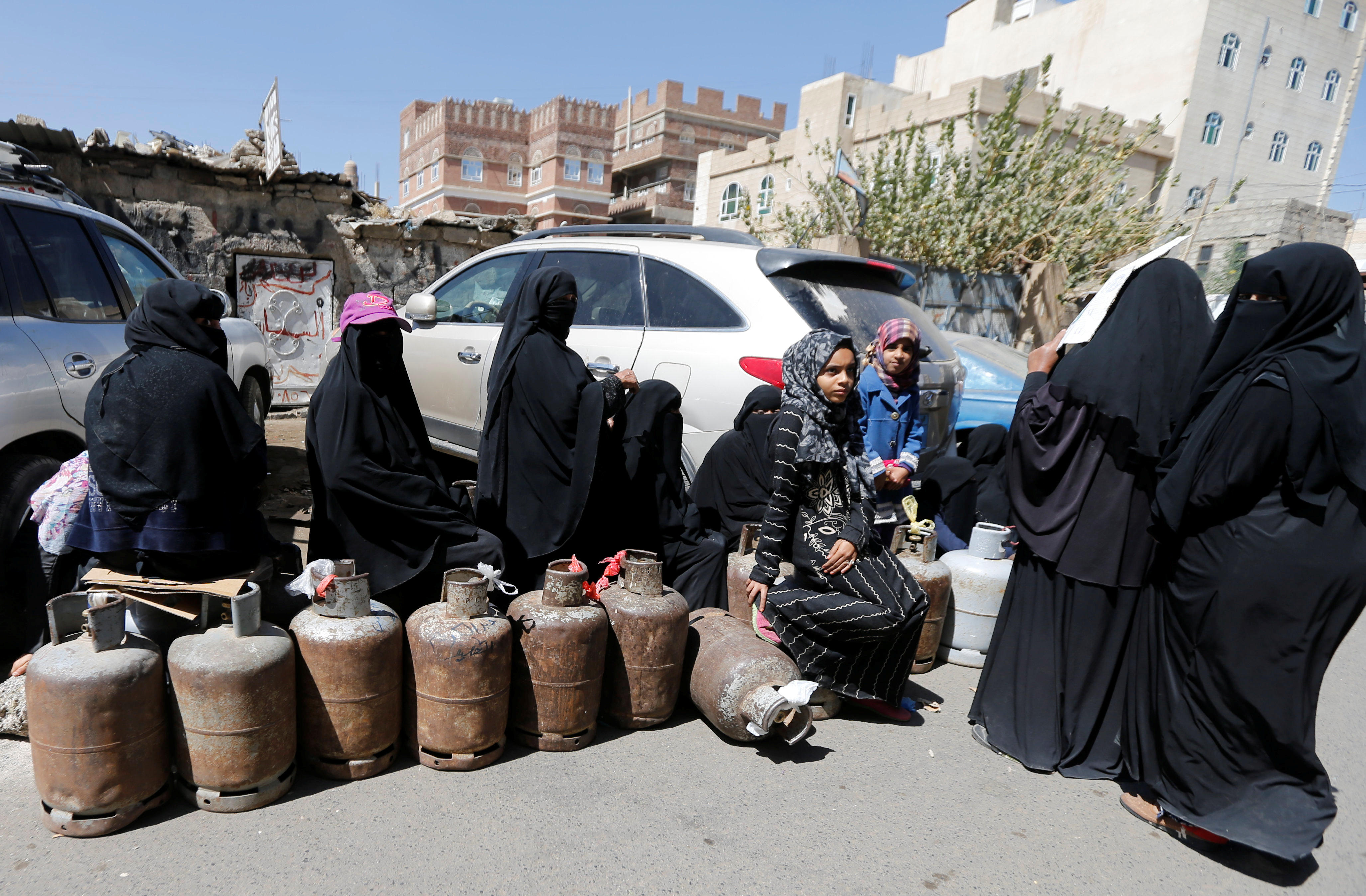 SANAA, Yemen -- Hundreds of cars lined the main roads of Yemen's capital after the rebels who control the city ordered fuel stations to close Wednesday, accusing merchants of taking advantage of a Saudi blockade to hike prices.

A Saudi-led military coalition tightened its blockade in Yemen this week after a ballistic missile fired by Houthi rebels was intercepted near the Saudi capital. Aid groups say the measures will exacerbate an already severe humanitarian crisis in the impoverished, war-torn country.

Fuel prices have spiked by 50 percent since Monday. Hassan al-Zaydi, a spokesman for the Houthi-run Oil Ministry, said merchants had refused orders to keep prices fixed, prompting authorities to shut the fuel stations down.

A U.N. official said aid agencies were given no prior notice of the Saudi decision to shut down all land, air and seaports in the country, and had learned about it from media.

"It will aggregate the already dire humanitarian situation," said George Khoury, the head of the U.N. Office for the Coordination of Humanitarian Affairs in Yemen.

"We want to be crystal clear to the international community. Any disruption will have catastrophic consequence on the lives of hundreds of thousands people and children," he said.

Later in the day, the U.N. humanitarian chief, Mark Lowcock, warned that if blockade continued, Yemen would face "the largest famine the world has seen for many decades, with millions of victims."

BBC News writes that the Red Cross said its shipment of chlorine tablets, vital to combating a cholera epidemic which has affected more than 900,000 people, had been blocked.

More than 8,670 people -- 60 percent of them civilians -- have been killed and 49,960 injured in air strikes and fighting on the ground since the coalition intervened in Yemen's civil war in March 2015, according to the U.N.

After briefing the U.N. Security Council behind closed doors, Lowcock called for a resumption of air flights into Yemen for the United Nations and its humanitarian partners, and he said there must be immediate access to all ports, especially for food, fuel, medicine and other essential supplies.

Every month, at least 7 million people depend on life-saving U.N. aid. Khoury said 10 U.N. ships in the Red Sea ports of Hodeida and nearby Salef have been ordered to depart.

A Saudi-led coalition has been at war with the Houthis, a Shiite group supported by Iran, since March 2015. Saudi Arabia blamed Saturday's missile strike on Iran, which supports the rebels but denies arming them.

The United States, which supports the coalition, echoed those allegations on Wednesday, saying Iran had supplied the rebels with advanced weapons, including ballistic missiles.

A White House statement condemned Iran's actions and voiced U.S. support to Saudi Arabia and other Gulf partners against Tehran's "blatant" violations of international law. The statement urged the United Nations to review evidence that Iran is perpetuating the war in Yemen to further its regional ambitions.

Saudi Arabia's crown prince has said that a ballistic missile fired at the kingdom on Saturday was a "direct military aggression by the Iranian regime." The White House statement did not refer specifically to the missile fired Saturday.

The coalition announced the closure of all ports in Yemen as of Monday. All humanitarian flights have been grounded, with trucks stuck at crossings and ships carrying basic necessities like fuel, wheat and other food being ordered to leave.

The Houthis control northern Yemen, including the capital. The internationally recognized government is based in Saudi Arabia, and its control over southern Yemen, which is also home to separatist groups and Islamic extremists, is limited.

The office of President Abed Rabbo Mansour Hadi, the head of the internationally recognized government, on Wednesday denied reports that Saudi Arabia has prevented him from returning to Yemen, calling them "lies."

Officials, including a top military commander close to Hadi, told The Associated Press that Saudi Arabia has prevented Hadi, his sons, officials and ministers from returning to Yemen. The ban was prompted by the bitter enmity between Hadi and the United Arab Emirates, a key coalition member, they said, speaking on condition of anonymity because of the sensitivity of the subject.

The presidency's statement, quoting an unnamed official, said the reports are a "systematic campaign targeting Saudi Arabia which leads a battle to stop the Iranian interference in Yemen and the region." The Saudis and the UAE are the main pillars of the coalition.