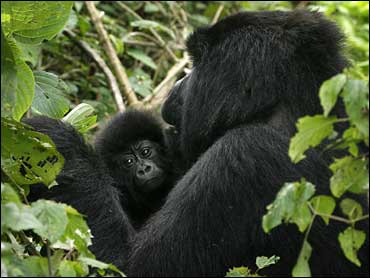 The "Year of the Gorilla" began Monday - a U.N. effort to raise money for primates threatened with extinction from disease, hunting and deforestation.

Officials for the U.N.-backed Convention on the Conservation of Migratory Species of Wild Animals said they hoped to raise half a million euros ($630,000) for projects aimed at fighting the animals' biggest threats.

"We need to use the resources that we raise to promote more gorilla-watching tourism, to get more equipment and infrastructure to help rangers combat poaching," Robert Hepworth, an official with the Convention, said. "We need to do more to conserve their habitat."

The "Year of the Gorilla" was launched at a ceremony in Rome where Prince Albert II of Monaco and representatives from more than 100 governments gathered this week to discuss increasing measures for nearly 30 species endangered by pollution, climate change and overhunting.

Gorillas are threatened by diseases including Ebola, deforestation and armed conflicts. They are also hunted for meat and their infants are captured for pets.

A report released in August by the International Union for Conservation of Nature and other groups warned that nearly half of the world's 634 species and subspecies of primates are threatened with extinction from human activity.

The figures were particularly grim in Asia, where more than 70 percent of primates were on the group's "Red List" of vulnerable or endangered species.