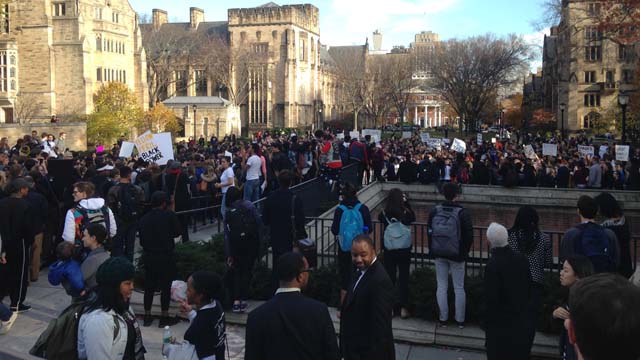 NEW HAVEN, Conn. -- Hundreds of Yale students and supporters marched across campus Monday to protest what they see as racial insensitivity at the Ivy League school.

The "March of Resilience" followed several racially charged incidents at Yale, including allegations that a fraternity turned a woman away from a party because she was not white.

The allegation is that a fraternity brother at Sigma Alpha Epsilon said they were looking for "white girls only." However, that fraternity denies the brother said that.

Students held signs, including one that read, "Don't Look Away." They chanted, "We out here. We've been here. We ain't leaving. We are loved," as they marched from the Afro-American Cultural Center across campus and past the Sigma Alpha Epsilon house.

The marchers also were upset over an email from a faculty member who objected to a request from the Intercultural Affairs Committee that students avoid wearing racially insensitive Halloween costumes, such as Native American headgear, turbans or blackface.

Erika Christakis, who is also an administrator at a residence hall, wrote that students should be able to wear any costume they want.

"Is there no room anymore for a child or young person to be a little bit obnoxious . a little bit inappropriate or provocative or, yes, offensive?" she wrote to students at the residence hall. "American universities were once a safe space not only for maturation but also for a certain regressive, or even transgressive, experience; increasingly, it seems, they have become places of censure and prohibition."

CBS affiliate WFSB spoke to some students who are upset.

"A lot of people here on campus, especially people of color, women of color, feel they're discriminated against or sometimes their voices are not heard," said Abby Johnson, a Yale senior.

"We would like to see an improved climate on campus. Specifically improving diversity in the faculty, uplifting ethnic studies and also have sensitivity training for all Yale students and faculty," said student Katie McCleary.

On Friday, he sent a campuswide email saying he was deeply troubled by the atmosphere on campus. He called on the community to come together to create greater "inclusion, healing, mutual respect and understanding" at Yale.

The school also has been dealing with issues such as a residential hall named after John Calhoun, a prominent slave-owning politician, and questions about how minorities are treated on campus.

The march was held hours after the president of the University of Missouri president stepped down amid a controversy over race relations at that school.