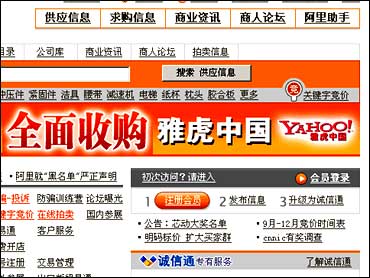 Yahoo Inc. announced Thursday it would pay $1 billion in cash to acquire a 40 percent stake in the Chinese e-commerce firm Alibaba.com.

As part of the deal, Yahoo has also agreed to contribute its China business to Alibaba, according to a joint statement from the two companies. The combined entity will also include 3721.com, a Chinese language search engine that Yahoo acquired last year, it said.

According to the Chinese government, the number of people online in the country has reached 103 million - the second-biggest population of Web users after the United States.

Chinese online commerce is in its infancy, however, and consumer spending is still low in a society where urban incomes average just $1,000 a year.

Yahoo will have 35 percent of voting rights in Alibaba as a result of the investment, said the statement, which was distributed at a press conference in Beijing.

The agreement makes Yahoo the largest strategic investor in Alibaba, and is the biggest deal yet in a flurry of investments in China by foreign Internet companies eager for a share of a market with more than 100 million people online.

The alliance between Yahoo and Alibaba represents a challenge to U.S.-based eBay, the world's biggest online commerce company, which in 2003 bought a Chinese portal, eachnet.com.

"We believe the combination of Yahoo and Alibaba is the best approach for Yahoo to win in this region," Terry Semel, chairman and chief executive officer of Yahoo, was quoted as saying in the statement.

The deal is expected to be completed in the fourth quarter of 2005, it said.

Alibaba was founded in 1999 by Jack Ma, who has become one of China's most promiment Internet entrepreneurs. The company is based in the eastern Chinese city of Hangzhou, southwest of Shanghai.

News of the deal comes just days after an initial stock offering in the United States by another Chinese online firm, search engine Baidu.com, set off a frenzy of buying. Its shares soared more than 350 percent in their first day of trading Friday before declining slightly this week.