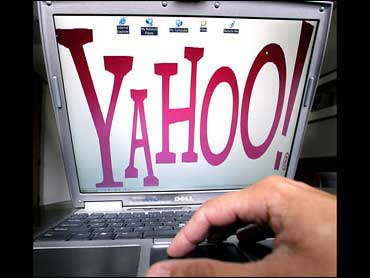 Yahoo Inc. will introduce new features Monday for its popular Web-based e-mail program, including software that allows computer users to type text messages on a keyboard and send them directly to someone's cell phone.

The enhancements make it easier to send e-mail, instant messages or text messages from a single Web site - no need to launch or toggle between separate applications or devices. The features will be available to users in the United States, Canada, India and the Philippines.

The most obvious beneficiaries will be parents, who will be able to use their keyboards to type messages sent to their children's cell phones - no thumb-twisting typing on a dial pad, said Yahoo Vice President John Kremer.

"We're giving you the right way to connect at the right time with right person," said Kremer, whose two preteen sons vastly prefer text and instant messages to e-mail.

The changes come amid fierce competition among providers of free, Web-based e-mail services. Yahoo and Microsoft Corp.'s Hotmail have long dominated the niche, but Google Inc.'s Gmail has grown quickly since its introduction in April 2004.

Sunnyvale, Calif.-based Yahoo bills the changes as the most significant overhaul of Yahoo Mail since its launch in 1997. The new version replaces a one-year-old beta program and adds new features, including text messaging, a more comprehensive e-mail search engine and an easier to read and edit contacts database.

Users who don't want the upgrades - or whose computers are too slow to handle them - can opt to remain with the current version, which Yahoo will call "Classic."

"This gives people the ability to reach anybody in their contact database anytime," said Mike McGuire, vice president of research at industry analysis firm Gartner Inc. "For good or evil, it's going to be much easier for anybody to get hold of you."