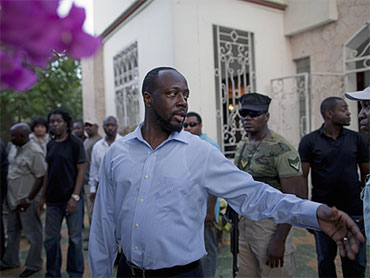 Wyclef Jean will find out for certain whether he's eligible to run for Haiti's presidency.

The country's provisional electoral council is set to release its official list of candidates Friday. Despite reports that he's been ruled ineligible by the panel, the former Fugees frontman has remained upbeat that he'll be allowed to run.

The central obstacle to Jean's candidacy is Haiti's 5-year residency requirement to seek office. A member of the provisional electoral council told Reuters Thursday that Jean was "not on the list as I speak."

Jean moved to Brooklyn, NY, from the impoverished nation when he was 9, but has remained an active figure in Haiti through his charity work. In 2007, he was appointed as a roving ambassador for the country, which Jean says exempts him from the residency requirement.

Jean met with Haitian President Rene Preval for more than two hours Thursday and voiced confidence that the council would rule in his favor.

"It looks like it's leaning that way," he said.

Jean told the Associated Press that his exchange with Preval was positive.

"I feel good," the hip hop artist and former Fugees frontman said. "I feel that the president that I voted for five years ago is the same person that was sitting in front of me today."

Several hours after the meeting, Jean posted a photo on his Twitter account of him shaking hands with Preval, who is not allowed to run for re-election.

Earlier in the week, Jean said he had received death threats. Jean said Preval expressed concern and offered him security.

Haitians are watching the election closely; whoever is elected will preside over reconstruction of the earthquake battered, impoverished country.

A spokesman for the electoral council, Richardson Dumel, said Thursday evening that the list of candidates "is not yet final" and added that he cannot disclose who has made the cut.

Late Thursday night, about 500 Wyclef supporters gathered at the entrance to the council, which is housed in what was once a Gold's Gym.

"We are here to make sure that the CEP gives out a fair result and for Wyclef to participate in the election," said protester Jean Renel.

Jean added that Preval told him he wanted to "meet with every possible presidential candidate," and called for a peaceful campaign ahead of the vote.

A call to Preval's press office was not returned.