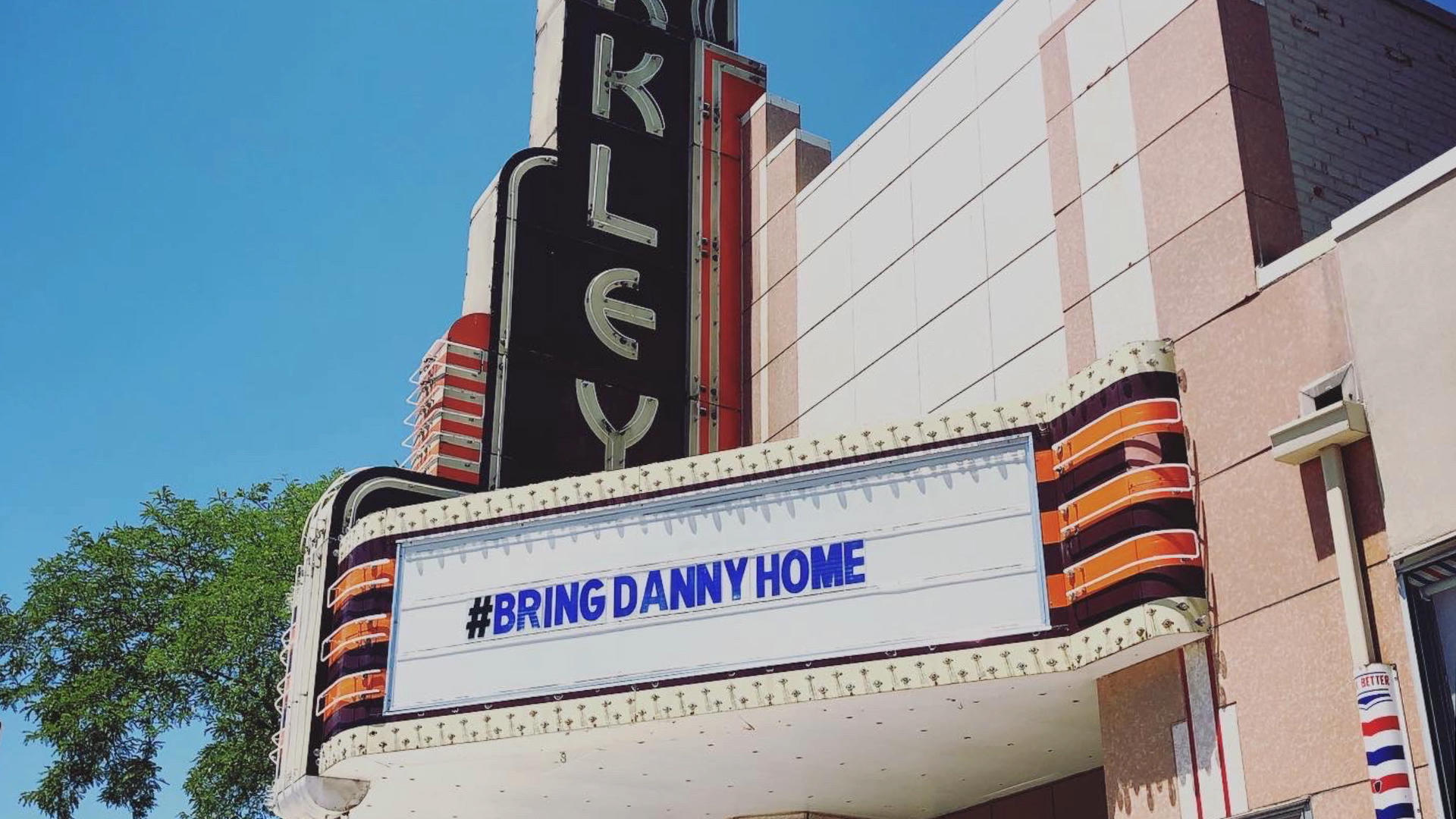 When most of us hear the word "hostage," we think of someone held captive by a terrorist group, or criminal gang seeking ransom, attention, or worse. But the vast majority of Americans imprisoned abroad today are held not by terrorist groups, but by foreign governments with whom the U.S. has thorny, or in some cases, no relations.

Our government calls them "wrongful detainees," and there are currently more than 40 of them. This fall saw a rare moment of success -- the release of a 37-year-old journalist named Danny Fenster, a Detroit native who'd been locked away for nearly six months in a small, always-lit cell in a prison in Myanmar, formerly called Burma.

Danny Fenster's reunion with his family in November is the moment every hostage and detainee family dreams of.

Fenster had moved to Myanmar in 2019 and worked as an editor for several publications. He and his wife, a Brazilian diplomat named Juliana, watched in dismay as, a year ago this month, a military junta ousted the elected government of Aung San Suu Kyi, which brought throngs of peaceful protestors into the streets.  Within weeks, though, the military regime ordered a violent crackdown that drew worldwide condemnation.  Late last spring, Danny had a flight home to visit his parents, but as he was about to board the plane, a group of policemen showed up and called out his name.

Danny Fenster: And I just looked up, like, "What?" And I said, "Yeah, that's me." They said, "We-- have questions for a criminal investigation."

Lesley Stahl: Did they allow you to make any phone calls? No--

Danny Fenster: No. I got a couple text messages off to Juliana saying, "Call the American embassy. I'm being detained."

Lesley Stahl: Were you handcuffed?

Bryan Fenster: I had a very long text message from his wife, Juliana.

Bryan Fenster, Danny's older brother back home in Detroit, was the first in the family to learn that Danny was in prison, and the family immediately  mobilized.

They launched a "Bring Danny Home" campaign, including supporters worldwide sketching his picture.

Danny was eventually charged with incitement and wrongful association based on his work for a banned publication that had been critical of the military, even though he hadn't worked there for 10 months. He says he desperately wanted to let his family know he wasn't being tortured, but for weeks he wasn't allowed any communication at all outside the prison.

Danny Fenster: I remember just staring at the wall, thinking sort of figuratively, you know, "I just-- when is that tank gonna bust through the wall, you know, and get me outta here?"

Lesley Stahl: You really thought at one point you were gonna be rescued?

Danny Fenster: No. But I was really hoping.

The State Department made repeated appeals, but the U.S. government hasn't recognized the legitimacy of the junta, so even getting information about Danny was difficult. After a month, he was finally allowed periodic phone calls with his family.

Bryan Fenster: It was hard. I mean, there were many calls we had with him where he was in tears. You're trying to find the words for him, you know, after one month, two months, three months, four months.

Back in Washington, Danny's case had fallen under the mandate of Roger Carstens, one of the few State Department officials held over from the Trump  administration. He's a man with a tough job and an odd-sounding title.

Lesley Stahl: You're called SPEHA. What does that mean, SPEHA?

Roger Carstens: It's Special Presidential Envoy for Hostage Affairs. So everyone truncates it into SPEHA.

The SPEHA office was created in 2015, after an internal review of U.S. hostage policy following the tragic deaths of American journalists and aid workers held captive by ISIS and complaints from hostage families that the government hadn't been proactive enough. But in the years since, the makeup of Roger Carsten's cases has changed.

Lesley Stahl: I'm kinda surprised that there are many more-- many more hostages being held by governments than by terrorists.

Roger Carstens: I know. That is surprising, isn't it? The-- the majority of our cases are actually what we call wrongful detentions. It's when a nation-state actually is detaining American c-- essentially unjustly.

Lesley Stahl: That government wants something in return for our citizen.

Jason Rezaian: It's something that people don't know about, they don't-- think about very much.

Washington Post reporter and Iranian American Jason Rezaian was a wrongful detainee himself -- imprisoned for a year and a half in Iran, where he'd been living as the paper's bureau chief. He was freed as part of a prisoner swap in 2016 and has been pushing ever since for the U.S. government to prioritize the cases of the more than 40 current wrongful detainees.

Lesley Stahl: What countries around the world are holding Americans right now?

Jason Rezaian: Iran, which is sort of the perennial hostage-taker; China, who has more than anybody else; Russia; Venezuela.

Lesley Stahl: Does our government have a stern policy against quid pro quos?

Roger Carstens: That's a hard question to answer, and here's why. There are things that, to give in, would actually either provide an incentive or a benefit to the hostage taker, and so my job is to start becoming creative. What else can we possibly do to solve this problem without giving a direct concession?

Lesley Stahl: Prisoner swaps. Taking the innocent American and swapping him for a guilty criminal, we've done that.

Roger Carstens: If there's a way I can get someone out that doesn't involve a swap, much better.

But in Danny Fenster's case, the Myanmar government wasn't asking for any policy concessions or prisoner swaps.

Bill Richardson: It didn't look like he was gonna get out.

He had a long history with Myanmar, and was concerned about a local former employee of his foundation who had also been arrested. He secured an invitation from the military regime to come to discuss humanitarian assistance and covid vaccines, and told the state department he wanted to work on the Fenster case too, but he got pushback.

Bill Richardson: They asked me not to raise Danny Fenster.

Lesley Stahl: Did you say, "Why shouldn't I raise this?"

Lesley Stahl: There was some tension between Governor Richardson and the State Department.

Roger Carstens: The bottom line is that I had discussions on a few occasions where I said, "We have a current line of effort. I'm feeling pretty good about this. Can we hold off a little bit?"

Richardson held off briefly, but then flew to Myanmar this past November and participated in two days of humanitarian aid meetings at the presidential palace with the isolated military regime, including the commander in chief, a man considered responsible at the time for more than 1,200 civilian deaths. It was a PR coup for the junta, which splashed photos of the meeting far and wide.

Bill Richardson: When I think we convinced them of our sincerity, then I said, "By the way, you've got-- I want two things. You have an activist Burmese woman that worked for me. I want you to release her." The next day, She'd been released.

Bill Richardson: Just like that. Then I decided, I'm on a roll. "By the way, there's an American journalist named Danny Fenster. And you should release him. It'd be the right thing. The American people are gonna like this. Your record with the U.S. government right now is not very good. So it-- it'd make you look good. Humanitarian gesture."

Lesley Stahl: But you were defying the State Department.

Bill Richardson: I wasn't defying. I just saw an opportunity and I took it.

Richardson says the commander privately told him he'd release Fenster, but not yet. So, he left Myanmar empty-handed, slammed for having given a pariah regime legitimacy, and looking like he might have made things worse for Danny Fenster, who was sentenced a week later.

Danny Fenster: "You've been convicted on every count and sentenced to 11 years."

Danny Fenster: Yeah. It was, like-- despair, you know?

Lesley Stahl: There was criticism. The feeling that you had botched this meeting and it led to Danny Fenster h-- getting this 11-year sentence.

Bill Richardson: You know, families get so emotional. They go through ups and downs. But I knew if the commander kept his word, and I thought he would, that this would be forgotten.

Bill Richardson: And I got him out. He's out. And we did it.

Sure enough, just days after the sentencing, Richardson was quietly summoned back to Myanmar, and Danny was unexpectedly taken out of his cell, put in a van, and without knowing where he was going, driven to the airport.

Danny Fenster: I just see a bunch of White guys in suits. I didn't know who was who.

Bill Richardson: And there was Danny-- walking towards me.

Danny Fenster: And he said, "I'm here to take you home." I just couldn't stop smiling. I was smiling so much. I was so happy. The sun was on my face, I could feel the sun. Yeah, it was amazing.

Roger Carstens at press conference: I'd like to start with saying thank you to Governor Richardson for securing the release of Danny Fenster.

If there was any lingering anger over Governor Richardson's trip, it was not on display at the press conference when Danny landed on U.S. soil.

Roger Carstens: I just can't get upset when the governor actually brings him home. We have no pride of authorship. Whoever can come up with a plan and get someone out, we're down for the win.

Carstens says he's hopeful about some of the other detainee cases. Recently he traveled to Venezuela to meet 9 Americans imprisoned there. And in ongoing negotiations to revive the Iran nuclear deal, the U.S. envoy has said it would be "very hard for us to imagine getting back into the nuclear deal while four innocent Americans are being held hostage." Yet, Jason Rezaian says it's still not enough.

Lesley Stahl: When you say we should prioritize getting these people out–

Lesley Stahl: --the implication is that you're saying let's make a deal; let's do a swap. And then you're right back to the issue of incentivizing this thing.

Lesley Stahl: So, you're saying make the deal here and then punish them later–

Jason Rezaian: Bring them home however you need to do it–-

Jason Rezaian: You know what, cut through all the BS and just bring people home.

Lesley Stahl: Critics say that even though you work very hard, you keep the families apprised of what's going on that you're not doing a good job.  There are still 40 people being held.

Roger Carstens: When I go to bed every night, I feel the weight of not having brought home between 40 and 50 Americans, so I don't go to bed usually feeling good.  I usually wake up with energy, can't wait to get to the office and get back after it. But this is a business of ones and zeroes in computer language. Someone comes home, steps on a tarmac in America, falls into the arms of their loved ones. You've got a victory there. But unless that's happening, you're losing.

We want to leave you…

…with a pretty special falling into the arms of a loved one.

Danny's reunion with his 95-year-old grandmother, a survivor of the Holocaust.

Grandma: I'm happy you're in America. God bless you.