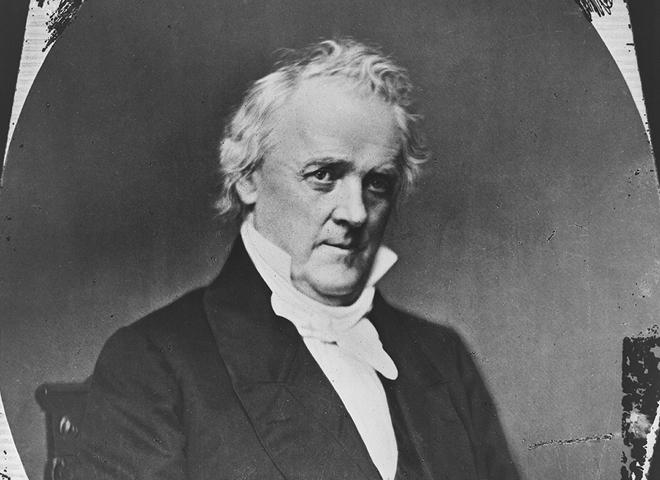 Who among our presidents deserves the dubious distinction of being called WORST EVER? Mo Rocca tells us that, of all the possibilities there’s one who stands out:

James Buchanan was at Wheatland, his Lancaster, Pa., estate, when he was notified he’d been elected president in 1856.

It’s a gorgeous home, with one very special amenity, which Wheatland’s director, Patrick Clarke, showed Rocca: an outhouse for five.

“This is pretty unique,” said Clarke. “It has two adult seats, one for maybe a teenager, two for little kids. … This is the family that ‘goes’ together!”

“You could have a whole cabinet meeting in there!” said Rocca.

But ask historians where they rank our 15th president and, well, he’s in the proverbial toilet.

Which is also the title of Strauss’ book.

Buchanan had his detractors, like President Andrew Jackson, but not everyone hated him. After all, he was elected president in 1856. But this Northern Democrat’s sympathies with the slave-holding South exacerbated long-simmering tensions.

Under Buchanan, the country split apart, a crisis bequeathed to his successor, Abraham Lincoln.

Yet at Wheatland, they’re not quite so hard on the guy. When asked where he would rank Buchanan among the 43 men who have occupied the Oval Office, Patrick Clarke replied, “Probably 42nd.”

If Buchanan is remembered at all, it’s for being the “Bachelor President” -- the only president never to marry.

Rocca asked Strauss, “Let’s just get this out of the way right now: What was the deal with James Buchanan?”

“He did have a bad relationship early on,” Strauss replied. “His fiancé probably committed suicide based on --”

“Because he was gay?”

But there’s plenty of evidence that he knew how to throw a great party.

“He threw the best party of the middle part of the nineteenth century, the Inaugural Ball,” Strauss said. “Six thousand people show up!”

All of which raised high hopes at the beginning of his administration.

But, Strauss noted, “They were dashed pretty quickly.”

Only two days after his inauguration, the Supreme Court handed down the infamous Dred Scott decision, allowing that escaped slaves be forcibly returned to their owners.

Buchanan backed this decision. Slavery would be the country’s -- and his -- undoing.

“He feared that if you handled the issue of slavery too robustly, that it would create what he believed would be the end of the union, secession,” said Clarke.

And that’s exactly what happened. After Lincoln’s election but before his inauguration, seven states seceded while a politically-paralyzed Buchanan presided.

What was his reaction, once states started seceding?

“So his biggest reaction is a personal one, like, ‘Guys, I thought we were all friends’?” Rocca asked.

The ensuing civil war would become known as “Buchanan’s war.”

So what did Buchanan get right? “Not much, to tell you the truth,” according to Strauss.

Upon leaving Washington, Buchanan is said have told incoming President Abraham Lincoln, “Sir, if you are as happy in entering the White House as I shall feel on returning to Wheatland, you are a happy man indeed.”

“He said to friends and family alike, ‘I could well be the last president of these United States,’” said Betty Nauman, who has been giving tours of Wheatland for close to 30 years.

Still, at 91 Nauman doesn’t plan on abandoning Buchanan, or his home, any time soon.

“I think this house keeps me young,” she told Rocca.

Well James Buchanan did something right!

Leader of the band
Thanks for reading CBS NEWS.
Create your free account or log in
for more features.
View CBS News In
CBS News App Open
Chrome Safari Continue
Be the first to know
Get browser notifications for breaking news, live events, and exclusive reporting.