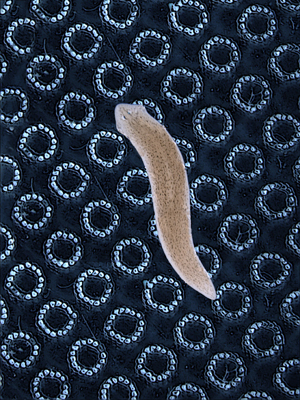 Apparently losing your head doesn't have to mean losing your mind. At least, not if you're a worm.

In the July issue of The Journal of Experimental Biology, researchers from Tufts University studied memory regeneration in a small, yellow flatworm known as a planarian. The results show that when a planarian's head is decapitated, it can grow it back -- along with the memories inside -- within two weeks.

"I suspect what we are seeing here is an example of the information storage and processing capabilities of all cells and tissues," researcher Michael Levin told CBSNews.com. The study was led by Tal Shomrat, a post-doctoral student in Levin's lab.

Once the head and brain regenerated, researchers found it only takes one brush-up lesson to help the worm relearn its previous skills. After decapitation, the worms that had been trained were able to overcome the fears faster than the ones that had not been trained. They needed a lesson, but the memories came back once stimulated.

While this could suggest that the planaria's memories are stored elsewhere than the brain, it is also possible that the original brain alters the nervous system, which in turn alters the regenerated brain. Understanding the exact mechanisms will require further research.

"The implications are that learned information can be stored in tissues outside the brain, and that this information can be imprinted upon newly regenerating brains. We do not know how much of this extends to humans, although these worms are not primitive creatures -- they have a true centralized brain and many similarities to the human body-plan and genome," Levin said.

Down the road, he added, this research could help with treatments for degenerative disease.

"When an adult brain with 60 years of memories has a substantial portion replaced with new stem cell progeny, what happens to the memories and personality of that individual? No one knows yet; we must begin to find out, using model systems like these planaria," he said.