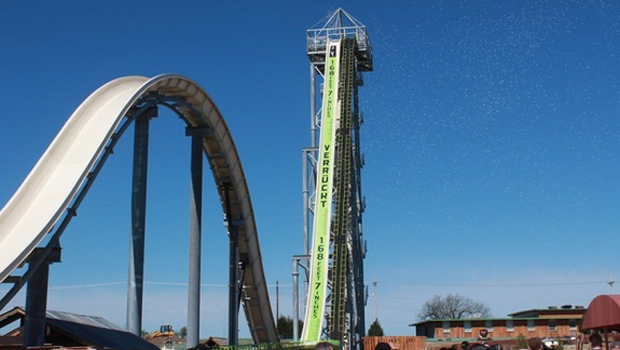 The slide stands 168 feet 7 inches (about 51 meters) tall, and is now officially recognized by Guinness World Records as the tallest waterslide in the world. After the first 17-story drop at a 60-degree angle, riders swoop up a hill, before plunging down a 60-foot drop and landing safely in a splash pool. A rider's raft reaches speeds of about 65 mph, and the entire harrowing ride lasts all of 10 seconds.

The ride was originally scheduled to open on Memorial Day, but the rafts kept flying off the chute during test runs. So what does it take to keep a raft from picking up too much speed and separating from the chute? [6 Weird Facts About Gravity]

It's all about the relationship among gravity, friction and the steepness of the slide, said Gene Van Buren, a physicist at Brookhaven National Laboratory in New York. After climbing the 264 steps to the top, riders are strapped onto a rubber raft, and their position at this height means they are full of stored, unused energy called potential energy.

Once the raft is tipped over the edge, gravity takes over. It converts potential energy into kinetic energy, and makes the raft accelerate. The steepness and length of the slide are critical to keep that acceleration in check, Van Buren said.

How steep can a slide be?

If a person is sliding along a nearly level slide, moving parallel to the ground, gravity would be pushing them down with the same force at which the slide is pushing them back up. So, rather than accelerating, the person's movement would eventually slow to a stop.

But if the slide has a slope, then the force from the slide is at an angle instead of completely opposite the force of gravity. This makes the person speed up as he or she slides down.

The longer and taller a slide is, the steeper the lower half can be for it to still be safe for riders Van Buren said. However, gravity does determine how quickly the slide's steepness can change.

"If it becomes too steep too quickly, then a person or object of any sort would no longer remain on the slide, and would likely become airborne," Van Buren said.

On the Verrückt, riders are said to experience a feeling of weightlessness. It's the water running down the slide, creating an almost frictionless surface, that makes this possible, Van Buren said.

Weightlessness is achieved when a person can no longer feel any downward force from their own weight. Verrücktriders feel weightless for a few seconds, when the raft is barely hovering above the slide.

Riders would feel out of control if the raft were to separate from the slide, and become airborne. Instead, a safer feeling of weightlessness happens on Verrückt, with the raft hovering a fraction of an inch above the water.

"Free fall can be a rather scary feeling, and people can get a thrill from that," Van Buren said. "So this is undoubtedly why slide designers push to make the safety margins as small as they can, and get people closer to the verge of becoming airborne, without ever doing so."

Daredevils can now ride the slide at Schlitterbahn Waterparks and Resorts in Kansas City, Kansas.