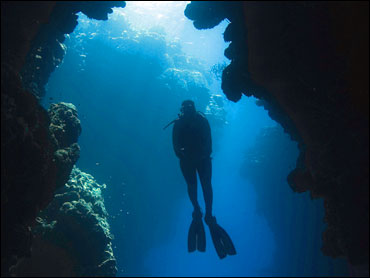 A pair of foreign cave divers in Mexico's Yucatan peninsula said on Monday they have found subterranean passages that constitute the world's longest underwater cave system.

For thousands of years, the Mayan Indians depended on water found in the caves and in lakes formed by sinkholes — areas where the caves' ceilings collapsed, opening them to the surface.

The lakes dot the Yucatan peninsula, now one of the world's fastest-growing sites for tourism and resort developments.

Bogaerts says his dives proved a connection between the Nohoch Nah Chich caves and the Sac Actun system, which together measure 95 miles in length. That connection shows that many of those seemingly isolated watering holes are part of a single larger system, he said.

The longest previously known submerged cave system is the 91-mile Ox Bel Ha system, in the same general area, according to documents posted by the Speleological Society on its Web site.

"That's the important thing for people to understand. ... The point is that they're so interconnected," Bogaerts said. "There are so many cave systems that if there's a point of pollution in any one particular area it can spread very extensively throughout the entire system."

Bogaerts and Schmittner spent four years swimming the length of the system, making about 500 dives with scuba tanks, linking one sinkhole lake to the next. Some passages were "big enough for a jumbo jet," while others were so narrow divers had to remove their tanks to wiggle through.

The breakthrough discovery — the passage connecting Nohoch Nah Chich ("The Giant Birdcage" in Maya) and Sac Actun ("White Cave") — was made by the two divers on Jan. 23.

Jonathan Martin, an assistant professor of geology at the University of Florida, said the discovery — which has not yet been published in scientific journals — appeared feasible, based on the geological formations of the Yucatan.