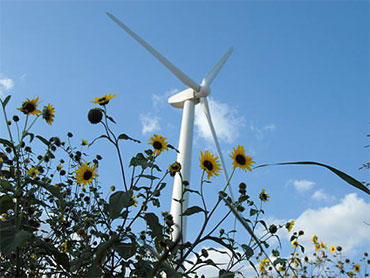 The world's largest wind farm officially got up and running Thursday, with all 627 towering wind turbines churning out electricity across 100,000 acres of West Texas farmland.

The Roscoe Wind Complex, which began construction in 2007 and sprawls across four counties near Roscoe, is generating its full capacity of 781.5 megawatts, enough to power 230,000 homes, the German company E.ON Climate and Renewables North America said.

"This is truly sign milestone for us," said Patrick Woodson, the company's chief development officer. "In three years to be able to take this project from cotton fields to the biggest wind farm in the world is something we're very proud of."

The project, which cost more than $1 billion, involved negotiations with 300 landowners and contains a mix of different turbines made by several companies including Mitsubishi, General Electric, and Siemens, writes CNET's Candace Lombardi.

The complex is about 220 miles west of Dallas and 300 miles south of the land where billionaire oilman T. Boone Pickens had planned an even larger wind farm before he scrapped the idea in July.

Texas leads the U.S. in wind power production, and this wind farm tops the capacity record of 735.5 megawatts set by another West Texas farm southwest of Abilene.

Renewable energy makes up a small fraction of the electricity grid, but the wind and solar sectors were among the fastest growing in the U.S. before the recession. Wind power in Texas has grown again this year but has slowed from the 2008 rate.

"We are expecting '09 to be a somewhat smaller year overall, but still a fairly solid year," said Kathy Belyeu of the American Wind Energy Association.

At the Roscoe wind farm, the turbines range in size from about 350 feet to 415 feet tall, and they are generally spaced about 900 feet apart, Woodson said. The land is leased, mostly from dryland cotton farmers who continue to work the fields around them, Woodson said. Texas is the leading U.S. producer of cotton, most of it from West Texas.

"It's a use that appears to be quite complimentary," Woodson said. "This whole community was extremely welcoming to us."

E.ON has facilities around the state, but it could be awhile before the company builds more huge wind farms in West Texas because of the glut of wind companies and lack of transmission lines, Woodson said. The state is planning more lines from West Texas to more heavily populated areas, but they won't be completed for at least two more years.

Pickens cited the transmission problem when he bailed out on his planned wind farm. He had already invested $2 billion in 687 turbines when he pulled the plug on the 200,000-acre project.

E.ON is one of the top 10 wind power companies in the world, the company says on its Web site, with operations in the U.S. and Europe.

Why is Houston so prone to major flooding?