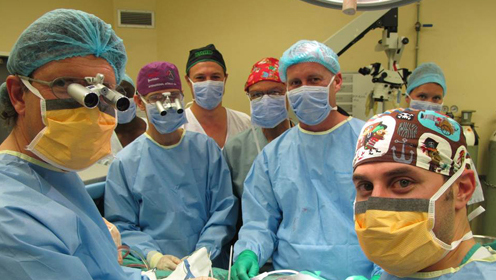 The recipient of the world's first penile transplant will soon be a father, the South African outlet News24 reported on Thursday. The 21-year-old man recently informed his surgeons from Stellenbosch University and Tygerberg Hospital in Cape Town that his girlfriend is pregnant.

The nine-hour operation took place in December of last year, but was not publicly announced until March, since his doctors wanted to see how the patient would recover. Just months after the surgery, the man, who has not been named, reported that he had regained all urinary and sexual functioning with his new penis. Now, his girlfriend's pregnancy confirms its reproductive functioning, Andre van der Merwe, head of Stellenbosch University's division of urology, said in a public lecture, News24 reported.

The patient originally had to have his penis amputated after severe complications from a botched circumcision, a major health concern in parts of South Africa. Traditional circumcision practices can cause disfigurement, loss of the organ, and even death from infections.

This first penile transplant was part of a pilot study, and Van der Merwe has said he hopes the procedure will one day be performed at multiple hospitals throughout the country.

"There is a greater need in South Africa for this type of procedure than elsewhere in the world, as many young men lose their penises every year due to complications from traditional circumcision," Van der Merwe said back in March.

The patient is currently still under observation for possible improvements to be made in future surgeries.