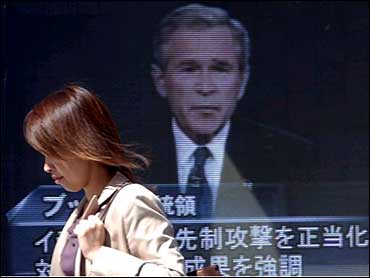 Foreign viewers and analysts seemed to concur with their American counterparts on the debate between President Bush and Sen. John Kerry: Neither candidate made the kind of gaffe that will cost him the election, but Kerry fared slightly better.

Whatever the early verdicts were, one thing was clear: the debate attracted a lot of viewers overseas, even though Europeans had to stay up late to see it, and Asians had to wait until Friday morning their time.

"Kerry seemed to show that he had the stuff to be president. He had more facts in his head, and he was able to explain his position in Iraq," Strothe said. "He is back in the race. This will help him in the race."

In France, Dominique Moisi, of the French Institute for International Relations, said Kerry had prevailed on a night that breathed new life into the campaign.

The race "is reopened by the debate. Had Kerry been mediocre, the presidential election would have been a clear-cut deal," he said.

In Russia, Italy and Sweden, media Web sites also declared the Democratic challenger the winner, but some said that may not be enough for a comeback in the polls.

London's Financial Times portrayed it as more of a draw, but one that didn't seem to benefit Bush, a Republican, in some polls.

"There was no single moment which sealed the debate for one man," FT correspondent James Harding wrote on the paper's Web site.

He cited the results of three post-debate polls that suggested that U.S. viewers were impressed by Kerry, with most saying he outdid Bush.

"Ahead of the debate, there was a sense that Mr. Bush could effectively seal the election by winning the debate on Thursday night. That, judging by the unreliable instant polls, did not happen," he wrote.

Uncommitted U.S. voters who watched the debate said Kerry won against Mr. Bush, and most of those voters improved their opinion about the Democratic candidate because of the debate, according to a CBS News poll.

Forty-three percent of the uncommitted debate-watchers picked Kerry as the winner, while 28 percent chose Mr. Bush. Another 29 percent said it was a tie

During the debate, Kerry claimed that Americans have been left with an "incredible mess in Iraq." Bush said Kerry's varying positions about the war have left U.S. troops wondering how they could follow him as their president.

In addition, the two presidential candidates debated the situation in Russia, with Kerry saying President Vladimir Putin's crackdowns during the war on terror have been excessive.

"I had the impression that Bush used his popular appeal very cleverly," he said.

But Germans couldn't help but notice that Kerry's stand regarding the Iraq war is closer to Germany's, a country that refused to send soldiers, Erler said.

Kerry "is against unilateral American actions. He doesn't believe that the superpower America can solve all the problems of this world alone. That corresponds with the beliefs of ... the German government," he said.

Germany's ZDF television introduced the debate on its morning news bulletin with the words "John Kerry won — at least the first television debate."

Reporting from the debate site in Florida, the British Broadcasting Corp. headlined the analysis on its Web site: "No knockout blow."

"Mr. Kerry was able to strike some serious blows against the president in his handling of the war in Iraq. He charged that the war was poorly planned, and that it had been a distraction in the war on terrorism," the BBC report said.

"Even some of President Bush's supporters are likely to say that they would have liked to have seen him make a more convincing defense of his policies."

Still, the BBC said that despite Kerry's criticism, Bush "didn't make any serious gaffes that could have left a serious opening for the challenger."

In Russia, analyst Alexander Kremenyuk said, "Frankly speaking, for an acting president, Bush looked quite weak. He was defending himself. He wasn't attacking much. ... At some points, he had to justify himself."

Some Asian viewers also saw Kerry come out ahead in the debate.

"I don't think President Bush did such a good job on the issues. He seemed to waver," said auditor Rob Liew, a critic of the U.S.-led invasion of Iraq who watched the debate while sipping coffee in Singapore.

Thousands of miles away in Tokyo, salesman Yasuyoshi Eguchi was just as certain about who ought to be U.S. president.

"The ties between Japan and the United States got better after Bush took office," said Eguchi, who hadn't yet heard the debate. "I think Bush is more suitable for the job."

Interest in the U.S. race is high in Asia, where countries such as Japan, South Korea and Singapore support the U.S. policy in Iraq.

In South Korea, newspapers portrayed the debate as proof that both candidates would not tolerate North Korea as a nuclear power.

TV stations such as Singapore's Channel NewsAsia carried the whole debate with commentary, and China sent five professors to attend the debate to learn more about American politics.

China didn't comment on the U.S. presidential race, but Beijing is clearly interested in the candidates' stands on Taiwan.

Taiwan — a self-ruled island that China claims is part of its territory — didn't come up in the debate.