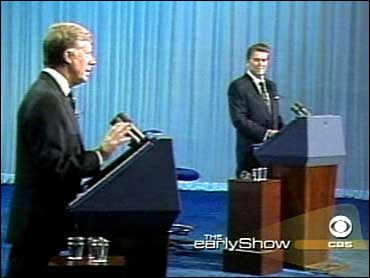 Ask someone what he or she remembers most from the presidential debates four years ago, and you're as likely as not to hear, "Al Gore's sighing."

Few remember his position on any of the issues.

And that, notes CBS News Correspondent Bill Plante on The Early Show, is typical.

Fleeting glimpses and quips frequently wind up as the most lasting impressions from presidential debates.

Remember the look on George W. Bush's face when Gore approached him during one of the 2000 sessions?

How about Mr. Bush's father's now infamous glance at his watch in 1992, as if he couldn't wait for that debate to be over?

Watch the debate on your local CBS station, or here on CBSNews.com. We'll be tracking the reactions of more than 200 undecided voters from across the nation as they listen to the candidates debate the issues. See their feedback live on CBSNews.com, beginning at 9 p.m. ET.

Things like that can make debates dangerous, noted David Gergen, an adviser to Presidents Nixon, Ford, Reagan, and Clinton. "The importance of the debate all depends on how close the race is. Very close race, the debates can be decisive," Gergen says.

Sometimes, Plante observed, just a good line or two does more for a candidate than an hour's worth of statements.

And there have been times when a candidate just plain blew it, as in 1976, when Gerald Ford seemed oblivious to Communism in Europe, saying, "There is no Soviet domination of Eastern Europe."

It happened again in 1988, when moderator Bernard Shaw asked Michael Dukakis, who opposed capital punishment, if he'd favor death for someone who had raped and murdered his wife and Dukakis replied, "No, I don't, Bernard. And I think you know that I've opposed the death penalty during all of my life."

Ronald Reagan, with decades of acting and speaking experience, may have been better at seizing the moment.

In 1984, he neutralized he age issue when he said of the much younger Walter Mondale, "I am not going to exploit, for political purposes, my opponent's youth and inexperience."

In 1980, Reagan came up with a one-liner that made the core argument of his campaign: "Are you better off than you were four years ago?"

Gergen said that line was powerful because, "Reagan was asking the critical, rhetorical question of the campaign, and most voters said, 'No, we're worse off,' and they voted for Reagan."

Televised debates were supposed to give candidates a national forum to discuss the issues. But, said Plante, in the format candidates want, which really isn't a debate, the sessions can amount to political reality TV, and become fodder for comedians.

Traditionally, Plante added, the first presidential debate is the most-watched, and that puts a lot of pressure on the candidates to come away looking like a winner.

But an unscripted instant could well wind up as the most lasting impression of tonight's Kerry-Bush confrontation.