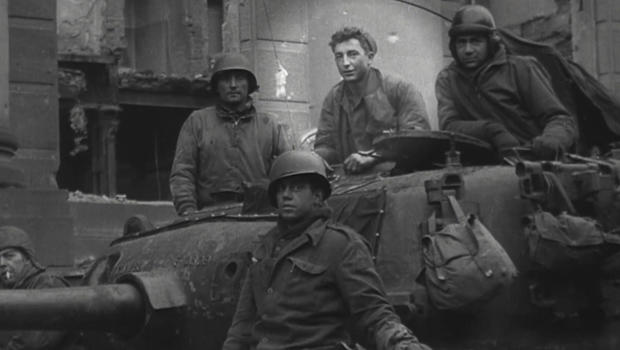 This 94-year-old's journey from Pennsylvania all the way to a tiny grave in Cologne, Germany, is deeply personal. "I'm sorry Katharina. I never forget you," whispered Clarence Smoyer.

He never met Katharina Esser. Yet, always feared her death might be his fault.

"What were you thinking when you were at her grave?" asked correspondent Seth Doane.

"I ask her forgiveness if it was my shot that harmed her," Smoyer replied.

It was a shot that still haunts him, more than 70 years after he fired it in World War II.

At the time, Smoyer was a gunner with the U.S. Army's 3rd Armored Division. He'd come ashore in Normandy three weeks after D-Day, criss-crossed France and Belgium, and in March of 1945, the fight to capture the key city of Cologne lay ahead:

"Our lieutenant got on the radio and he said, 'Gentlemen, I give you Cologne. Let's knock the hell out of it,'" Smoyer said.

Incredibly, Army photographer Jim Bates, who was documenting the Allied advance, filmed Smoyer's Pershing tank in a battle with a German Panzer – a fight that's now seared into Smoyer's mind: "I saw movement over my left side," he recalled. "I fired armor-piercing shells through the corner of the building, thinking maybe I'd get a lucky hit that would knock the tank out. This little German car came around the corner right down the street in front of us, and I think I may have been the one who hit the car and wounded Katharina."

"A young girl was taken out and lying in the street there," Smoyer said. "Still alive, but she was shot in the chest. I saw the medics were there and treated here, and left her lying beside the car. She didn't deserve to die in that way.

"All the time I see her, I see her lying in the street."

Doane went back to that street, now bustling, with Smoyer. To him it was almost unrecognizable.

He said it was the film that jogged his memory. He admits he's a little confused between what he recalls from that day versus what he later saw in that film stored away for decades at the National Archives.

"I could see her hair," he said. "And I remember seeing her eyes blink."

Historian Adam Makos is author of the book, "Spearhead" (out in February), which chronicles Clarence Smoyer's battles through Europe. "He had heard somebody said, 'Hey, they've uncovered the film of the 3rd Armored Division fighting in Cologne and I think that's your tank.' And he plugged it into his VHS player, and the war came back to him."

"Clarence had seen a lot of death and destruction, but it was this moment in Cologne that stayed with him," said Doane.

"I think there was something about Cologne," said Makos. "It's the narrow streets. I mean, it was close urban warfare. They're worried about Germans dug into the basement. You have German soldiers and snipers moving through tunnels, through the walls of the houses, and then on top of that you have to worry about a German tank coming around the corner."

Inside the German tank, which also fired toward Esser's car, was bow gunner Gustav Schaefer, whom Smoyer met years after the war, and befriended. The former fighters from both sides were united by the fear they'd been the one who'd killed Katharina Esser.

While working on the book, Adam Makos also developed a friendship with Smoyer, and tried to help the man he sees as a war hero come to terms with the past.

"And so the more he watches the film, the more he replays it in his mind, the deeper it sinks, and now it's part of him," said Makos. "You don't think a WWII veteran as holding onto something like this. But they suffered just like the guys in the modern wars."

He set up a dinner in Cologne so Smoyer could meet some of Katharina Esser's extended family, including her niece, Leni, who's 83.

They shared stories, and toasted to her memory.

"How should I say? History becomes real," said Mark Hieronimus, who has a Ph.D. in history, and is a relative of Esser's.

"It was a nice friendly meeting, but this is a man who was responsible for taking the life of your great aunt?" asked Doane.

More than 70 years later, on what he acknowledged was likely his last trip, Smoyer went up to the top of Cologne's cathedral, to look over a now-peaceful city that's been rebuilt.

Down in the nave of the cathedral, he took another moment to reflect, and to light a candle. "I ask her forgive me if it was my shots that harmed her," he said.

Doane said, "You probably have to forgive yourself."

He still has nightmares, and admits there are still tears. This veteran is proud of his service, but says the battle never truly goes away.

UPDATE: On September 18, 2019, Smoyer, now 95, was belatedly awarded the Bronze Star in a ceremony at the World War II Memorial in Washington, D.C.