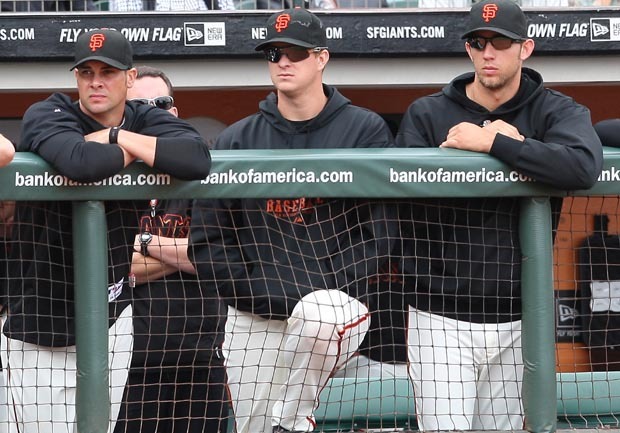 SAN FRANCISCO Madison Bumgarner will pitch Game 2 of the World Series for San Francisco on Thursday, giving the Giants back-to-back lefties after Barry Zito goes in the opener against the Detroit Tigers.

"Bumgarner has been slaughtered for an 11.25 ERA over two starts, surrendering 10 earned runs over eight innings. His fastball velocity has remained down a few ticks, and his command has been unsteady," Miller writes. "Slotting Cain, who started Monday's clincher, behind Vogelsong also ranks as a mild surprise. Cain could have started Game 3 on Saturday on regular rest, and then been lined up for Game 7."

The Giants are still finalizing their roster, though manager Bruce Bochy reiterated All-Star game MVP Melky Cabrera will not be added. Cabrera received a 50-game suspension Aug. 15 for a positive testosterone test and was eligible to return for the NL championship series. San Francisco insisted he wouldn't come back this postseason.

COKE HAPPY TO RETURN TO AT&T PARK: Phil Coke remembered the only other time he had in AT&T Park. Back then, he was a student at San Joaquin Delta College and just another fan.

"I actually sat right out here on the second tier here by the foul pole, and watched the game," the Detroit reliever said Tuesday, a day before the World Series opener against San Francisco. "I watched Barry Bonds hit two bombs. I came sprinting up the stairs over in the right-field corner and they announced his name. I tore through the parking lot and handed my ticket off and ran up the stairs in time to see the pitch, the swing and him launch the ball into the water. It was pretty cool."

Leyland said he hasn't figured out who will close in the Series.

"My only expectation is that I want to go out there and do the best job I can," Coke said.

GAME 7 ATTENTION: San Francisco's 9-0 win over St. Louis in Game 7 of the NL championship series was seen by 8.1 million households on Fox, competing for attention against the third debate between President Barack Obama and Mitt Romney.

The game averaged a 4.9 rating and 7 share, according to fast national ratings, and peaked at a 5.8/9 just before the debate began.

Detroit's sweep of the Yankees averaged 5.9 million viewers and a 3.8 rating this year on TBS.

Reliever Guillermo Mota has been part of the team's postseason roster following his 100-game suspension for a second violation for a positive test. Bochy didn't plan to announce his World Series roster until Wednesday.

Cabrera was suspended Aug. 15 for 50 games after testing positive for testosterone, and the ban ended with the completion of the division series. The Giants activated Mota on Aug. 28 after he came off the restricted list.

Mota tested positive for clenbuterol, which he said was in children's cough syrup. His first suspension came in November 2006 when he was with the New York Mets. Mota became just the third major league player disciplined twice for positive drug tests.

"I think they're two different situations really," Bochy said. "I mean, one happened during the season with Mota, and he was available to help us out during the season. So we made a spot there for him. Now, with Melky, we felt when that happened, as far as losing him, the club played very well, and the guys that we had been putting out there have done the job. They've earned this, and this is the way we're going to move forward."

Cabrera played for a few years as a teammate with Sandoval's older brother, Michael, back home in Venezuela. Michael would often brag about his younger brother's exploits.

"He always told me his little brother would be good, and he's right," Cabrera said. "It's very exciting to see."

Sandoval remembered watching Cabrera back home and marveled at his talent.

"I have a good relationship with all those guys," Cabrera said. "It will be exciting to play against them. It will be extra motivation."