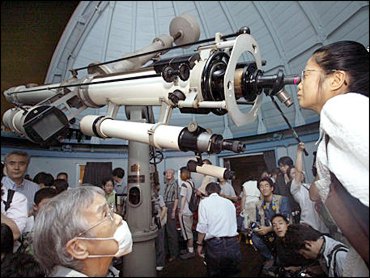 Mars glowed bright in the night sky Wednesday, making its closest pass to the Earth in 60,000 years and delighting thousands of stargazers around the world.

Mars is usually about 140 million miles away from Earth, but on Wednesday its orbit brought it about 34.6 million miles away, reaching the closest point at 5:46 a.m. EDT. The planet will not be so close to Earth again until 2287.

If you missed it, CBS News Correspondent Steve Futterman reports there will be plenty of opportunities to catch a glimpse as Mars will continue to shine brightly through September and into October.

For those on the ground, the best view of the red planet was from the southern hemisphere. But the sharpest eye on Mars was the orbiting Hubble Space Telescope, which snapped dramatic close-ups of the passing planet.

"We've never seen this kind of resolution in Hubble images, that kind of detail," said Cornell University astronomer Jim Bell as he admired the first pictures released early Wednesday. He pointed to a wall face on the Valles Marineris, a giant canyon that runs 2,800 miles across the Martian surface.

Mars was much higher in the sky in the southern hemisphere than in the north, giving a better view. In the United States or in Europe, Mars will not get 20 or 30 degrees above the horizon, while in Argentina or Australia it will be at 70 degrees, almost directly over the heads of viewers. The good viewing will last for days as Mars pulls away from Earth, astronomers say.

David Laney, head astronomer of the Cape Town Observatory in South Africa, said the best vantage point was Tahiti, but viewing would be spectacular anywhere.

"The planet is at its biggest and brightest from any position," Laney said. "There is something special about being eyeball to eyeball with Mars."

In Australia, cloudy weather had threatened to spoil the view late Tuesday, but the sky cleared over Sydney and thousands of people went out to catch a glimpse of the planet in the eastern sky. The view got better overnight Wednesday as Mars rose in the horizon.

About 3,000 people gathered along Hong Kong's waterfront for a closer look. Some waited to peer through a telescope atop Hong Kong's Space Museum, while others settled for the naked eye and cameras.

In Argentina, hundreds of people bundled up against the South American winter chill and passed the night at Buenos Aires planetarium to look through three telescopes set up for the public.

The ones who waited until dawn got the best views, just before sunrise. Some Argentines looking through two small telescopes saw a blurry, fuzzy whitish ball. But those who looked through a more powerful telescope said they could make out the polar cap on one side.

Ezequiel Herrera, one of those in line, said it was worth the wait.

"This is a something that you can't do everyday. I don't have a telescope in my house. You can see it well. You can see the polar extremes," he said.

But another onlooker, who only gave his name as Roberto, was less impressed.

"I expected something redder. It just looks like the moon," he said before walking away.