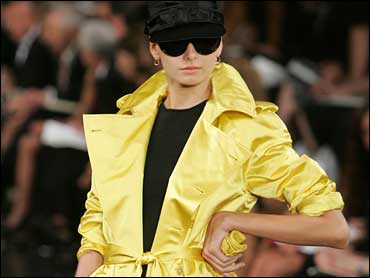 Even fashion's reigning masters of monochrome like Ralph Lauren and Donna Karan are discovering the mood-enhancing quality of color, especially for day time and most of all for work time.

Take a look at what's up for Spring 2008, from some of the top designers showing during New York's Fashion Week.

The theme was a day at the races, and some models wore oversized hats with garden-party dresses while others wore menswear-style jackets, ascots and tailored trousers. Spatlike shoes completed the look.

The jockeys were even represented with crystal-embellished jodhpurs, a yellow jersey dress with an equestrian print, and a bright pink equestrian-print taffeta jacket with splashes of blue, white, green and yellow.

Spring '08 features more colors than Lauren has shown in past years, including sunny gold, a trend also reflected in collections by Proenza Schouler and Michael Kors.

At 67, Lauren is showing no signs of slowing down. His billion dollar business based largely around high end fashion is still growing, and come 2008 he's planning on launching a new line at JC Penny.

Top Guns On The Runway

DONNA KARAN
Mix it up. That was the message Donna Karan conveyed in her spring DKNY collection. Outfits alternated between crisp white tailored looks, including a coatdress with a portrait collar and soft stretch cotton T-shirt styles.

A navy-and-orange striped dress would have been the perfect thing to wear on an Indian summer weekend day: It takes the wearer from brunch to the bookstore.

DKNY is Karan's more casual, contemporary line, and for this cool customer, there were the long, loose sundresses that her fans have grown accustomed to seeing.

She also embraced a bit of a peasant look with some of the dresses and blouses, with flowing bodices, off-the-shoulder necklines and bell sleeves, but the prints she used had a hint of graffiti to them.

In her notes, Karan said she was aiming for "clothes that reflect the creative urban spirit."

She added: "Everything is sexy, shaped and striped with sophistication. Sharply defined at the waist with a contrast sash
belt, infused with New York's eclectic, energetic style."

2 PETER SOM
Peter Som turned out a collection of classic American sportswear at his fashion show, offering chic daytime dresses with full skirts, metallic eveningwear and even tweed, no matter that the preview was for spring.

The tweed, though, looked appropriately light, not like its cozy fall cousin. It was a mix of bright colors that he called "pixel," and the best look of the group was a silk chiffon dress with horizontal pleats on the top and vertical ones on the bottom.

"He's someone everyone has had their eye on for a while," said
Kate Betts, editor in chief of Time Life + Style. "But what had been missing up until now is a commitment to American design. He had a European moment there for a while, but I think this is what's right for him. He's talented."

Som recently was named the creative director for legendary design house Bill Blass, which made its name with sophisticated sportswear.

Som showed that he will be able to fill Blass' shoes when it comes to the all-important "lunching suit" for both brands' upscale customers. One of the best on the runway at the Bryant Park tents at New York Fashion Week was a gray seersucker skirt suit with a sheer-pleat overlay that added femininity to an otherwise refined look.

3CARMEN MARC VALVO
Carmen Marc Valvo is a consistent source of gala-worthy evening wear and splashy swimwear, so what was unexpected at the presentation of his spring collection was the strength of the day wear.

In his notes, Valvo said he aimed to craft clothes to dress the sirens of the sea, tempting them with seashell colors and mimicking the ocean's ripples with ruffles.

A a strapless corset with fanlike pleats was light and airy, and it looked chic with black cocktail pants - a pleasant break from the harder-to-wear cocktail shorts that have been all over other catwalks.

His swimsuits continued the broader fashion week trend of modesty. The suits were not dowdy by any means, but Valvo and his peers seem to have made the collective decision that a lot of skin is not in.

4 LUCA LUCA
What you saw is not always what you got with Luca Luca's spring collection. Many of the looks designer Luca Orlandi previewed had little hidden gems that you had to strain to see - and that is how he wanted it.

Orlandi said in his notes that he was inspired by modern stained glass.

A surprise came on a seafoam-colored chiffon dress; as the model walked, little blue beads that looked like tile were revealed under long, vertical pleats. The pleats on another cocktail dress turned into pockets somewhere around the hips.

It looks like the jumpsuit will inevitably be part of what's offered for spring, wearable or not. Orlandi's strapless version was at least pretty in an oyster-colored silk shantung fabric with a little sheen.

"He is such a master of the great dress that you can wear in the summer and wear all summer," said Linda Wells, editor in chief of Allure. She said she personally looks for all-day, all-occasion dresses, and she spotted a few of them on the Lim runway.

The fashion industry considers Lim a top up-and-comer, and he won this year's emerging talent award from the Council of Fashion Designers of America.

He owes some of his success to creating outfits that go from day to night, offering affordable prices (by designer standards) and adding a touch of embellishment to almost everything, according to Wells. "Everyone likes a little bit of that," she said with a laugh.

Some of those decorated items in the new collection were a sand-colored silk dolman-sleeve top with macrame around the neck, a black cocktail dress with silk dupioni fringe around the neckline, and a crystal-covered cheetah patchwork dress.

Not everything, though, needed bells and whistles. A stone-colored belted caftan was elegant and his "P.I." trench coats were as chic as they were practical.