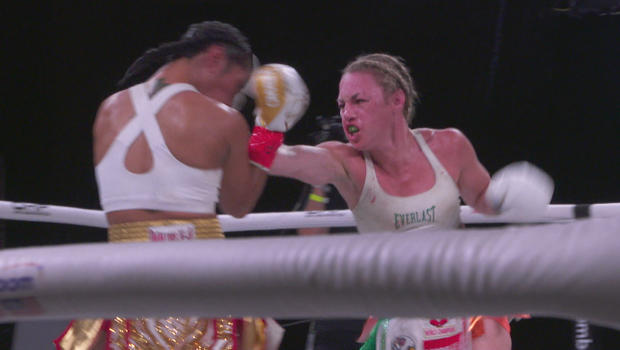 Two of the biggest names in women's boxing — Heather Hardy and Amanda Serrano — have known each other for years. But recently, when they climbed into the ring at the Theater at Madison Square Garden, in New York City, they weren't thinking about their friendship.

Correspondent Kelefa Sanneh asked, "Is it different to be punching someone who you consider a friend?"

"No," Serrano laughed. "It's strictly business."

Hardy's title was on the line. "She's the champion," Serrano said. "She has something that I want."

Serrano, who's 31, has been around boxing most of her life. She grew up in a boxing family, first in Puerto Rico and then in New York.

Hardy is 37. She's from Brooklyn, and didn't discover boxing until her twenties. But she knew all about fighting. "I used to get so surprised that grown people never got punched in the face!" Hardy laughed.

"That was a normal thing to you?" Sanneh asked.

"Kind of. I guess it's one of those things that's normal when you grow up because of the neighborhood you grew up in," she replied. "And then you go to other neighborhoods and go, 'Oh, they don't do that here!'"

There's a long history of women boxing, but recognition has come only recently. Laila Ali, daughter of Muhammad Ali, had a short but successful pro career starting in 1999. And in 2012, for the first time women competed in boxing in the Olympics.

"The girls throw down, man," said boxing promoter Lou DiBella. "They throw down as hard as any man can. And women are strong. And these women try to prove that every time they get in a ring."

It's been a long time since the glory days of boxing. In 1974, the "Rumble in the Jungle" was an international sensation. So was the "Thrilla in Manila" a year later between Ali and Joe Fraser.

Today, boxing attracts smaller crowds.  Still, top male boxers earn millions per fight, while top women make less than a tenth of that. For them, it's prizefighting without much of a prize.

DiBella said, "There is no pay equality in women's sports vis-à-vis men's sports. But God, there should be pay fairness."

The Hardy-Serrano fight was shown on Dazn, a streaming network. Serrano came in as the favorite, and it's clear why – she almost finished the fight in the first round.

Sanneh said, "Typically, fans love seeing someone get knocked out."

"Yeah, I know. It's a brutal sport," Serrano said. "I don't know why these people wanna see people get knocked out!"

"They're getting punched. They're taking damage. How do you think about that part of it?"

"I think about it a lot more now than I did when I first got into boxing 30 years ago," Serrano said. "Largely because health and safety regulations in boxing are totally insufficient."

As researchers learn more about the effects of traumatic brain injuries, the brutality of boxing becomes harder to ignore.

DiBella said, "I'm a human being. I see the same things that you see as a journalist, or that fans see. You know, I see the toll that boxing takes on the athletes. It's becoming more of a moral kind of issue to me."

Sanneh asked, "Do you ever wish that you'd chosen a different path?"

"Yeah, honestly I'm starting to wonder if it's not time to redirect a little bit," DiBella replied. "I've been in this business a long, long time."

Sanneh asked Hardy, "Did you ever think, 'This is crazy, what am I doing?'"

"Well, I didn't think that. I bet you were doing interviews and people were telling you you're crazy and then one day you just wake up and you're on CBS News, right?" Hardy laughed. "And that's kind of what it is."

"Yeah, except I'm not getting punched in the face, if all goes well," Sanneh said.

"Right! Keep it up!" Hardy laughed.

Sanneh then asked Serrrano, "Can you explain what it is about trying to punch someone in the face, getting punched in the face, what's fun about that?"

"I know. It sounds barbaric when you say it like that," Serrano laughed. "I mean, I love punching people in the face, yes! I think it's just going out, and accomplishing something that you didn't think you can accomplish. Like, I need to get punched in the face to make me happy."

And Amanda Serrano was very happy on fight night. There was no knock-out; Hardy survived all 10 rounds, but Serrano won by decision.

Sanneh asked Serrano, "What do you think about in a moment like this? You just won this fight, you have another championship bout, there's big fights on the horizon, are you thinking about that right now?"

"No, I'm thinking about going home right now and eating! And then enjoying my life," she laughed.

But for Hardy, it was the first loss of her career. When asked if it were possible for her to feel proud about her performance, she silently shook her head "No."

And things got worse: Hardy tested positive for a diuretic, a banned substance. She received a six-month suspension from boxing and a $10,000 fine, which she's appealing. She also damaged her reputation, and angered Serrano, who tweeted:

Heather Hardy doesn't know if she'll ever fight again. But she insists that it's boxing that has given her life meaning: "I've lived a life that 20-year-old Heather never would've dreamed was possible. Some people die and they don't live their life. I've lived enough for four people!" she laughed.

How suffragists finally won the right to vote for women