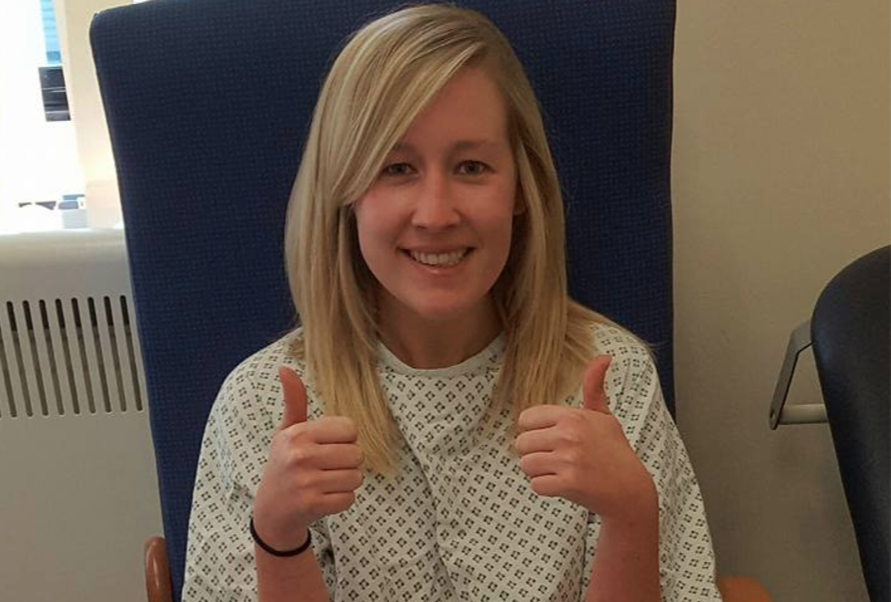 Hayley Browning has always followed her doctor’s advice when it came to routinely checking herself for lumps — she’d do a monthly check in the shower and examine her breasts in the mirror every now and then. But now the young woman is sharing a “trick” she says she was never told that led to the discovery of her breast cancer.

On World Cancer Day, three weeks after the young woman from Chelmsford, Essex in the United Kingdom was diagnosed, she took to Facebook to share her story in hopes of helping other women like herself.

“I could only feel the lump whilst lying down and it completely disappeared standing up,” Browning explained in a Facebook post, which has since gone viral with more than 150,000 shares and counting. “Most websites tell you to check for lumps in the shower but if I had followed this advice, the lump may have grown too large to be treatable. Not even the surgeon could feel my lump when I was standing up.”

Thousands of women from across the globe thanked Browning for posting her story, and began swapping warning signs of their own.

“In 1997, I found my first lump, standing in front of the mirror, saw a big shadow,” one Facebook user wrote.

“I‘m nearly 5 years clear. Mine was a thickening of the skin around the nipple,” another commented.

“That is how I found mine,” a woman told Browning.

Browning was overwhelmed with the response to her story, and said she hopes it will inspire more women to check for lumps lying down as well as standing up.

“Wow! You are all complete superstars for sharing my post,” she wrote on Wednesday. “I am so overwhelmed with all of your support. Together, we have reached so many people and have hopefully helped find more.”

Breastcancer.org recommends following five steps while performing a breast self-exam, including looking in the mirror, feeling your breasts lying down and while you’re standing or sitting.

“Many women find that the easiest way to feel their breasts is when their skin is wet and slippery, so they like to do this step in the shower,” the website says.

But Browning stresses women shouldn’t limit their self-checks to the shower.

When lying down, the breast tissue spreads out evenly along the chest wall, which makes it easier to identify an abnormality, the National Breast Cancer Foundation explained in a web post on how to perform self exams.

Browning hopes people will use a variety of ways to check for lumps.

“As I think about my long journey ahead and the chemotherapy I will undertake, I want to reach as many people with this message and help find more,” she said.