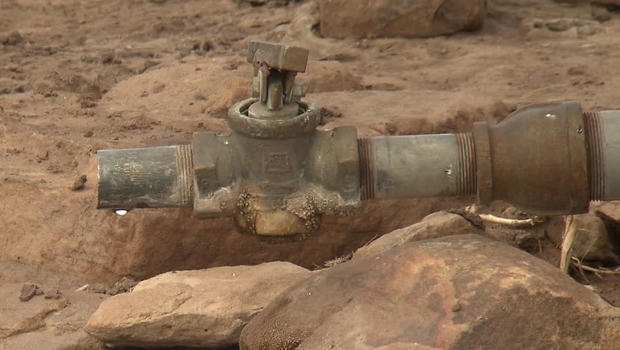 The Navajo Nation occupies nearly 30,000 square miles of territory across parts of three Western states, bountiful in its beauty but often barren of the most basic needs.

COVID hit this community especially hard; infections per capita were higher than even New York's at its peak.

While health officials warned the nation to wash our hands frequently, here that basic protection is a luxury. In more than a third of the homes, the taps are bone dry.

When correspondent Lee Cowan first visited Loretta Smith five years ago, we watched as her husband hauled water inside, bucket by bucket. And it was the same routine in nearly every other home visited.

"Most Americans take it completely for granted; they thought this problem was solved a long time ago," said George McGraw, founder and CEO of the non-profit DigDeep.

No one even knew just how bad the problem was – no government agency keeps track – so DigDeep, along with the U.S. Water Alliance, conducted their own survey. The results showed that two million Americans – and probably more – are suffering today with no safe running water, or even plumbing, in their homes.

McGraw said, "There was one finding from the report that is, I think, truly terrifying, and that's that in six states, and in Puerto Rico, during the time we were studying in the report, those states went backwards in access. The problem got worse. And I mean, how can that be?"

For the past eight years, Keystone, West Virginia has been under a boil water advisory. It's so common it doesn't even make headlines anymore.

Seventy-three-year-old Hattie Avery has lived in this once-booming coal mining town all her life: "You can run the water sometimes, and it's brown as I am, so you know that it can't be safe. There has to be something in it that shouldn't be.

"It breaks my heart really to think that we're neglected the way we are, when we've been dedicated, law-abiding, faithful citizens."

Cowan asked, "So, why do you think help hasn't come?"

"We're the town that time has forgotten, and that's the honest truth," Avery replied. "We don't matter enough."

Water is a right, she says, and in the richest country in the world, it shouldn't be denied by geography.

"I shouldn't be driven away from a place that I've loved my whole life," Avery said. "I know there's not a lot here, we don't have anything to offer, but it's home."

It's home for Tori Satow, too, who lives in Keystone with her two-year old daughter, Iris Rose. Just last month her water was out for more than a week without any notice.

"Last summer I had to fill up buckets, and heat up buckets, and put 'em in the bathtub and try to, like, sponge bathe her, because I can't have my kid going for three weeks without a bath," Satow said.

Her most reliable source of water is a trickle from an abandoned mine that she collects every few weeks.

"You definitely ration," she said. "You try to hold off taking a bath or flushing the toilet a few times, you know, every way possible to just save yourself a trip."

The situation is so dire, Cowan watched as people lined up on the roadside to catch water wherever they can.

At West Virginia's State Capitol, local politicians, like Delegate Ed Evans, know that water is a problem. But he says there seems to be little political will to fix it. "We should be writing laws that make sure that money is available to implement water systems all over West Virginia," Evans said.

Cowan asked, "Is there a sense of urgency about it?"

But it's pretty urgent for those hit the hardest; Black and Latino Americans are twice as likely as White Americans to live without running water.

Take East Orosi, a mostly Latino community surrounded by the fertile orchards of California's Central Valley.  To look around you'd think that water is pretty plentiful … and it is, for big agriculture. But in a neighborhood where most of those who work those fields live, there's no central water main.

What there IS is a huge irrigation canal that runs right through their backyards.

"This is all contracted water," said Ryan Jensen, a water-rights organizer. "All of this water is spoken for. It essentially belongs to somebody."

Jensen said residents rely on water stored in tanks above two underground wells. But both have tested positive for dangerous chemicals.

Cowan asked, "Nothing in there is really safe to drink?"

"No, it's not safe water," Jensen replied.

The water main stops in the next town over. "All it would take is three-quarters of a mile of pipeline from this on down to East Orosi to supply safe drinking water," Jensen said.

Mayra Carrillo lives within walking distance of the end of that water main, but she has to get her water from those contaminated wells.

"The communities that this is going on is low-income people that work hard for their money, and still have to work extra to get clean water," Carrillo said.

She has three kids, too. She uses expensive bottled water for them – and there's never enough.

She asked, "Do we deserve to live like this? Are we just pretty much trash? Like, we deserve clean water."

"Does that make you angry?" Cowan asked.

"It does. Very upsetting and heartbroken more than anything."

Cowan asked DigDeep's George McGraw, "Is there a thread that runs through all these communities, as to why this is happening?"

There are plenty of solutions out there, including a system of solar panels that miraculously extracts about a thousand gallons of drinking water every month just from moisture in the air.

McGraw, with his DigDeep nonprofit, partnered with a food bank to install it in the mountains of West Virginia. Why the food bank? Because according to its director Linda McKinney, for many here drinking water is in shorter supply than food.

"The days of waiting for someone to come and save us, that's not going to happen," McKinney said. "We're going to have to help ourselves, and that's what I try to do every day here."

Back on the Navajo Nation, Marcus Morgan and his family just got their first ever faucet inside their home. It's connected to a water tank DigDeep buried in the front yard that can be filled up once a month.

For his children, including two with Down Syndrome, it was a miracle.

"I'm at a loss for words to express my appreciation," said Morgan. "All I can say is, thank you. A great big thank you."

Cowan also went back to the home of Loretta Smith, who had a sink that was essentially useless.

Not anymore! "I feel like I'm way, way, way out in outer space!" she laughed as water sprayed out of the tap. "Now I have running water and everything works. It's just like magic happened!"

Maybe it wasn't so much magic as it was righting a wrong. Water, like any human right – shouldn't have to be debated.

Hattie Avery said, "I just hope that I'll be able to see it in my lifetime, where the children who are coming up now, won't have to deal with these problems. Won't have to face the things that we're facing," she sighed. "We'll see. We'll see."

Self-defense classes teach older Asian Americans how to fight back

Shut down by COVID, nightclub transforms into grocery store
More