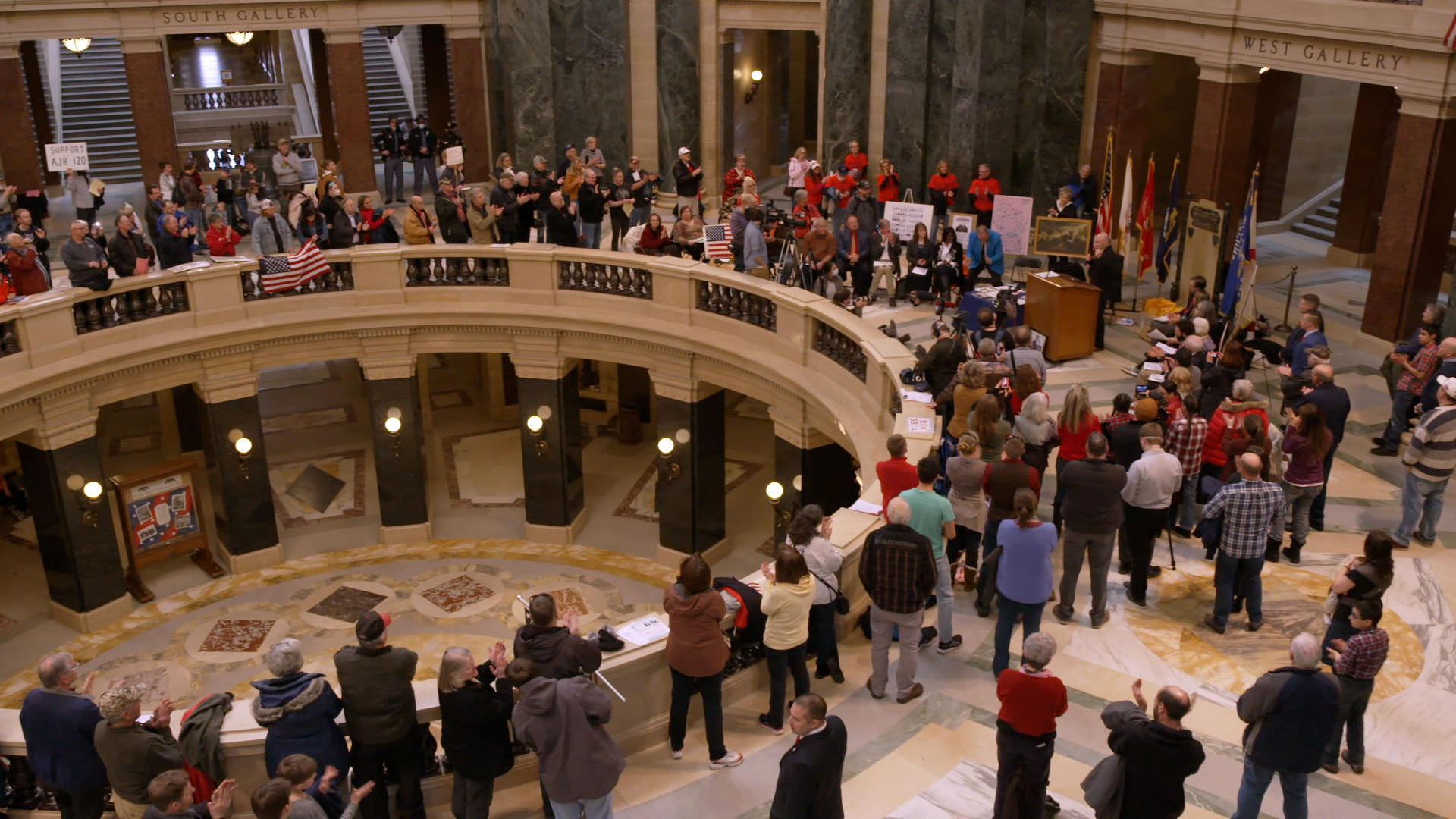 The primary season is already underway for this fall's midterm elections. And according to a CBS News poll, 61% of voters say they want politicians to address the voting process. Former President Donald Trump insists voter fraud cost him re-election, despite having lost more than 60 lawsuits challenging the process. Nearly three-quarters of Republicans believe Joe Biden's victory was illegitimate. And Republican-controlled legislatures in battleground states – including Arizona, Florida, and Georgia – have rewritten election laws. Republicans say it's in order to make voting more secure. Democrats say it's to make it harder for their traditional base to cast ballots. Perhaps no state is more contentious than Wisconsin, which Joe Biden won by less than one percent of the vote, and where a battle is raging over voting rights and wrongs.

Bill Whitaker: Was the 2020 vote in Wisconsin clean and fair?

Bill Whitaker: The election was not stolen from Donald Trump?

Kathy Bernier: No. The election was not stolen from Donald Trump.

Kathy Bernier is a Wisconsin Republican state senator. She told us widespread voter fraud is all but impossible in Wisconsin.

Bill Whitaker: How is it that you can say that with such certainty, and such conviction?

Kathy Bernier: Because I know the process.

A diehard conservative, Bernier began her political career overseeing elections as clerk in Chippewa County. Today, she chairs the state senate committee on elections and calls the talk of voter fraud a charade that will hurt Republicans at the polls.

Kathy Bernier: I voted for him twice.

Bill Whitaker: But now I hear you saying almost the exact opposite from what former President Donald Trump says, and his supporters are saying now.

Kathy Bernier: I don't know why people don't want to hear the truth. But it is my Christian values to tell the truth and I- and I will. There is no evidence of voter fraud. It's time to move on.

But Wisconsin Republicans can't seem to get past 2020. Last month in the state capitol, Republicans from all over the state urged GOP legislators to stand firm. Rally organizer Jefferson Davis, the former village president of Menomonee Falls, had a message for Democrats.

Republicans dominate both chambers of the Wisconsin legislature and most won on the same 2020 ballot that former President Trump now contests. Republican candidates hoping to unseat Governor Tony Evers, a Democrat, either deny President Joe Biden won the election, won't say, or question the process. four GOP politicians are angling to oust Democrat Doug La Follette, Wisconsin's secretary of state. Over his 44 years in office Republican legislatures have cut his budget, reduced his duties and moved his office to the capitol basement where he spends his days certifying documents.

Doug La Follette: So why would someone want to be secretary of state?

Doug La Follette: Given the whole Trump election phenomenon there is an effort to get more control of elections in key states. And Wisconsin is a key battleground state.

And Republicans running to unseat him do want to empower the office to oversee elections.

Doug La Follette: And it's going on all across the country. There are Trump candidates running for secretary of state in many places trying to accomplish similar things.

We reached out to top Republican leaders, and all either declined our request for an interview, or wouldn't respond.

Robin Vos: Every single process, it doesn't matter what it is, can always be improved.

Republican Robin Vos, the powerful speaker of the assembly, told Wisconsin public radio half the state or more believes there were serious problems with the 2020 election. He ordered an investigation - the third by the legislature - to check for flaws in the election and propose legislative fixes.

Robin Vos: Whoever wins, the vast majority of people should think it was done fair and square.

This past June, he appointed former Wisconsin Supreme Court justice, and former deputy associate director of outreach, diversity and inclusion in the Trump administration, Michael Gableman to head up the investigation.

Michael Gableman: In that capacity I work directly for you, the people of Wisconsin.

After being tapped for the job, Gableman told the Milwaukee Journal Sentinel, like most people he didn't have "a comprehensive understanding or even any understanding of how elections work." Yet, he had told a Republican crowd the 2020 election was stolen from Donald Trump.

Michael Gableman: I don't think anyone here can think of anything more systematically unjust than a stolen election.

Not long afterward, Vos flew to a Trump rally with the former president and assured him of a top-to-bottom investigation by Michael Gableman.

Gableman, who also ignored our requests for an interview, draws a salary of $11,000 a month. He's made little attempt to be transparent or bipartisan. He revealed his staff only under pressure from the press and Democrats; some were found to have worked in the Trump administration or with stop the steal efforts. His investigation has been so secretive a judge ruled it violated Wisconsin's public records law. This month, Gableman released his interim report - live on cable TV from the state capitol.

Michael Gableman: I believe the legislature ought to take a very hard look at the option of decertification of the 2020 Wisconsin presidential election.

The legislature's own staff attorneys say there's no legal way to decertify the election.

The Associated Press found about two dozen people were charged with voter fraud in Wisconsin in 2020 out of more than three-million votes cast. But Michael Gableman says he believes the whole process was flawed. He points to grants from a nonprofit funded by Mark Zuckerberg, to help municipalities run safe elections in the pandemic. About 2,500 communities around the country - both red and blue - received funds, including 217 in Wisconsin that got about $10 million. But Gableman focused on what he calls the Zuckerberg five.

He called grants to the state's five largest cities bribes to boost votes for Democrats and quoted their grant application.

Michael Gableman: With particular emphasis on reaching voters of color, low income voters without reliable access to internet, disabilities and primary language is not English.

He found that language damning; but a federal judge appointed by George W. Bush found nothing illegal about the grants. Michael Gableman blames what he calls a botched election on the bipartisan Wisconsin elections commission - which was created several years ago by Republicans in the legislature. He especially targets its administrator, Meagan Wolfe.

Meagan Wolfe: My position is nonpartisan as is all of the staff at the Wisconsin Elections Commission.

Bill Whitaker: What does that actually mean?

Meagan Wolfe: To me, it means that I don't give any deference to political pressure, so people trying to sway us to implement elections in a way that might be beneficial to one party, or one candidate, or the other.

Meagan Wolfe was unanimously confirmed for the Wisconsin Elections Commission by the Republican-controlled state senate almost three years ago. In February of this year she was sworn in as president of the National Association of State Election Directors.

Bill Whitaker: Why are people suspicious of the outcome of this election?

Meagan Wolfe: I'm not really sure, other than it feels like people are looking for a different answer to support a different conclusion.

Bill Whitaker: A different outcome to the election results?

Bill Whitaker: Where is that coming from?

Meagan Wolfe: People's freedom to vote is a sacred right. And they take that very seriously. But then there's other people that I think are trying to weaponize misinformation to mislead people for a partisan purpose.

By her account, Michael Gableman is revising history, making extraordinary measures they had to take to run a safe election in a deadly pandemic seem sinister.

During the presidential primary in April 2020: long lines, scared, cold, frustrated voters. Three weeks earlier President Trump had declared a national emergency. On Election Day, Assembly Speaker Vos, in protective gear, told voters there was nothing to worry about.

Robin Vos: It's going smoothly, seems to be pretty fine in almost every part of Wisconsin so I'm proud of what we're doing.

With all the uncertainty, the Bipartisan Elections Commission had to make snap decisions, reinterpret election laws to fit unprecedented circumstances - all done transparently in public Zoom meetings.

The elections commission gave communities guidance on absentee ballots - which shot up from 4% to 40% of all votes. They endorsed expanded use of dropboxes. Instead of holding on-site voting at nursing homes, which were COVID hot spots at the time, the committee ordered election clerks to mail ballots to residents who'd requested them. In his report, Michael Gableman claims all those decisions were illegal.

Bill Whitaker: You were the first state in the country to have to have an election in the middle of this pandemic.

Meagan Wolfe:  We were. I still get goosebumps when I think about the fact that in all 1,850 municipalities across our state they were able to open their polls on Election Day. They didn't have poll workers. They didn't have supplies. And they were risking their health.

Nevertheless, Michael Gableman accuses the elections commission of stealing citizens' votes. Twenty-three GOP legislators are calling for Meagan Wolfe and elections commissioners to be investigated and possibly prosecuted for criminal conduct. Gableman proposes eliminating the bipartisan commission altogether and giving its duties to elected officials, who he says would be more accountable to voters. This past week the legislature extended Gableman's contract.  His investigation will continue at least through april.

Bill Whitaker: In your estimation, is that a-- credible investigation?

Bill Whitaker: Just flat out no?

Kathy Bernier: No. We need to close this up. We need to move on and we need to elect Republicans in 2022.

Republican State Senator Kathy Bernier plans to retire when her term is up in January. She won't be running in 2022, but she says the stakes couldn't be higher.

Kathy Bernier: Donald Trump is still the head of the Republican party as I see it. He is likely gonna' run in 2024. He has a lot of power, and a lot of influence, and I respect that. So I don't happen to care about that.

Bill Whitaker: What do you care about?

Kathy Bernier: That we leave this country better off now than it was in the past. We're going down a slippery slope. And maybe it's not just politics to me, it matters.

Preppers in 2022: Stocking up and skilling up for extreme catastrophes