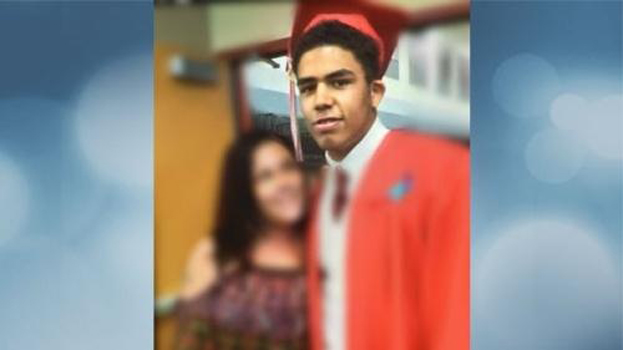 MADISON, Wis. - An unarmed biracial man fatally shot by a white police officer tended to be an impulsive risk-taker and faced a choice between a middle-class lifestyle and the gang world, according to court documents.

The file connected to 19-year-old Tony Robinson's conviction last year for armed robbery shows he was diagnosed with attention-deficit disorder and anxiety and depression. The documents were contained in a report by a state Department of Corrections agent.

Madison police officer Matt Kenny shot Robinson on Friday evening while investigating a call that the young man was jumping in and out of traffic and had assaulted someone. The officer heard a disturbance and forced his way into an apartment where Robinson had gone. Authorities said Kenny fired after Robinson assaulted him.

The shooting is the latest in a series of police-involved shootings to spark racially tinged demonstrations, including in Ferguson, Missouri, where officer Darren Wilson shot unarmed 18-year-old Michael Brown in August. That shooting sparked weeks of unrest.

The Associated Press had described Robinson as black based on police descriptions of him as African-American. But at a news conference Monday, family members repeatedly emphasized that he embraced a biracial identity from having a white mother and black father.

"We don't want to stop at 'black lives matter' because all lives matter," including multiracial people like Robinson, his uncle, Turin Carter, said.

Madison Police Chief Mike Koval has tried to strike a conciliatory tone with the city's black community, calling Robinson's death a tragedy and even going so far as praying with Robinson's grandmother in her driveway hours after the shooting. On Monday, he wrote on his blog that he was sorry Robinson died and hoped his family could find forgiveness in their hearts.

"The police are part of this community - and we share this sense of loss," Koval wrote.

Police spokesman Joel DeSpain clarified in an email that Koval was not acknowledging any wrongdoing by Kenny or the department.

The state Justice Department's Division of Criminal Investigation is leading the probe into the shooting because of a new state law that requires outside agencies to investigate officer-involved shootings. A Justice Department spokeswoman did not respond to an email Monday seeking an update. A final report is probably weeks or months away.

Preliminary autopsy results were not expected until midweek at the earliest.

About 1,500 protesters held a demonstration Monday in front of the state Capitol, chanting Robinson's name, "black lives matter" and "hands up, don't shoot." Many of the protesters were high school students who skipped class to join the rally.

"I think the fact he was black did lead to an unfair shooting," said 19-year-old Sedgwick Smith, a student at Madison Area Technical College. "If he would have been white, he wouldn't have been shot. Period."

The crowd moved into the Capitol, filling the rotunda. They chanted for about 40 minutes before heading back outside without incident.

According to a criminal complaint in the armed robbery, Robinson was among a group of five people who staged a home-invasion robbery in Madison in April 2014 looking for marijuana and money.

Police captured Robinson as he fled the apartment. He told investigators he carried a BB-gun pistol with him during the robbery and stole a TV and an Xbox 360 from the apartment. Judge Josann Reynolds sentenced him to three years' probation in December.

Family members refused Monday to answer a question about Robinson's diagnoses. At a news conference, Carter, the uncle, said Robinson wasn't perfect but should not be judged for mistakes.

"We don't think Terrell's a saint," Carter said, using Robinson's middle name. "He was a kid. He was a 19-year-old, and he did some bad things. But we all did when we were 19. He has made mistakes. That is completely disassociated with this act."

Carter also said Robinson's family believes the investigation will be fair, and he asked that people respect the police in their protests.

"This is a bigger issue than Tony. This highlights a universal issue with law enforcement and how its procedures have been carried out," Carter said. "It's surreal to realize that my nephew is now a hashtag."

Carter said the family is asking for the demonstrations to remain peaceful.

"We want peaceful protests. We want no further tension with police officers," Carter said. "We need to change our mindset on the police."

The robbery case file includes a letter from Robinson's grandmother, Sharon Irwin, to the judge. In it, she asks for her grandson to be sentenced to probation, saying he was just following his co-defendants' lead.

Robinson "is a great kid in between being a teen and a man," she wrote. "That is one of his issues. Impulsive. The other is being a follower."

His aunt, Loren Carter, wrote a note to the judge asking for mercy in sentencing. She said Robinson grew up poor without his father but was kind-hearted and intelligent.

Robinson's defense attorney, Michael J. Short, wrote to the judge that Robinson had taken special-education classes and had never been in trouble with the law before.

"He was an easy choice for the seasoned co-defendants to manipulate into participation," Short wrote. "He did not give any orders but just followed the instructions meted out by the other defendants."

Keith Wessel, a Madison family law attorney who said he was married to Robinson's grandmother for a time, wrote to Short in September and told him that he raised two of Robinson's uncles and knew Robinson from birth.

Wessel wrote that some branches of Robinson's family exposed him to a "chaotic environment." He did not elaborate but said Robinson faced a choice between a middle-class life and the "gangsta" path. He warned if Robinson went to prison on a felony charge he would continue toward the gangster world.

He said Monday he was shocked at the shooting. He said Robinson stood 6-foot-5 but was a "teddy bear."

"I can't imagine Tony is going to fight a cop breaking into his house," Wessel said. "I just don't see that as likely ... I really think we need to examine our police policies."