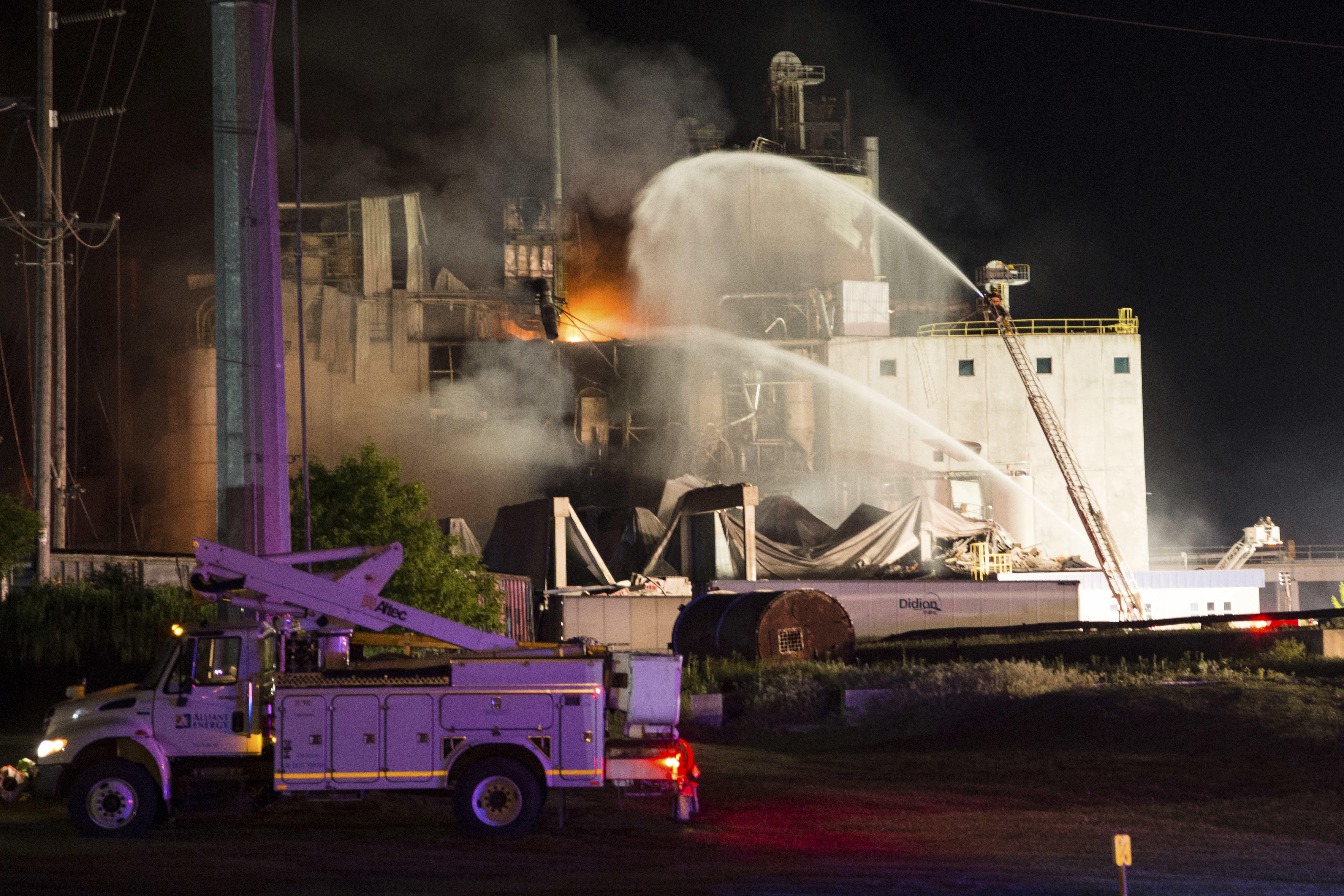 MADISON, Wis. -- - The body of a third worker was recovered Friday from the ruins of a corn mill that exploded in southern Wisconsin, two days after an explosion at the facility.

Numerous fire crews raced to the scene of the explosion late Wednesday at the Didion Milling Plant in Cambria, about 45 miles northeast of Madison, Wisconsin, CBS affiliate WISC-TV reports. The blast leveled most of the plant.

Nearly a dozen workers were taken to hospitals following the explosion and fire.

"The loss of these three team members is a very emotional incident for us and has really torn a hole in the heart of the Didion Milling team and the Cambria community," Clark said.

The cause of the explosion is still under investigation.

A fire broke out at the plant on Monday, but Clark said it was unrelated to the explosion. He said the cause of that fire is still undetermined but the company has a good idea of what caused it and it involved "a distinctly separate system" than what was involved in the explosion. He declined to elaborate.

U.S. Occupational Health and Safety Administration (OSHA) records show the plant was cited in 2011 for not taking precautions against dust explosions. They can occur when high concentrations of dust particles are suspended in the air in a confined space during grain handling. A spark from something like a cigarette butt ignites it, according to the U.S. Department of Agriculture.

There were five grain dust explosions in the U.S. last year, including two that were fatal, according to a Purdue University annual report. Keeping facilities clean of dust and equipment in good working order to reduce the possibility of igniting the dust are key to preventing explosions, the report said.

The federal safety agency ordered the mill to correct the problem by April 2011, and the records show Didion paid a $3,465 fine and the case was closed in September 2013. Clark and James Brunker, a senior executive with M3 Insurance, which insures the company, said the problem was corrected.

Brunker called the violation "ancient history." The plant's insurance risk assessment has been improving since the violation, he said.

OSHA, the state fire marshal and the state Department of Justice are all investigating the explosion, Clark said. The company has also started its own probe of the blast, he said. He added that employees weren't allowed to smoke inside the building but he refused to speculate on other causes for the explosions besides dust ignition.

"It's just too early for us to comment on any potential sources," he said. "We're confidant the systems we have in place protect our workers."

Didion Milling employs more than 200 people at multiple facilities around southern Wisconsin. Most of them work at the Cambria corn mill plant, Clark said.

The company has closed until further notice, but Clark said Friday all the plant workers will keep their jobs. Some may be moved to other facilities or retrained to handle other duties, he said.

He expects production to resume at an ethanol plant adjacent to the corn mill soon, he added.

"(The explosion has) impacted our operations but that's the least of our worries," he said.

Brothers John and Dow Didion began Didion Milling in 1972. Construction on the Cambria corn mill was completed in 1991, according to the website. The company's corn products are used in brewing beer as well as in making chips, breakfast cereals, bathroom moldings, steel and ethanol.

Man wins $250,000 after he says he dreamed of winning lottery numbers
Thanks for reading CBS NEWS.
Create your free account or log in
for more features.
View CBS News In
CBS News App Open
Chrome Safari Continue
Be the first to know
Get browser notifications for breaking news, live events, and exclusive reporting.