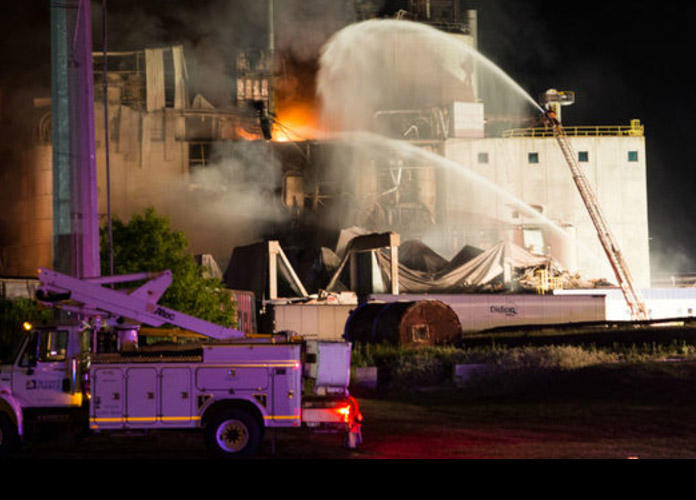 CAMBRIA, Wis. -- A Wisconsin corn mill that exploded late Wednesday night was reprimanded by federal safety inspectors six years ago for not taking precautions against dust explosions, which are a major hazard in handling grain, records show.

Numerous fire crews raced to the scene of the large explosion and fire in a corn milling plant about 45 miles northeast of Madison, Wisconsin, reports CBS Madison affiliate WISC-TV.

The blast left at least one person dead. Emergency workers were still searching for two employees as of Thursday afternoon. A dozen other employees were taken to area hospitals. None of the workers have been identified.

The cause of the blast remained unknown as of Thursday afternoon, Didion officials said. U.S. Occupational Safety and Health Administration investigators were on the scene.

"The safety and security of our employees is our top priority," Didion Vice President of Operations Derrick Clark said in a news release. "Over the past 44 years, the Didion team has grown to be a close-knit family, and we ask for your prayers during this difficult time."

The plant processes corn for ethanol and other uses. A review of online OSHA records shows the plant was cited in January 2011 for exposing its workers to dust explosion hazards. The records state that plant filters lacked an explosion protective system.

The agency ordered the mill to correct the problem by April 2011. The records show Didion paid a $3,465 fine and the case was closed in September 2013. OSHA hasn't cited the plant for anything since, the records show.

Dust explosions are a serious problem in handling grain, according to the U.S. Agriculture Department. There were five grain dust explosions in the United States last year and two of the incidents resulted in fatalities, Purdue University said in an annual report. Keeping facilities clean of dust and equipment in good working order to reduce the possibility of igniting the dust are critical to preventing explosions, the report said.

Emails sent to several Didion officials Thursday and a voicemail left for Vice President of Sales Jeff Dillon weren't immediately returned. A note posted on the company's website said the company would be closed until further notice.

Seventeen employees were working in the plant when the blast was reported around 11 p.m. Wednesday, village officials said in a news release Thursday. Earlier, authorities had said there were 16. Nearly two dozen fire departments and four police departments responded.

Cambria Village President Glen Williams said the fire was contained by early Thursday and there were no evacuations in the area. Schools in the Cambria-Friesland district closed Thursday because of the incident.

Recovery crews were still searching a mountain of debris Thursday for the two missing workers.

Two other plant employees were treated and released. Twelve more were taken to area hospitals via ambulance and helicopter.

Five people were air-lifted to the University of Wisconsin Hospital in Madison. Four were in the hospital's burn center, while the fifth was in the trauma and life support center, hospital spokeswoman Emily Kumlien said Thursday. She declined to disclose any of the patients' conditions.

Divine Savior Hospital in nearby Portage received six people hurt in the blast. Four have been treated and released, but one was transferred to the burn unit at the University of Wisconsin Hospital and another person was admitted to Divine Savior's intensive care unit, hospital spokeswoman Haley Gilman said.

Cambria is a community of about 770 people. Wiliams, the village president, said the plant is an economic anchor for the entire area.

"Quite a few of the employees live in the village and surrounding area. So it's going to affect the whole area. Not just the shock of the event, but the economic hardship to the families," Williams said.

OSHA spokesman Scott Allen said personnel from the federal agency were on the scene Thursday to begin an investigation. The agency has six months to complete its work.

The company employs more than 200 people. It has offices and a soybean plant in Jefferson County to the southwest, the mill and an ethanol plant in Cambria and an oil packaging plant in Green Lake County to the north, according to the company website.

Brothers John and Dow Didion began Didion Milling in 1972 and construction on the Cambria corn mill was completed in 1991, according to the website. The company's corn products are used in brewing beer as well as in making chips, breakfast cereals, bathroom moldings, steel and ethanol.