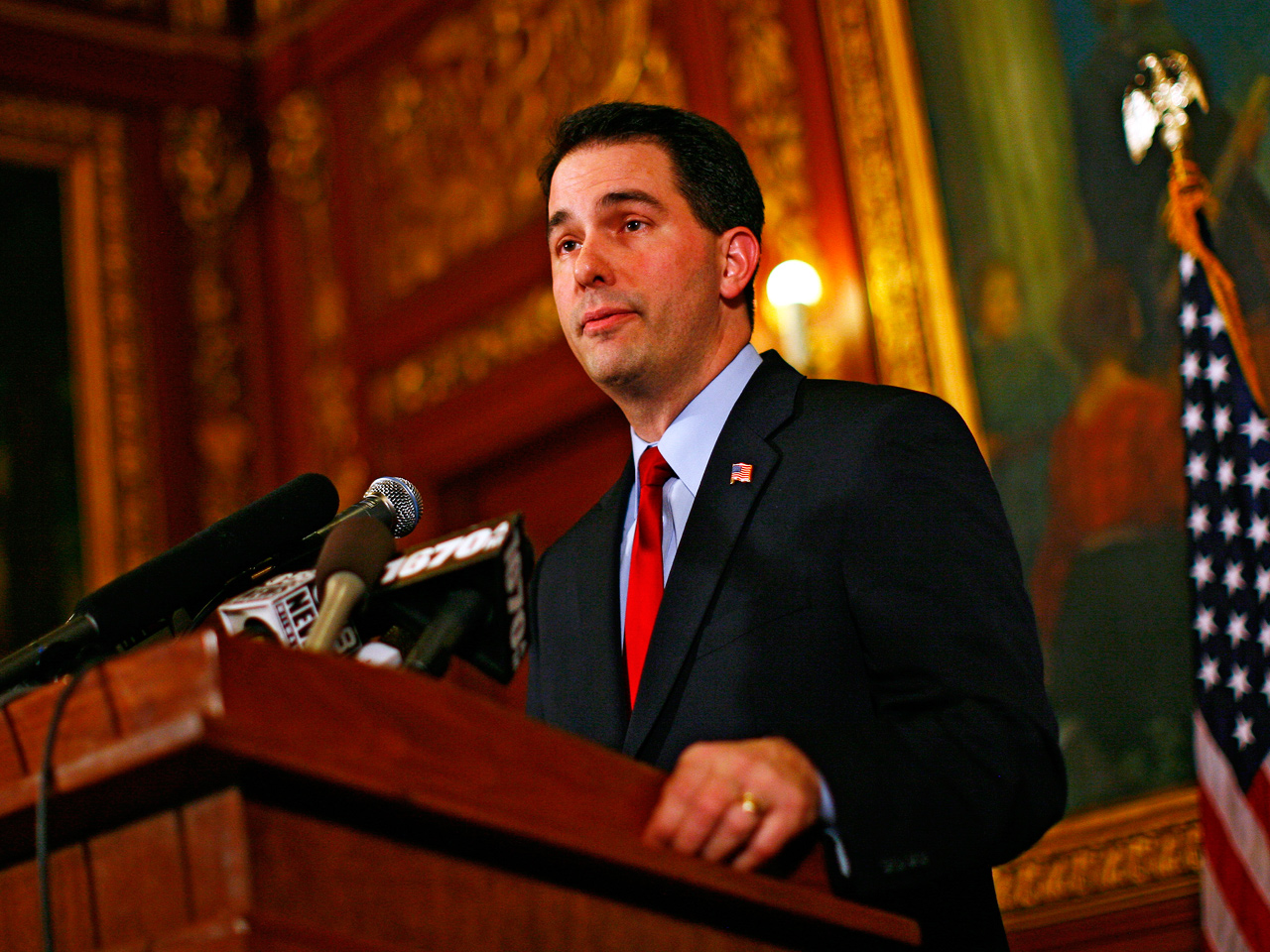 In a political prank recalling Sarah Palin's 2008 "Nicolas Sarkozy" incident, a gonzo journalist on Tuesday spoke with Wisconsin Gov. Scott Walker in a 20-minute phone call - throughout which he posed as the conservative financier David Koch.

"The obvious candidate was David Koch," Murphy writes in his report of the incident.

Koch Industry billionaires David and Charles Koch fund the conservative advocacy group Americans for Prosperity, which has launched an ad across Wisconsin as part of a "Stand with Walker" campaign. Critics of Walker point to a provision before the legislation that would allow for no-bid sale of Wisconsin state energy assets. They allege that Koch Industries would benefit from the legislation, but a spokesperson for Koch Industries told Politico that the company doesn't have any financial interest in the political battle now taking place in Wisconsin.

Bloomberg reported that Koch Industries, and its employees and subsidiaries, contributed $1.2 million in the midterm election to Republican governors who now favor curtailing the bargaining rights of state workers. Koch Industries was a major contributor to Walker's gubernatorial election campaign.

Murphy, presenting himself as David Koch, called Walker's receptionist and was directed to call back a few hours later, when he would be put through to the governor.

In the 20-minute call that resulted, Walker discusses plans for layoff notices and the strategies he is considering to punish Democratic lawmakers who have fled the state in protest of his budget proposal.

One of the strategies involved luring the Wisconsin Senate Democrats back to the Senate by physically putting their paychecks on the floor of the state Senate. He also said he was considering holding talks with a Democratic leader in order to entice the group back to the capitol, at which point, ostensibly, the Senate could make quorum.

"An interesting idea that was brought up to me by my chief of staff, we won't do it until tomorrow, is putting out an appeal to the Democratic leader. I would be willing to sit down and talk to him, the assembly Democrat leader, plus the other two Republican leaders--talk, not negotiate and listen to what they have to say if they will in turn--but I'll only do it if all 14 of them will come back and sit down in the state assembly," Walker explained.

"If they're actually in session for that day, and they take a recess, the 19 Senate Republicans could then go into action and they'd have quorum because it's turned out that way," he continued. "So we're double checking that. If you heard I was going to talk to them that's the only reason why."

Walker's office confirmed that it was indeed the governor on the line, and argued that he had said on the phone nothing more than the line which he has recently been towing in public.

"The governor takes many calls every day," Walker's spokesman, Cullen Werwie, said in a statement. "Throughout this call the governor maintained his appreciation for and commitment to civil discourse. He continued to say that the budget repair bill is about the budget. The phone call shows that the governor says the same thing in private as he does in public and the lengths that others will go to disrupt the civil debate Wisconsin is having."

In a press conference on Wednesday, Walker brushed aside the significance of the call.

"I take phone calls all the time," he said. "The bottom line is, the things I said are things I said publicly all along," Walker said. "I'm not going to allow one prank phone call to distract us from the reality that we have a job to do."

Listen to the full conversation in two clips below: