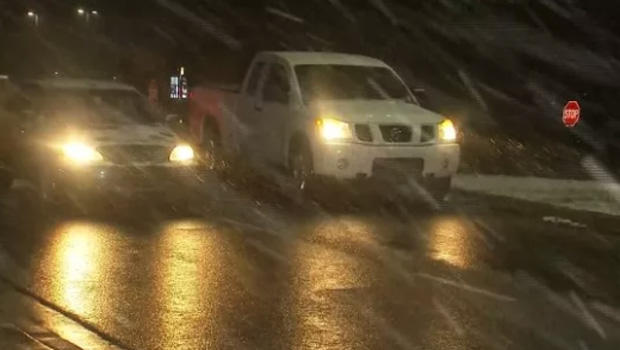 ATLANTA -- The South awoke Wednesday to a two-part Arctic mess that caused problems as far south as the Gulf Coast. First came a thin blanket of snow and ice, then came below-zero wind chills and record-breaking low temperatures in New Orleans and other cities.

The snowfall sabotaged morning rush hour before it even began, sending cars crashing into each other on major thoroughfares.

By late Wednesday morning, there were three confirmed severe weather-related deaths. In Houston, a driver lost control and hit a guard rail, then was hit by a vehicle after he got out to check damage on his truck. In Macon, Georgia, two people were killed driving on icy roads. The Bibb Count Sheriff said the icy and snowy conditions were "contributing factors" and that the accident remains under investigation.

Officials urged people to stay off the roads if possible, and to bundle up if they ventured outside. Thousands of schoolchildren and teachers got the day off because of treacherous travel and cold; cities canceled meetings and municipal court sessions. Some businesses closed.

With temperatures hovering around 10 degrees, store clerk Susan Brown got to work an hour late in the north Alabama city of Decatur. Snow and ice blanketed grassy areas and roadsides, she said, and neighborhood roads were much whiter than main highways.

"Traffic is moving along, but on side roads and residential streets it's pretty slick," said Brown, who works at Holaway's Food Market. "As long as you stay in the tracks you're pretty good.""

Dairy farmer Will Gilmer bundled up for the pre-dawn drive to the milking barn with the thermometer showing 7 degrees in western Alabama.

"It felt like single digits," he said. "I probably had four layers on and then insulated coveralls and a heavy coat on over that. I made it OK except for my toes."

Icy conditions hampered travel as far south as the Gulf of Mexico, with stretches of Interstate 10 were closed in Louisiana and across Alabama's Mobile Bay. Ice pellets covered the tops of sago palm trees.

David Johnston, a 22-year-old Georgia tech student, is used to winter in the South. "When it snows, the city shuts down," he said.

School was canceled, but he had to work -- he walked 20 minutes on snowy, icy sidewalks to get to the train and head downtown.

Many Atlanta-based offices and employers closed for the day, but Jarquiese Norwood, 28, also had to get to work: at a warehouse where he's a forklift operator. "It snows, like, every couple years," he said of Atlanta, and it's "pretty much the same every year."

He said he usually takes Uber, but the normally reasonable fare had surged to $40. "I wish I was off from work," he said as he waited for a train.

Dozens of accidents were reported in metro Atlanta, including one involving a salt truck and another involving a rapid-transit bus.

Outside Five Points Station, a major one at the center of Atlanta's MARTA system, a man fell on the sidewalk and appeared unresponsive. An ambulance came quickly, and paramedics maneuvered slowly: "I've got the stretcher," ''be careful," they told each other.

Adrian Benton, 26, tried to help. He exited a bus that had stopped but allowed passengers to remain inside for warmth.

"The up-north way of dealing with snow needs to come down here," the Buffalo, New York, native said, adding that the city should have had "snow plows, salt already going down last night so people can get around."

The blast of cold air shattered records early Wednesday in Louisiana and Mississippi.

It was 21 degrees (-6 Celsius) before dawn in New Orleans, where icicles hung off a statue of jazz musicians in a fountain. The reading broke the city's record low for the date, which was 23 degrees (-5 Celsius) in 1977.

"The runways are closed at this time due to icy conditions," Louis Armstrong New Orleans International Airport tweeted Wednesday morning. "Airlines have cancelled morning flights to and from the Airport. We will continue to monitor the runway surface conditions and will reopen the runways only when it is safe to do so."

In Mississippi, the temperature in Hattiesburg dipped to 13 degrees (-11 Celsius), breaking the previous record of 14 (-10 Celsius).

Ryan Willis, a meteorologist for the National Water Service, said the forecast called for 1 to 1.5 inches of snow in metropolitan Atlanta through Wednesday morning, with localized higher amounts.

Gov. Nathan Deal issued a state of emergency for 83 counties, spanning much of central and north Georgia. This line extends from Columbus to Macon to Augusta and northward. State government will be closed Wednesday in the impacted areas for non-essential personnel.

Snow fell in a wide band that stretched from southeastern Texas all the way to western Massachusetts.

Forecasters said up to 4 inches (10 centimeters) could fall in central North Carolina as the system pushed northward, with a couple inches expected farther east.

Northwestern South Carolina could get up to 2 inches (5 centimeters) of snow, the weather service said, and Gov. Henry McMaster's office postponed his first State of the State address because of the weather.

In North Carolina, a thin white sheen of precipitation had formed on sidewalks and driveways by early morning. A handful of men sipped coffee at Waffle House, famous for staying open around the clock in all kinds of weather.

"Once I get home today I'll probably be in because I won't want to drive anymore," Paul Barbour, 60, said.

He said a cousin he lives with stocked up on groceries.

"Around here when it snows, if anyone even mentions snow, bread, milk and beer fly off the shelves," he said.