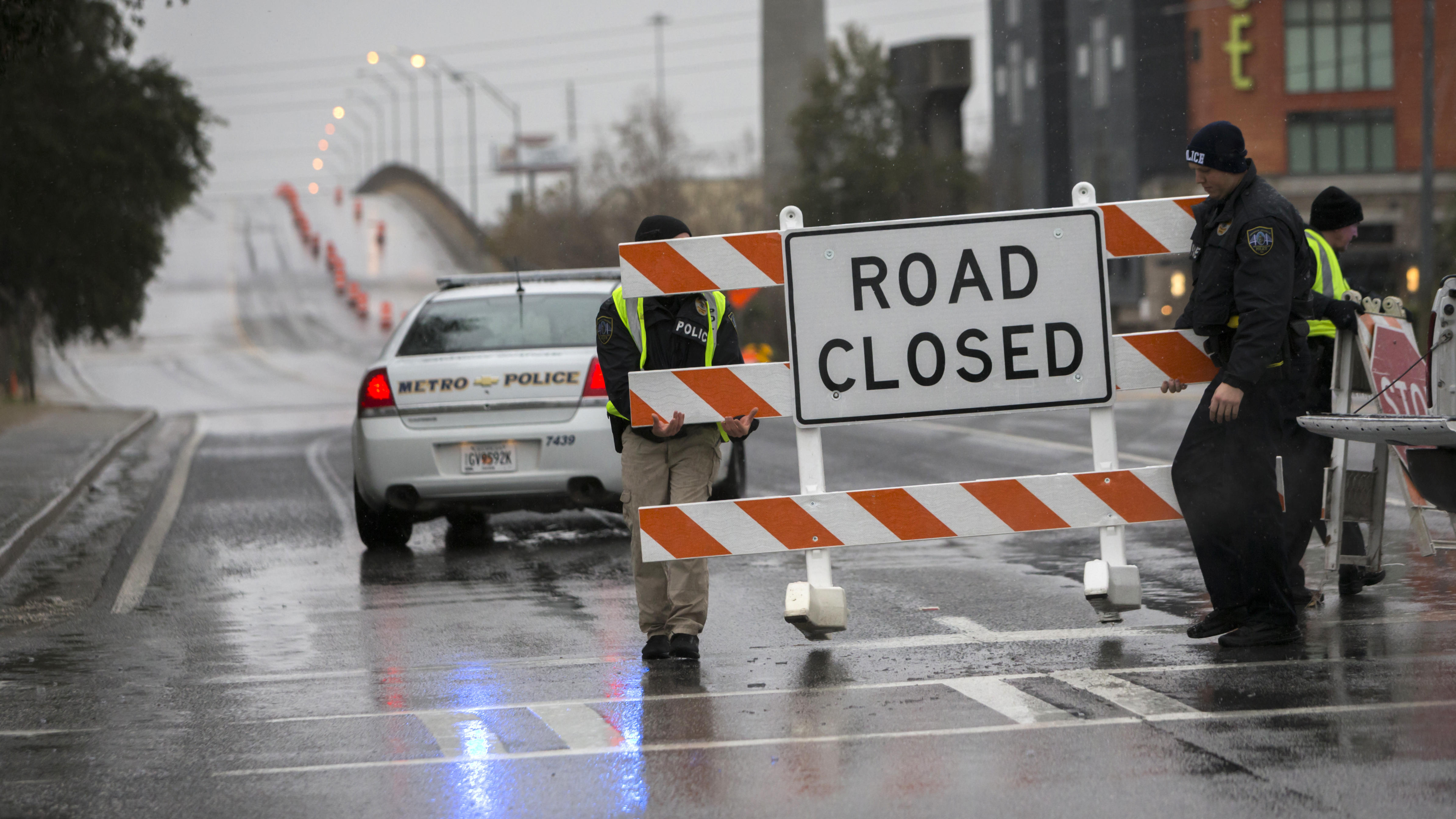 SAVANNAH, Ga. -- A brutal winter storm dumped snow, sleet and freezing rain from normally balmy Florida up the Southeast seaboard Wednesday, delivering a white coating that some cities hadn't seen in decades. Cars spun out of control on icy overpasses from Texas to Georgia.

The water park at Disney World and other Florida theme parks closed because of the unusually cold temperatures, adding to the misery of a dayslong bitter cold snap across the country.

Forecasters warned that conditions could worsen, especially in the Northeast.

A winter storm warning extended from the Gulf Coast in Florida's "Big Bend" region all the way up the Atlantic coast. Forecasters said hurricane-force winds blowing offshore on Thursday could generate 24-foot seas. Coastal flooding, downed trees and power lines were possible along the East Coast.

Schools in the Southeast called off classes just months after being shut down because of hurricane threats, and police urged drivers to stay off the roads in a region little accustomed to the kind of winter woes common to the Northeast.

In Savannah, famed for its lush downtown parks and trees draped in Spanish moss, native William Shaw used baby steps to shuffle along a frozen road from his home to the post office.

"It almost seems the town is deserted just like in the last hurricane. There's no one on the street. It's got a little eerie feeling," said Shaw, 65.

The coastal city hasn't seen measurable snowfall since February 2010. As the storm gains momentum while moving up the coast, Savannah could potentially see up to four inches of snow, according to Parkinson. Dump trucks spread sand on bridges and major streets ahead of the storm and police closed a major causeway and several bridges because of ice.

In Tallahassee, Florida, Michigan transplant Laura Donaven built a snowman 6 inches tall. The city tweeted that snow fell there for the first time in 28 years. CBS Miami reports the last time Tallahassee received measurable snowfall was in December 1989 when an inch fell.

"It was very neat to see. It had been since the early '90s since we got any snow like that," said the 41-year-old hair salon owner. "I made a snowball and threw it at my dad."

Authorities closed a stretch of Interstate 10 near the capital because of wintry precipitation.

The National Weather Service said snow and freezing rain was expected to spread up the coast to the Carolinas and warned that icy roads and low visibility could make driving treacherous. Accumulations of 3 to 5 inches were possible in eastern North Carolina.

School systems on the Alabama coast waived uniform requirements so students could bundle up.

In central Florida, the state's largest theme parks announced that water attractions such as Disney's Typhoon Lagoon, Universal Orlando's Volcano Bay and SeaWorld's Aquatica were closed. Temperatures are running well below normal for this time of year, and the lows are expected to hover right around freezing.

CBS News transportation correspondent Kris Van Cleave reports travel conditions in the south are deteriorating rapidly. There's an increased number of delays and cancellations across the nation, likely because of weather. The Charleston International Airport closed runways Wednesday morning due to icy conditions, prompting 69 cancellations. As of 12:30 p.m., the Savannah/Hilton Head International Airport cancelled 47 flights due to winter weather conditions.

In other parts of the U.S., dangerously cold temperatures have been blamed for at least 13 deaths as well as freezing a water tower in Iowa and halting ferry service in New York, CBS News has confirmed.

The National Weather Service issued wind chill advisories and freeze warnings covering a vast area from South Texas to Canada and from Montana through New England. Temperatures dropped as low as minus 19 degrees in Lafayette, Indiana.

"The temperatures are certainly extreme, but we've seen colder," said Joseph Nield, a meteorologist in Indianapolis, noting that the all-time low temperature in Indiana was minus 36 degrees in 1994.

Nevertheless, the cold is nothing to trifle with, forecasters warned.

Forecasters warned of frost bite and hypothermia in Chicago, where wind chills of minus 35 degrees were predicted. According to CBS Chicago, many homeowners are already facing the consequences of frozen or broken pipes due to bone-chilling temperatures.

Atlanta hospitals reported a surge in emergency room visits for hypothermia and other ailments as temperatures plunge well below freezing.

Warming shelters were opened across the South as freeze watches and warnings blanketed the region, including hard freeze warnings for much of Louisiana, Mississippi and Alabama.

Plunging temperatures in Texas brought rare snow flurries as far south as Austin, and accidents racked up on icy roads across the state. In the central Texas city of Abilene, the local police chief said more than three dozen vehicle crashes were reported in 24 hours.

Making the most of the South's bitter cold snap, the North Carolina Zoo in Asheboro offered discounted tickets for those willing to brave the cold to see polar bears frolic in their kind of weather, along with Arctic foxes and elk. African elephants, lions and gorillas were sheltered out of public view because of the dangerously low temperatures.