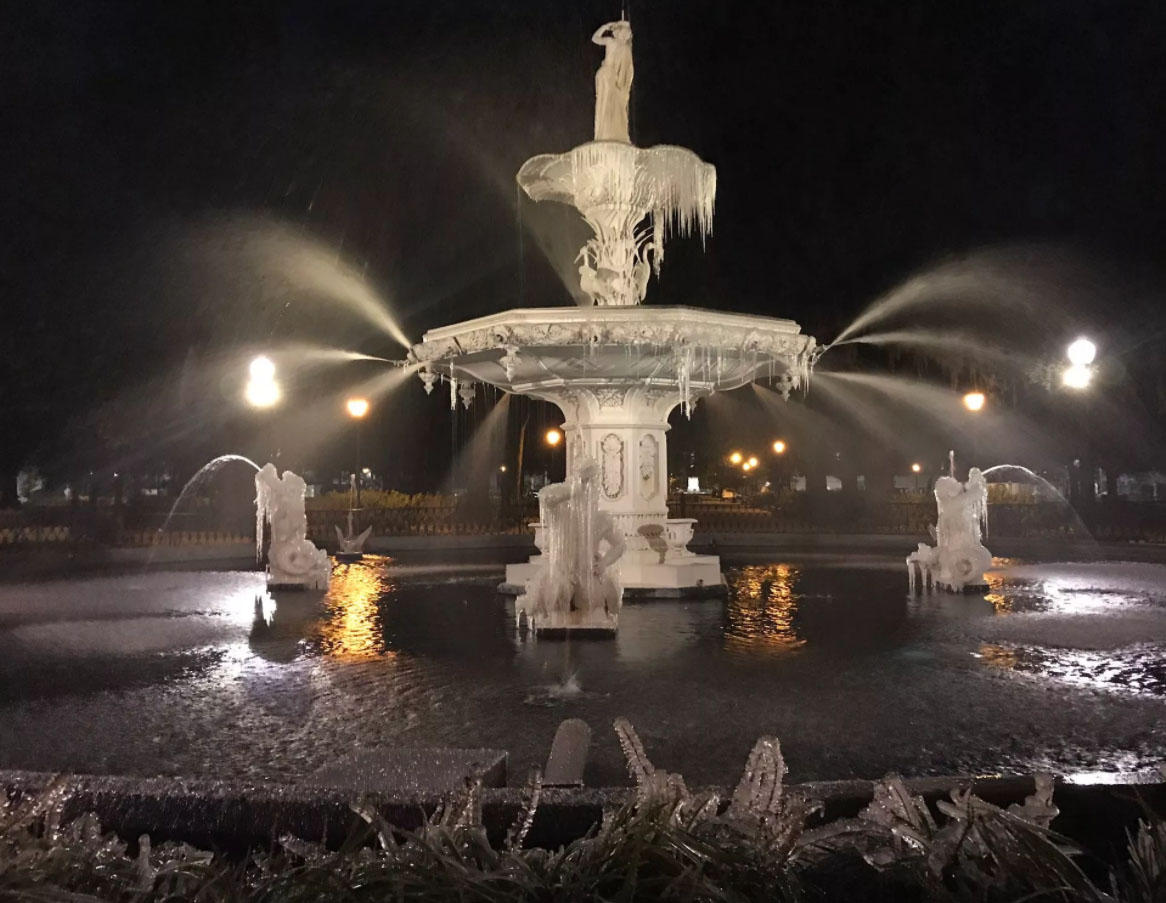 SAVANNAH, Ga. -- Brutal winter weather that's brought subzero temperatures to parts of the U.S. is threatening to dump snow and ice across parts of the South that rarely see flurries, much less accumulation.

The National Weather Service said a wintry mix of snow and freezing rain was expected Wednesday, mainly along the Atlantic Seaboard from Florida to North Carolina. It warned that icy roads and low visibility could make driving treacherous across the region.

In Savannah, a coastal city that hasn't seen measurable snowfall since February 2010, up to 2 inches of snow and sleet were forecast. As city officials filled dump trucks with sand to spread on major streets, Mayor Eddie DeLoach urged residents to stay home and keep off the roads.

"The streets will be slick," DeLoach told a news conference Tuesday. "We could have some serious issues for folks who aren't used to driving in this kind of weather."

Georgia Gov. Nathan Deal declared a state of emergency through Friday for 28 counties because of the frigid weather.

The weather service said up to an inch of snow could fall as far south as Tallahassee, Florida. Accumulation of 3 to 5 inches was possible in eastern North Carolina.

In central Florida, the state's largest theme parks announced that water attractions such as Disney's Typhoon Lagoon, Universal Orlando's Volcano Bay and SeaWorld's Aquatica were closed Wednesday because of the cold snap.

In Brunswick, Georgia, on the Atlantic coast, law enforcement agencies reported freezing rain and ice on bridges early Wednesday in south Georgia as a winter storm revved up along the East Coast. Brunswick police reported on their official Twitter account that area bridges had begun to ice up.

The icy conditions also were hampering early morning travel in Florida, as authorities were forced to shut almost 50 miles of Interstate 10 from Tallahassee east to Madison.

Overall, dangerously cold temperatures have been blamed for at least 13 deaths in the U.S., CBS News confirms, as well as freezing a water tower in Iowa and the halting of some ferry service in New York.

Indianapolis early Tuesday tied a record low of minus 12 degrees Fahrenheit for Jan. 2 set in 1887, leading Indianapolis Public Schools to cancel classes. And the northwest Indiana city of Lafayette got down to minus 19, shattering the previous record of minus 5 for the date, set in 1979, the National Weather Service said. After residents there began complaining of a hum, Duke Energy said it was caused by extra power surging through utility lines to meet electricity demands.

"The temperatures are certainly extreme, but we've seen colder," said Joseph Nield, a meteorologist in Indianapolis, noting that the all-time low temperature in Indiana was minus 36 in 1994.

In New York, the famed Niagara Falls is one place the nation's deep freeze is as much seen as felt. Mist from the surging waters has been freezing instantly on everything it touches, coating trees, walkways, cliffs and overlooks in a dreamy, brilliant white. Visitors hardy enough to withstand the bone-chilling cold are treated to snapshots and selfies in a winter wonderland.

Although everything around them freezes, the three waterfalls that make up the natural attraction between the United States and Canada continue to flow and churn up the frosty mist. The westerly wind usually blows it toward the U.S. side, National Weather Service meteorologist Steven Welch said, where the moisture wraps every inch of the landscape in white.

Nevertheless, the cold is nothing to trifle with, forecasters warned.

With Chicago-area wind chills expected between -35 and -20 degrees), forecasters warned of frost bite and hypothermia risks and urged residents to take precautions, including dressing in layers, wearing a hat and gloves, covering exposed skin and bringing pets indoors.

Atlanta hospitals were seeing a surge in emergency room visits for hypothermia and other ailments as temperatures plunge well below freezing. The temperature in Atlanta fell to 13 degrees before dawn in Tuesday.

"We have a group of patients who are coming in off the street who are looking to escape the cold - we have dozens and dozens of those every day," said Dr. Brooks Moore, associate medical director in the emergency department of Grady Health System, which operates Georgia's largest hospital in Atlanta.

Warming shelters were opened across the South as freeze watches and warnings blanketed the region, including hard freeze warnings for much of Louisiana, Mississippi and Alabama.

Plunging temperatures in Texas brought rare snow flurries as far south as Austin, and accidents racked up on icy roads across the state. In the central Texas city of Abilene, the local police chief said more than three dozen vehicle crashes were reported in 24 hours.

In New York, transportation officials suspended the Newburgh-Beacon commuter ferry service on Tuesday because of icy conditions on the Hudson River. Just north, the city of Poughkeepsie saw a record-breaking low of minus 10 degrees on New Year's Day.

In Savannah, where January's average high is 60 degrees), the temperature hovered at 30 at noon Tuesday, cold enough for icicles to dangle from the ornate wrought-iron fountain in Forsyth Park at the edge of the city's downtown historic district.

"I've never seen icicles in Savannah, period," said Sean Dempsey, a local restaurant manager who wore a hat, gloves and a thick coat to walk his dogs Tuesday. "I'm pretty sure last year at New Year's lots of families were in the park playing catch, Frisbee football and stuff like that."

But making the most of the South's bitter cold snap, the North Carolina Zoo in Asheboro offered discounted tickets for those willing to brave the cold to see polar bears frolic in their kind of weather, along with Arctic foxes and elk. Nonetheless, African elephants, lions and gorillas were being sheltered out of public view because of the dangerously low temperatures.