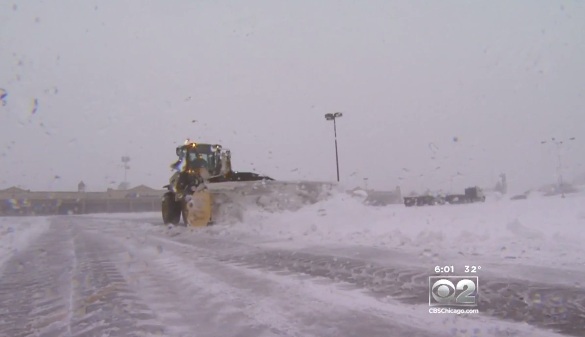 CHICAGO -- A powerful storm brought heavy snow and biting winds to parts of the Midwest on Wednesday, leading to mass flight cancellations at Chicago airports and school closings in several states.

In Pennsylvania, state police confirmed to CBS News there was structural damage in the White House area.

CBS affiliate WHP reported that crews in Lancaster County responded to reports of several collapses Wednesday night following a tornado warning being issued in the eastern part of the county. Emergency crews were focused on Sailsbury, Paradise and Leacock townships, off of Route 340.

As the evening rush hour got underway, the National Weather Service warned the wet snow falling in Chicago, its southern suburbs and northwest Indiana could make travel very dangerous. The weather service said motorists should avoid the roadways if possible.

"The driving is terrible," said Dan Hale, a South Bend bus driver transporting residents of a downtown senior center on a shopping trip. "The plows have been out and they've been doing what they can, but you just have to be careful, take it easy. We can handle this."

Northern Indiana was expected to see the heaviest snow, as powerful winds blowing off Lake Michigan could keep snow piling up past midnight and bury the area in up to 18 inches. State Police said northbound lanes of Interstate 65 in northwestern Indiana were closed temporarily due to jackknifed semitrailers. Two counties in the area issued declarations permitting only emergency vehicles on the roads and warning violators could be ticketed.

In South Bend, in addition to slick roads and slushy sidewalks, the National Weather Service was reporting wind gusts of up 30 mph late Wednesday afternoon. But Kevin Koak, owner of Saigon Market Oriental Food, was not impressed as he plowed his parking lot and cleared the sidewalk.

"The way they were talking about it, I thought it was going to be really bad. I mean, this is nothing," he said.

In Michigan, the winds were so strong, they caused the Saginaw River to swell and appear to flow backward, though it remained well below flood stage, The Bay City Times reported.

The winter weather warnings from the National Weather Service stretched southwest through all of Illinois and into Missouri, where several inches had fallen, leading to school closures and downed power lines. Blizzard warnings were posted for counties in eastern Illinois and northwestern Indiana.

Real estate agent Debora Auble had shoveled snow and salted sidewalks at three homes and her downtown office in Champaign, Illinois, by midmorning Wednesday. She wasn't exactly enjoying it.

"To be in and out of it is pretty brutal," she said as police cleaned up following what appeared to be a minor traffic accident outside her office. "And the roads are really treacherous. It's been a long time since I've seen the snow blowing that you can't see the traffic lights."

Just about every school was closed in Champaign. But students at the University of Illinois, which almost never closes, had to trudge through biting, wet snow.

Bands of heavy snow extending from St. Louis to Chicago caused several semis to jackknife and power lines to fall on Illinois highways. Winds left behind three-foot-high snow drifts on one interstate. State police said travelling was "extremely dangerous" and urged people not to venture out unless they had an emergency.

Some schools in Michigan and Indiana cancelled classes.

"It's a good thing we closed," said Superintendent Tom Fletcher of the Twin Lakes School Corp. in Indiana. "Our roads are ice-covered and the wind's howling and the rain and the snow is coming down."

Michigan closed many state government offices, but kept its Emergency Operations Center open to manage the water crisis in the city of Flint and monitor the storm. The state kept open bottled water and filter distribution sites in Flint, which is under a state of emergency because of its lead-contaminated water supply.

Flint was expected to get 8 to 12 inches of snow, and officials urged residents to make sure they have enough filters, cartridges and bottled water on hand.

Drivers were warned that there could be no visibility at times on the state's roadways.

Meanwhile, down South, three people were killed in Sussex County, Virginia, after an unconfirmed tornado hit the town of Waverly on Wednesday afternoon, police told CBS affiliate WTVR, raising the death toll from the tornadoes and severe weather in the South to six.

The bodies were transported to the Office of the Medical Examiner in Norfolk for positive identification.

Debris was seen strewn through the streets, trees were downed and there was significant damage to homes.

Three people were killed in Louisiana and Mississippi when tornadoes hit there Tuesday. Dozens of other people were injured.