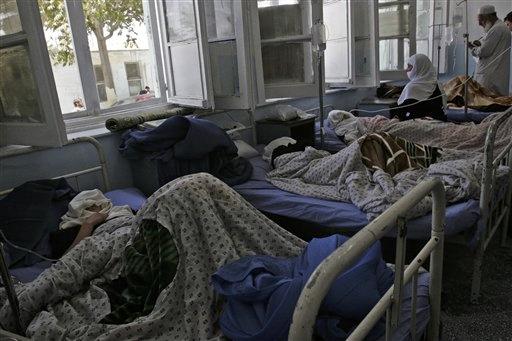 Ukraine's election commission declared the Kremlin-backed prime minister, Viktor Yanukovych, the winner of the country's bitterly disputed presidential election, sharpening a crisis sparked by the opposition candidate's allegations that the vote was fraudulent.

Opposition candidate Viktor Yushchenko has insisted he was the winner of the weekend run-off election, and tens of thousands of his supporters have been in the streets demanding the official results be overturned.

Within minutes after the results were announced, thousands of them began heading from their encampment on Kiev's central avenue to the presidential administration building.

Prime Minister Yanukovych got 49.61 percent of Sunday's vote, against Yushchenko's 46.61 percent, the commission said in giving its final results.

Many Western election observers said the vote was seriously flawed and did not meet democratic standards, and exit polls showed a victory for Yushchenko, a pro-Western reformer.

The election has led to an increasingly tense tug-of-war between the West and Moscow, which considers Ukraine part of its sphere of influence and a buffer between Russia and eastward-expanding NATO.

Prior to the commission's announcement, Russian President Vladimir Putin had already congratulated Yanukovych on his victory, and the Kremlin-controlled Russian parliament denounced the Ukrainian opposition for its "illegal actions."

Yushchenko and his allies have accused authorities of rigging Sunday's vote in favor of Yanukovych; Western observers also criticized the vote, and had called on Ukraine to review the allegations of fraud before declaring a final victor.

The opposition supporters have taken over blocks of Kiev's main street, setting up a giant tent camp. There has been a near-total absence of police officers, although as opposition supporters marched to the presidential administration building Tuesday night, they met phalanxes of riot police outside. The stand-off ended without incident.

Yanukovych supporters have become increasingly visible in Kiev, setting up hundreds of tents on a wooded slope about a half-kilometer (0.3 miles) from the opposition's even larger tent camp. They shouted their candidate's name throughout the night, and at one point a car bearing a large Yanukovych banner drove tauntingly past the edge of the opposition gathering.

MMIV, The Associated Press. All Rights Reserved. This material may not be published, broadcast, rewritten, or redistributed