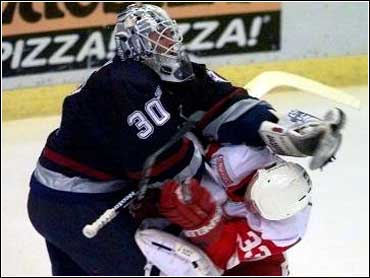 After three straight impressive road victories, the Detroit Red Wings certainly didn't want to let down when they returned home.

Captain Steve Yzerman made sure it didn't happen.

Yzerman scored two goals as the Red Wings took their fourth straight victory, 5-2 over Vancouver, to move within a point of idle St. Louis for the Central Division lead.

Yzerman said the Red Wings know that winning the division is probably the difference between being seeded first and no better than fourth in the playoffs. Anything lower than fourth means no home-ice advantage.

"Every point that you don't get is harder to make up," Yzerman said. "St. Louis just isn't going to lose a lot of games. Also, if you finish fourth, fifth isn't that far behind, either. So you're in a battle for first and fourth, for that matter."

"You really have to play hard all the way down, which is good because it prepares you more for the playoffs when you're in a real struggle toward the end of the season."

Gilchrist's second-period score was the last of four unanswered goals for Detroit. It was his first of the season in his second game after he missed the first 56 with a severe groin and thigh injury.

"It feels awesome," Gilchrist said. "I guess when everybody says `you're back' it's great, but I'm cautious. I have to prove I'm healthy enough to prove I can play every day. I guess tonight gives me a lot of confidence I can go ouand play."

Andrew Cassels and Todd Bertuzzi scored for the Canucks, who have lost two straight and five of seven. Vancouver is in last place in the Northwest Division.

"They hustled and played really hard and we didn't match that," Canucks center Darby Hendrickson said. "We knew we had to play a good game. They played well in all areas. Not only did they play well offensively, but they backchecked and played well on defense, too."

Chris Osgood made 30 saves for Detroit and Garth Snow stopped 32 shots for Vancouver.

Yzerman went 11 games without a goal before his two first-period scores.

He skated in between the circles with a pass from Pat Verbeek and lifted a shot over Snow, who was falling, just 4:26 in.

"We made a really bad mistake on the (first) Yzerman goal," Canucks coach Marc Crawford said. "You can't stick-check him. You have to play the body, and he hurt us. That's why he's paid as much as he is and why he's that good a player."

Yzerman scored again on a power play at 13:49. His shot from the right circle went through the legs of teammate Tomas Holmstrom parked in front of the net and past Snow.

Fedorov made it 3-0 with 20.9 seconds left in the first when he skated in with a pass from Igor Larionov, pulled up just outside of the right goal post and flipped the puck into the net.

Gilchrist scored the lone goal in the second with a backhander from the right circle on a partial breakaway at 15:02.

Cassels spoiled Osgood's bid for his second shutout in three starts by converting a cross-ice pass from Markus Naslund on a power play 7:17 into the third.

Shanahan answered with his 31st goal, matching last season's total, to end a pretty three-way play with Martin Lapointe and Larionov at 13:10.